No double Standard Between auto and Financial Executives, Prove it! 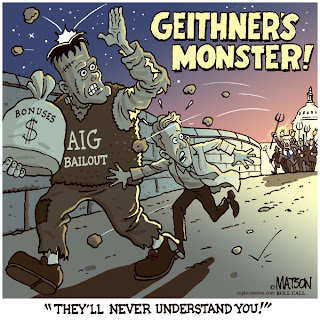 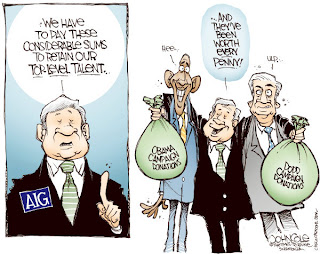 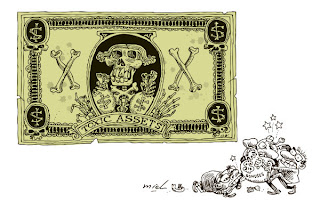 Obama has been taking some heat as you know for saving banks while they took huge bonuses and abused American taxes and good intentions! After dumping GM's Wagoner as he should have he better get to work in the financial sector. That was infuriating but the firing of GM's CEO Wagoner while deemed necessary ticked the people off citing duplicity, double standards.

We are led to believe Obama and Geithner will come down on Financial CEO's if necessary. transcript of Geithner, I have and will fire more financial CEO's

Obama has said that he will get tough on Wall street. He also warned wall street that the only thing between the executives and the pitchforks was him. You have to believe that Getting rid of a couple Wall Street CEO's will do a world of good for both the markets and public sentiment. From one commenter: For instance guys like Ken Lewis and Vikram Pandit have absolutely zero credibility with the market (and granted Pandit came aboard after the problems happened).

Getting rid of them would boost confidence in those two banks which are arguably the weakest on the street and therefore help boost confidence in all of the banks. It would also boost sentiment with the pubic since right now the impression is that Wall Street dictates its own terms and feels entitled to everything including millions of dollars in personal take-home pay funded by taxpayers after the banks have devastated the economy with their irresponsible but self-enriching bets.

The biggest boost I think would come from taking a hammer to Goldman Sachs which has been one of the biggest recipients of taxpayer bailouts (through AIG) yet seems to avoid any real scrutiny and continues to get what it wants given their connections in the government. If Geithner and Obama really want to prove they are in charge and not just patsies for Goldman Sachs and the rest of Wall Street they need to take the actions any executive would take - get rid of the waste.

We are told by Geithner he will do what he has too to protect our money but many of us believe it to be a lie Now I read the story at the link and it is more than believable! I'm sick of being played for a fool. Economic Professor William Blackan ex Bank regulator and former savings and loan prosecutor says Geithner's bank stress test is a sham. It is designed to fool the public and once again we are playing the fools! I figured that like many of you did anyway. Blackan paints a believable picture though and says Geithner believes that if he lies convincingly we will believe him and all will be well.
it's a sham and rising stocks show bad news

My word: I do not like being lied to or this feeling of helplessness. I guess I just have to place my faith with Obama. In this instance I do not like it! I hope the saving grace once again is we have a President again who wants to do the right thing for average Americans. Unlike Bush who said he would rather listen to his dog Obama is listening to us. He is listening to the world as you know.

Back from his successful first world tour his European vacation, he set the correct example with GM I now want to see him focus on revamping Wall street as it should be if he really wants to help us not capitalism. Obama said he wants to see GM survive but there will be some important changes. Okay, they are needed! However I also want to see big changes at A.I.G. also known as America's Insurance Giant. I want to see changes on Wall street because they are needed too. Myself I feel Capitalism is being protected at our expense and I am sure hoping Obama is looking out for us. Ally my concerns President Obama!

James Joiner
Gardner, Ma
www.anaveragepatriot.com
Posted by jmsjoin at 5:51 AM

First I think Obama is in a damned if you do damned if you don't situation. It's impossible to save every industry as much as we'd like. So who would you save first? Without the banks nobody works. The few trillion dollars that was put out as a rescue pales in comparison to the 47 trillion in credit default swaps and the option mortgages that will come due in the fall of this year. If something wasn't done the system would remain frozen. So as you can see Obama's solution is but a spit in the bucket comapred to size of the problem. Then of course we have the other 800lb. guerillas wating in the wings - health care and social security which should have been addressed years ago and as the population ages and heads into retirement there isn't enough income and won't be to support those programs.
I kind of feel for Giethner in that all he can give us is bad news or worse news. It's not just capitalism that they're trying to save here. It's the whole of America because like it our not we're all in this together as Red Green always said.

Demeur
Obama's job is really overwhelming. It is something when you say a few trillion is paltry. Sadly it is compared to the over all picture.
It has gotten much worse but when Bush was President I did a post on the fact that our real debt is 54 trillion and you can Google that. I can just imagine what it is now or how bad it will be!

I say it's time to break up the banks into smaller entities. Why do we need these huge banking institutions? As for the American Automotive industry, isn't it time we took the best and brightest from these companies and put them to work designing and manufacturing the next generation of fuel efficient or alternative energy vehicles? It is time to be proactive and stop acting after the fact.

All right Robert
Hope you have been well! I agree! I would be leery of trusting them with anything! GM is coming out with their answer to bring them back, the Volt, a $40,000 electric car. That will finish them off, a short circuit.
Iaccoca paid the Government and brought Chrysler back the average mans care the K car. They don't want a come back. Seems like they purposely want to be cut up and start over.

The problem started when banks were allowed to consolidate and move into arenas previously not allowed. Insurance has a lot of the same problems. They should, indeed, be busted up and strictly regulated; it's the only way to prevent this from happening again.

The Rushpublicans, of course, are STILL arguing for even more deregulation, which is really all you need to know.

Jolly
Bankruptcey should go its natural course. They will break up and come back more competitive.
They have been kept together to keep capitalism alive. Those idiots on the right are really concerning me!

I have a problem with chastising and dictating to the auto companies, while letting banks and insurance companies get billions upon billions free and clear.

It's obvious who or what controls politics in America and it isn't the auto companies.

You guys missed a few things here. The large banks will get larger because we gave them the money to buy the weaker ones. What did some of the banks do when they got bail out money? They went out and bought other banks. PNB comes to mind. This is a fire sale plane and simple. AIG took the money and paid off their CDS to foreign companies. They are now in the process of selling off their bad assets and cutting payroll and yet they want more of our money as they pay out billions in bonuses.

You are mentioned there

I agree Larry! Supposedly there is now going to be equal treatment, I want to see it too!

Demeur
You are right! Years ago we forced break ups when their was a large monopoly. Today we appear to be paying for it to happen. In the auto Industry it seems like the big three is going to be the big one Ford. I just can't stand this!

Hi Sarah Sofia
I will check that out so thanks. It must be new because I check you out every day now too. See ya!

Sarah
I have to laugh! I just tried to comment but it would not load and the words were in another language so I did not know what it said so here you go:

Congratulations! You have been busy. Lisa is a good heart as is Brother Tim. Just coincidence but all the blogs you list I converse with. Love your use of both languages. Take care!