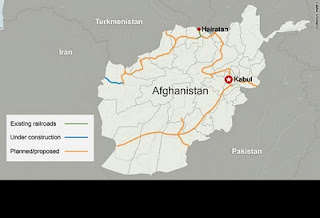 Afghanistan joins railroad era—100 years late: More than a century ago, fearing that his country might be swallowed up in the Great Game rivalry between the British empire to the east and the Russian army to the north, an Afghan king made a radical decision: He banned railroads. That edict effectively kept out foreign troops for a number of years. But it also left the Afghan economy, once a wealthy crossroads of the ancient Silk Road trading routes, largely cut off from the world at a time when trains were the engines of development.

Now, Afghanistan has just opened its first major railroad and is planning a half dozen more. The government is also inviting other countries to build tracks, part of plans for a "New Silk Route" that the U.S. hopes will help stabilize the region by promoting trading links. China, Iran, Pakistan and India all have government or corporate plans for separate railroad projects across Afghanistan. Turkmenistan is completing its own plans for another line. And Uzbekistan has already built the first major rail link.

I have to tell you. I spent a couple hours researching the China Afghanistan Border along with the railroad and China's considerable interest in Afghanistan. During Afghanistan's war with Russia China cooperated with the US and was sending arms and supplies to the Mujaheden. They have a small border with Afghanistan and a crossing that was closed in 2001 because we attacked Afghanistan.

China for some reason seems to be the country benefiting the most from our entry into Afghanistan. Since we have gone there we have discovered considerable natural resources that require a railroad structure in a country so untamed, mountainous, and expansive. The Taliban if they play their cards right can allow these riches to be exploited while living their preferred life styles. This can be a win win for them or a continuation of their war tribe existence.

In recent years a lot has been coming too light, Afghanistan can be the Saudi Arabia of Lithium The China of Capitalism, success or failure of tribalism is up to them, Afghanistan the curse of natural resources! As you know, US geologists found $1 trillion of mineral reserves in Afghanistan, the deposits, which include large veins of iron, copper, cobalt, gold and lithium are so large they could alter the Afghan economy, American geologists said after discovering the resources. I would expect China will get those too.

Plans were announced to start mining copper in the Aynak valley, southwest of Kabul, which holds one of the world’s biggest untapped copper deposits, estimated to be worth up to $88_billion (£44 billion) – more than double Afghanistan’s entire gross domestic product (GDP) in 2007.

In November, 2008 a 30-year lease was sold to the China Metallurgical Group for $3 billion, making it the biggest foreign investment and private business venture in Afghanistan’s history.

However despite the finds, with no mining industry in place it would take decades to develop an infrastructure to exploit the vast mineral reserves which are scattered throughout the country including along the border with Pakistan where some of the most intense fighting has taken place. US geologists find $1 to $3 trillion of mineral reserves in Afghanistan: The U.S. Department of Defense earlier said Afghanistan's reserves of iron, copper, cobalt, gold and other prized minerals could be worth $1 trillion. Shahrani says that's conservative. Afghanistan is working with international "partners. I am sure that means China almost exclusively.

There are 1 to 3 trillion dollars worth of mineral resources alone. Enough to make them a power house if they could only come together in some manner and had someone in control of the country that knew how to capitalize from it. They are throughout Afghanistan including the Afghan Pakistan border which is significant to me.

There is enough lithium alone to power laptops computers Ipads Ipods everything you can think of in the age of lithium batteries, the 21st century. The heck with copper mines pipelines and oil and gas this could force the Taliban into being the China of Afghanistan allowing Capitalism to facilitate their preferred lifestyle of tribalism as the Chinese have used it to further communism.

Extensive natural resources have been brought to light of late, the only thing lacking is a secure environment to bring them to market and the means which is the railroad. Many railroads are in the works and I see great things for Afghanistan if they can stop their infighting long enough to figure out an equitable way to divvy up the spoils.

Being devoid of railroads until this point in time could be the best thing that ever happened to Afghanistan. The natural resources have been left intact due to the tribal lifestyle and desire to keep the land wild. The resources are there now and the means to get them to market are being built, Afghanistan can now have the means to live the lifestyle of simplicity that they want by controlling Capitalism for their desires as China does for theirs. The future could be bright for Afghanistan like has never been possible before. I hope they take advantage of it and are allowed to control their destiny as they should be.

James Joiner
Gardner, Ma
http://anaverageamericanpatriot.blogspot.com
Posted by jmsjoin at 2:30 AM 2 comments: Links to this post