Misrata Libyans now fear chemical weapons are coming next, me too 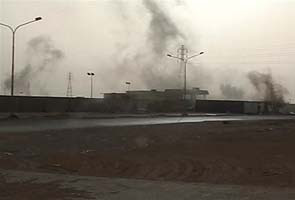 Moammar Gadhafi's forces used tanks to shell the besieged western town of Misrata on Monday, as rumors fueled fears that the Libyan leader was preparing to use chemical weapons. Hundreds have been killed in Misrata over the past two months as Gadhafi has attempted to seize the only major rebel bastion in the west of Libya

The Libyan government said Sunday that ruler Moammar Gadhafi's son and his three grandchildren died in a NATO air strike, and vowed to retaliate with death to "invaders" in the nation. That was predictable but the rebels better be even more fearful and wary of horrific methods and forms of slaughter being used on them.

This is only going to make him slaughter more people. He and his children will go nowhere, they will have to be killed.He is slaughtering his people and it is a must he be targeted. Anyone around him can not be considered a civilian as they are complicit in the slaughter. Remembering his original statement many thousands will be killed I am afraid he is getting closer to using his cyanide, mustard gas and vast reserves of chemical weapons.

We are getting dragged into a third protracted war with a Muslim country. This is going to work against us. We are also gearing our navy with weapons to deal with the unique threat Iran portrays in the Gulf. We are getting more involved with Syria which will bring Iran on. I am absolutely nonplussed over all this! We are getting dragged into a vicious protracted ground war unless we can target and kill all Gaddafi's and their followers and I do not see that as a possibility.

Gaddafi is right now issuing gas masks to those doing his murdering for him. What choice will we have but to drop a MOAB (mother of all bombs) or a 30,000 pound bunker buster in the middle of his compound designed to dig 7 or 8 stories underground before detonating and take as many of them out as we can. They are not going to relent period. WTF?

Fear not Jim. The weapons Daffy is using are old Russian made stuff. In talking to a Ukrainian co-worker who was in the Russian army when they sold this stuff to Libya he said he couldn't believe they'd buy that crap. It was junk. Tanks that barely ran. He even pointed out the models as they were shown on the morning news. And if the mustard gas is as old as those tanks the that stuff is no good either. It has a shelf life.

I know they bought junk and haven't maintained equipment but knowing that mad man and what he could have gotten since I wouldn't want to rest on that.

I did a part 3 or 4(?) the other day on this Libya crap too ... only because I was opposed to the taking out Gaddafi's children or grandchildren the way the news was reporting it as "good news" ... being that these tactic's will maybe scare him off to step down ... Jesus F'n Christ! ... WTF is that?!! You want the dude out? ... take him out ... "F" all this beating around the bush crap ... use a goddamn covert style op, target and nail his ass. One ole boy (commentor) told me ... Libyan's want us there, and we have to do this, etc ... which is fine ... but Jim ... were running tight budget's here in our own bloody country ... and for me Jim ... dropping multi million dollar's in "wolf" bomb's to try to scare him off is a waste of time and money (scare him off to where?) ... just take his ass out some other way .. it's too hard?, difficult?, cant be done?, other excuses? do we not have all kind's of MF's on the payroll to try to figure out a bloody way to do it? I mean ... that's what their getting paid for! It's the EXPENSES of all this crap that is driving me up a wall Jim ... then when you take out only the bloody grandkid's ... were going to look like child murderer's ... and frankly we are ... because if it wasnt frankly for these goddamn new emerging mega market's of China and bloody India ... we wouldnt even be in half these rat trap's! Yeah .... all this crap is about saving live's and humanitarianism ... and I'm Willie FooFoo too.

No don't shut up! Too me he is a mad man slaughtering murderer and of course he is fair game as is his f'd up daughter and sons involved in this.

Knowing he is a target his family should be warned to stay clear of him or hazard their own life.

You read my stuff, my answer is to drop a MOAB in the middle of his 4 acre compound or a 30,000 pound bunker buster designed to drill down 5 or so stories before detonating and call it a day.