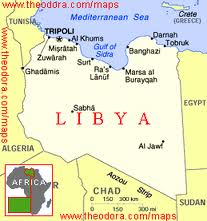 France, NATO to deploy helicopters in Libya: source The French source said the move could not be considered as part of a strategy to use ground troops in the conflict. NATO also says shelling Libya's military assets from their naval ships is also a possibility so I have to wonder when boots on the ground will be necessary and whose they will be. We are getting reeled in and I do not like this!

Daily life begins to return to MISRATA: Less than two weeks after wresting itself free from a brutal siege and pushing Moammar Gadhafi's forces out of rocket range, the rebel-held city of Misrata is taking its first steps toward normalcy. The city, the only major urban center in western Libya under rebel control, was ...

NATO bombs Libya; rebels seek EU funding Glad to see this is going the way of the rebels and wonder what Libya and the region will look like without Gaddafi? That said it sickens me that we have frozen multiple $Billions of Gaddafi's assets and the rebels have been selling oil so I refuse to believe they are looking for funding. Stupid us will give it to them to. At the very least they should be given Gaddafi's Billions and should be paying us for the personnel and materials used in our efforts to help them acquire their freedom.

We are beginning to recognize the rebel Government more and more and more of the world are coming forward and speaking up against Gaddafi., that I am afraid means we are in this for the long haul and will have to come to the rescue if this goes south instead of leaving the rebels to their own demise. I am very concerned because this is not just Libya, this is all the tribes in the region many of who are right now recieving $1000 a day to fight for Gaddafi. I am convinced the end of Gaddafi is just the beginning of this mess.

I am afraid this is just beginning unless we can kill them all and we can't so WTF are we doing there? We can't go in Osama style with seal team 6. Our only option is to get the hell out of there and supply the rebels with arms food money and medicine unless Gaddafi tries to mine the sea ports again. I said it when we first got involved in Libya but this whole thing just blows me away. Then there is Syria, Iran, and the rest of the middle east and Africa.

I said from the beginning in Libya that if we are serious we had to go directly after Tripoli and Gaddafi's extensive military assets there. We are finally doing that. If there was a way to totally neutralize Gaddafi's heavy weapons and defenses those rebels may stand a chance. Still, remembering Gaddafi's original statement that many thousands will be killed I am afraid he is getting closer to using his cyanide, mustard gas and vast reserves of chemical weapons.

Gaddafi already issued gas masks to those doing his murdering for him. What choice will we have but to drop a MOAB (mother of all bombs) or a 30,000 pound bunker buster in the middle of his compound designed to dig 7 or 8 stories underground before detonating and take as many of them out as we can. They are not going to relent period. We can not get any deeper than we are so I am happy to see the rebels making gains but leery with Gaddafi forces encroaching on Tunisia and attempting to widen thus war or whatever you want to call it..


James Joiner
Gardner, Ma
http://anaverageamericanpatriot.blogspot.com
Posted by jmsjoin at 3:00 AM

I sure dont know as much about this stuff as you Jim, so forgive perhap's some of my statement's that may sound dumb or absurd. But now I am wondering how many year's we will have to be here? This so called NATO war. As far as freezing Ghadaffi's asset's/ fund's and who will pay for this .... who do you think? If we cant even get the Chinese to help us fighting for their country they are going to take over which is Afghanistan, not to mention the other foreign crap we get stuck with the bill for, especially Iraq, even when they were raking in money from oil it was safeguarded in New York bank and the American taxpayer's were paying for EVERYTHING, to think anyone would get any of Ghadaffi's money beside's rich people would seem insane to me, or even thinking that it would go to fund anything on our behalf. As I said ... American's are the biggest sucker's in the world, with a gvmnt that dont give a rat's ass about it's own country, and people too lazy to think and vote. Of course if this was my issue, I wouldnt be in any of this mess to begin with ... because first I wouldnt have supported a thug and built him up for year's, and secondly I wouldnt even get involved in a domestic war halfway around the world, that doesnt do a damn thing for me or the people in my country except send us bill's and our childern back home in body bag's ... Libyan people are getting killed? People on the street's of America are getting killed and every other goddamn country on the earth damn near. I dont give a shit to be involved with a bunch of war's that a bunch of crook's/ wealthy started either.

A Question I like to ask you Jim ... If say USA had a civil war going on (just make believe) and we had martial law declared and citizen's were getting killed in our street's daily, etc ... do you think that any of these countries we are involved with half way around the world would come in here, put boot's on the ground as you call it, perhap's fly in food, clothing to us, and pay for it all? And if they did ... what would be their motive and price in return?

It really sucks doesn't it RC? We just invited the rebels to open an office in Washington, next step is recognition. We are just getting deeper and deeper and it pisses me off.

You know, you are closer than you think but it might have been 2006 and I wrote about it many times. I remember when Bush had a secret meeting here about declaring martial law.

Congress was so horrified they spoke to the press about it. I will get you the link if I can find it. The you tube video was removed. At any rate no one would come to our aid!

I found 19 of them but here is the link to just one.Here

"Martial Law" and Bush?? ... well Jim, I never thought this country ever needed martial law for any reason today ... I mean, right now as it is, you have more goddamn law's than you can shake a stick at, if they wanted to bust you for farting on the wrong day in public (joking example) they probably could. My respect for law's id a tad limited you can say, because none of the people make law's, and many who propose the legislation on Capitalism Hill are lawyer's anywayz, and their all made for so called "our own good", heh, heh, heh, heh, heh ... you know Jim ... this society is so full of shit to begin with.