Obama Backs Deal between Israel and Palestine Based on 1967 Lines, Netanyahu cries foul 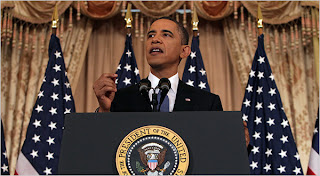 Syria: Assad regime denounces sanctions, says they serve Israel, Obama's speech proves Arab spring and everything in the middle east is about Israel

Troops deploy in Syrian village: Syrian troops backed by tanks deployed in a border village on Thursday, witnesses said, ignoring growing pressure from Washington, which imposed sanctions on President Bashar al-Assad for rights abuses. From the Lebanese village of Boqaya, Syrian soldiers could be seen across the border deploying ...

Obama addressed the Arab spring and what he and Bashar Assad said put everything from Bush's attack on Iraq to get into the middle eat to democratize as many countries as he could and create a buffer zone for Israel into perspective. You know I am a big picture guy! You have to look at the full picture not just a snapshot.

Assad is right, sanctions against him and Syria are to help Israel. I now have to wonder why we are really backing all these middle east and African nations in their bids for Democracy. I now wonder who al our sanctions really benefit. yes hopefully they help those fighting for their freedom. Yes hopefully sanctions benefit us as we attempt to create an environment beneficial in coaxing current dictators to allow their citizens to have their Democracy. However I now think bottom line is to create good neighbors for Israel who must live with their Arab neighbors. It is the Persian Iran I worry about the most.

I thought that was another great speech Obama gave on expectations for the middle east but speaking about Tunisia, Egypt, Libya, Bahrain, Syria, Israel Hamas, and Palestine it was all about Israel. I was impressed when He came out and said Israel must go back to the 1967 borders which I do not believe they will ever do but he is the first US President to take the right stance. Obama Backs Deal Based on 1967 Lines

As Obama Endorses '67 Borders, Netanyahu Objects Of course, they do not want a two state solution and they will never share Palestine.

As we discussed there is a rising cry around the world for Israel to return to 1967 borders but they do not care and never will, only Israel matters to them period!

The only thing to do is to force the instigating war mongers Israel to adhere to 181 or leave them to their own demise and Iran would see to it. You know, first reading how Israel and Palestine was allotted their territories in 1948 I do not condone that Israel has not been forced to adhere to that resolution. We, the US Britain and Europe especially are as guilty as Israel for not insisting Israel adhere to UN Resolution 181

Anyway our President's have been shoring up the dictators in the middle east as long as they do our bidding for a century. President Obama is the first one to come out and back the people not the dictators regardless of his motive. Bush started this middle east democratization and failed because he tried it by force. Obama will succeed because he is letting the people who want it take charge.

Bush failed to capture or kill Bin Laden because he was focused on Iraq, Iran, and creating a new middle east order for Israel. Obama focused on Bin Laden and got him while the people in Africa and the middle east worked on democratizing the middle east as they want it not us and that is the key. I have to be concerned about Iran because they are not and will not sit still for this.

In closing it is time to put this entire package called a new middle east "dis"order together and I believe Obama is the only US President who can do it. He must be reelected to work on it and he will be. The one feat that will elude him and the rest of the world that wants to see it happen is the implementation of a two state solution between Palestine and Israel. I do however see peace between those in the Arab spring and Israel as Democracy and getting along is their goal not Sharia law or Muslim Supremacy. Islamists are trying to keep Bin Laden's message alive but to those in the Arab spring the message died with Bin Laden.

I wonder about the monetary implications of all of this reshuffling in the Middle East and Africa. Was there going to be a movement of money out of U.S. treasuries in that area? Although small by comparison to Chinas' investment with us I'm sure the impact would be substantial if all nations in that area of the world started to shift money elsewhere.
Remember this is never about freedom liberty or justice. It's always about money resources and power. Just look at gas prices and ask yourself who's winning? It isn't the consumer.

We have been hearing rumors and sometimes threats so you never know. I heard too that we did it to keep China away but I think China would rather see the people stepped on. It stinks but we will never know the truth about anything.

Howdy Jim! (lil past midnight Dallas ... I put the time because this label's me as west coast time)

I just seen a news clip earlier on CBS where now Pres. Obama isnt going on the Israel and the 1967 map(??) he was sitting with Yahoo and talking with him on it, and of course Yahoo said he want's peace, his homies want peace, Palestinian's want peace, the folk's across the street want peace ... there was so much goddamn talk about peace and kissing each other's asses(with yuppes taking note's), I had to turn the bloody tele off! :) I alwayz try to look at the whole picture actually Jim ... I'm about sick of getting involved with all these folk's, got to the point where I dont care if they have peace or not. Of course my "vision" would never happen, and that would be to pull all our troop's out of these region's and do what many of them folk's over there want us to do ... stay out of their business, their culture and everything else. As far as Israel harming the Palestinian's any more ... if I was Israel in the middle of that rat trap over there, and Palestinian's were to continue to shoot them missle's or whatever in my backyard,whether the NATO, UN, US, or even God told me to restrain ... I would go hog wild with every weapon and bomb I had and just start wasting all them ... I mean ... your going down, you might as well take as many of your enemy down with you. People like bin Laden I have to give credit to, too ... they do what they say and take action, these over here in America (not our troop's, but our political flunkies) play game's with sanction's, talk, spending, and other shit strictly because of business. I would pull out, stay out, and even cut all the immigration from these region's to our country ... then they have nothing to "f" with us over ... were out! They attempt or start with bomb's ... I'd wipe their whole population out, my humanitarianism has limit's Jim, but that's just me ... and these folk's business is not mine or part of my culture. I know some blooger's will say ..."well, alot of people over there want us there ..." ... well that's fine and dandy, Ya'll go there ... but I wouldnt want to be there, or spending out the ass, to go on for decade's more with this crap, and may the best man win. I know damn well (looking at the whole picture) that 10 to 20 year's from now, were really going to be bitchin if you think we are now, because we wont have a pot to piss in left, the way we are going. We whine about Mexican illegal's coming across our border, while our political rep's bring 1/ 2 million "legal" immigrant's from abroad into this country every year (you wont hear that shit on the news hour) who are taking all the degree job's that young American's spend an arm and a leg on for their degree's here. Then to bring all that religious crap into our country!! say our women need to be fully covered so they dont get a hard- on, etc, etc, etc ... these other sapling American's can kiss up to that shit, but I wont. Some folk's may think I'm racist ... which is cool too ... so be it ... I'll wear the title proudly :) None of them folk's pay my goddamn bill's.

BTW ... above where I talk about 1/ 2 millon "legal" immigrant's coming here a year, I meant "1 to 2" million and the last figure's I seen were closer to 2 ... and many are corporate sponsored, this land also is becoming a dumping ground for the world's misfit's and want- not's. I think we took enough of the tired poor huddled masses, including their religion. Just my opinion Ya'll.