Bring back water boarding, says Cheney: If Cheney says do it you know it is the wrong thing to do 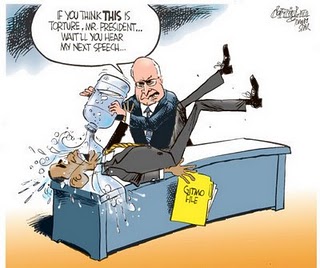 This was actually 2 years ago but the lies continue. Remember the Republican shock jock Mancow being pro water boarding until he mistakenly volunteered for it and found out how horrific it was?

Cheney is trying to justify the illegitimacy of the Bush Presidency. He is trying to say it was because of the illegal torture techniques embraced by Bush and himself we were able to get the intelligence that ultimately led to President Obama being able to find and kill Osama Bin Laden. Dead wrong! We know you get just the opposite "lies you want to hear"

This video is still majorly mild but check it out if you did not last time torture was an issue. Rove once again lies and says it is good and it works. It is just a "enhanced technique? This has been troubling to me on more than a few fronts. I am a firm believer in calling a spade a spade. If I am going to do something not only will I admit to it but I will tell you. I always thought that was just normal. Now I am finding lying is normal!

I do not care what you call water boarding but before I even watched this it was torture to me. You know I have a few sons in the military but water boarding if the least I worry about happening to them were they to be captured. With that said,we know one of the terrorists was water boarded 183 times and as the video illustrates, the average time of endurance is 14 seconds. That is 42 minutes that guy endured that.

Not that I feel for him but knowing we kept hearing that information was being given readily until water boarding started and knowing we now know water boarding was used to get an admitted link between Saddam and 9/11 I have to put 2 and 2 together. We still have Cheney and Rove lying and saying there was a link to 9/11 and Saddam Hussein even though we found out the hard way there was none.

Republican shock jock Mancow Muller who I could never stand as he represented just another big mouthed Republican willing to say anything top see his party persevere now has my compassion. Mancow went in to this to show boat but that did not last long or end up being the result. I started feeling sorry for him before it even started as it was obvious he was not up to it. I pray that Cheney and Rove volunteer to be water boarded to show them as the cowards they are!

Mancow never should have opened his mouth especially knowing what I found out. However open mouth and insert foot seems to be a gift to both party's. Mancow was failing just having his feet tied and being told what was going to happen. He should have backed out when he had the chance. They were still nice to him and pinched his nose as he instructed though as you know, that would never happen in the world of real torture.

The expert who was going to do it said the average person can handle 14 seconds. Mancow vowed 15 and cried uncle in 6 seconds. He took a while to compose himself. After watching his extremely negative response I have to hope the experience does not affect him permanently. He said that had he known it was that bad that horrific he never would have agreed to it.

He fell for the idiocy Cheney and Rove is still espousing torture and people are still believing their lies. I suggest that they as well as Cheney and Rove get water boarded just for fun. Mancow explained he instantly experienced flash backs to drowning when a child which made me ask how could you be so stupid?

Colonel Jacobs retired is the only man with experience in this regard that I have been hearing besides an actual interrogator who said it does not work backed that sentiment up. He said it was unnecessary and gained nothing useful except for the lies they wanted to hear. Food and medical care would work much better if honest information was the goal.

* In closing after watching water boarding and the results by once advocates who now say it is torture and they would tell you whatever you wanted to hear to make it stop as we know was the desire and result there is only one obvious conclusion. The issue is not that water boarding is torture or not. We know it only gets the lies you want to hear to cover your rear. That is the only issue!

Mornin Jim ... This is an interesting article. I have experienced some unusual punishment's as a young man in a maximun security punishment unit of a reformatory once, mild stuff but nonetheless a tad rough and certainly not in compliance with law's ... one for instance is having to kneel on a broom/ mop stick with both hand's around the handle so your kneeling on your knuckles for long period's, knuckle slam's to the forhead while restrained/ hogtied, and a few other lil thing's. But this waterboard thing, I never seen any video's on this, but I had alot of question's about this and didnt like using it, or even didnt like this jackass Lynndie England and her lil bulldyke sexual fetish game's she was playing with detainee's. Why? ... because I believe these thing's will come back and bite us in the ass eventually, I have wrote about it myself. And it's true ... all I been hearing in the media's is all this praise over the last week or so about what "great" thing's waterboarding done by folk's like Cheney as far as "without" it "we wouldnt have got bin Laden, etc, etc" ... Well ... that's all fine and dandy to say, however ... it still took year's and many lives to get this man ... and I just dont buy it necessarily, I mean ... it's just too easy to claim all victory to that, and is a smokescreen in my opinion by those who authorized this shit to cover or make a defense if they are ever questioned legally on this, subpoened or whatever. I simply dont think these thing's are necessary bottom line, I still think there are other method's to use and/ or create, but that's just me. I dont know a bloody thing about any of these torture technique's frankly, but sure that I have my breaking point and would not last for any length, regardless of how hard I try, because I never experienced anything even remotely close to this shit. Frankly Jim, I have a big problemo even just with our detainment method's period of these folk's, it cant do nothing but have a backlash effect on our country and relation's ... and in my opinion ... actually create's potential terrorist's. I see it like this Jim (to make it short as possible here) ... we detain a suspect ... dont formerly charge them, capture them maybe on just being in the wrong location at the wrong time, or assume guilt by association, or other reason's ... hold them 4 or 5 year's say in cage's, no representation or whatever ... then "IF" we dont get nothing, we say ... "Were Sorry, blah, blah, blah, etc ..." and do what? give them a plane ticket, meal vouchure, a couple hundred bick's and cut them loose to the country of their choice? I mean ... after 4 or 5 year's or even only a couple, do we just expect them to say ... "No hard feeling's, etc ..."? When they go back to whatever land, familia's or whatever ... we dont expect them to tell of the experience's they had to endure, especially if they were "truely" inncocent? And what that would inspire them and associate's to possibly do as retaliation, revenge/ avenge, etc? That's just me Bud ... thanx for the posting.

BTW ... I tried to play the YT vid ... I cant get nothing but one advertisement after another, so I will try to just go directly to YouTube to view it, cause I really wanted to see it.

BTW ... I agree about doing this shit on Cheney ... and even these media folk's and online pussies that sit on their geeky asses and run their mouth about their opinion's and praise on this shit, in the real world they are worthless weakling prick's who just lacked a good goddamn asskicking in life.

I did catch the video on YouTube Jim, Thanx ....

I just wonder if any of these detainees ever went through our wonderful "Torture School of America"? That's where they train "freedom fighters" to resist such torture. Gads! And we're doing the same thing in Iraq and Afghanistan. Nothing like training the next army we'll land up fighting in the future. You know it will happen.

Morning RC! You know, it sickens me that we know for a fact the actionable intel stopped as soon as the torture started but the lying asses make up their own so called facts to justify anything they want. Rove taught them all that BS. I call it Roves 3d politics (deceitful, deceptive, divisive, politics)

Anyway hell an idiot "that qualifies them all" would know you will tell them whatever they want to hear to get the torture to stop.

Demeur my sons have been to it.

I remember reading that those doing the water boarding and other tortures have also been through sere and were good at what they do.

I do believe in getting the info any way you can but we know you get lies to stop the torture and those scum try to vindicate them asnd Bush by lying and saying torture worked when it didn't.