Pakistan Taliban warned of revenge for Osama Bin Laden's death, they should be thanking us 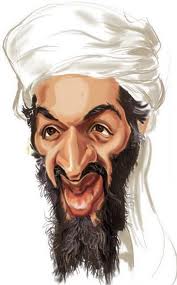 Pakistan Taliban warns of retaliation: Al Jazeera has obtained exclusive footage that appears to show the group vowing revenge for Osama bin Laden's death. This makes absolutely no sense knowing Bin Laden betrayed them but will gain new terrorism converts which is the only goal.True Islam is thanking us!

Knowing this and it will grow around the world as Bin Laden followers continue his vendetta I want to remind you or our discussion with a personal friend of his. Letter written by Noman Benotman, a former commander in the Libyan Islamic Fighting Group who fought beside Osama against Russia! He wrote this 8 months ago but you have to read what a real lover of Islam feels about the betrayal and dishonor Bin Laden has brought to his people and Islam.

The terrorist who said no to Bin Laden:You have lost your way! You are messing around with the DNA of Islam itself. I was impressed when I saw this interview on TV. It is obvious this man was a key high level player before 9/11 and was in on the meeting running up to it. This discussion was about an open letter written by Noman Benotman, a former commander in the Libyan Islamic Fighting Group (LIFG) and a former associate of Osama bin Laden and Ayman al-Zawahiri.

In al Qaeda strategy meetings in Kandahar in 2000, Benotman warned the al-Qaeda leadership of ‘total failure' to realize their aims and called on bin Laden and al-Zawahiri to abandon violence. As you know they did not and he is out for good reason. He was at the high level meeting running up to 9/11, the Davos or terrorism and said no to Osama you will be defeated, this is not about Islam this is not Jihad.

He came out and said no this must stop. We are not winning and I was right. We have betrayed Islam. We are killing the very people and cause we were supposed to be fighting for. Knowing our response to past attacks they thought our response would be 200 missiles or so, so they took the chance. Needless to say they did more damage and killed more people than they thought they would and this is just beginning unless the Islamists quit because we must fight for our lives.

Noman Benotman loves and respects Bin Laden but like Al Zawahiri Al Qaeda number two he does not think Bin Laden was very smart. However, he does not have to be. He got this so called Jihad going and has incited the Islamist rancor he intended. whether he's Dead or alive the battle on. For Islamists this has taken on a life of its own. In reality Bin Laden is the greatest enemy of his people.

Bin Laden is solely responsible for all this war death and destruction. He's no frigging hero to Muslims. They should hunt him down themselves and end this! Noman considered himself a freedom fighter and he was. He fought alongside Bin Laden against the Russians but said these wars have nothing to do with Islam. It is purely political and it is time to lay down arms, 100% and end all this senseless violence.

We know this but Noman says Al Qaeda and now Islamists of all stripes offers meaning to those who have none and gives them a cause but has nothing to do with Islam or Jihad. This all boils down to communications and I agree but Islamists are not interested in communicating. They are interested in our destruction. violence is their communication.

Bin Ladenists stop bring shame on Islam. Stop killing your own people. Stop bring death and destruction on them. Bin Laden forsook Mullah Omar who invited him into Afghanistan to give him protection. Bin Laden used Afghanistan for his own personal war against the west, the US, and Israel. This is not Islam , this is not Jihad. Restore Muslim integrity, end this now! An Open Letter to Osama bin Laden -- by Noman Benotman

* Osama Bin Laden is now dead, he has betrayed Islam and defamed and betrayed Muslims and their religion. His personal vendetta against the west will continue fueled by his death and fought by extremists who have nothing else to do. Fighting the west gives them a purpose. If it is to stop Islam must step up and police itself.

I was hearing either on CNN or ABC this morning that Pakistan has a "new" warning to us ... that is to get all American's out of their country ... they want us out, period. And this shouldnt suprise anyone, I myself have wrote about this over and over in past posting's, because for year's ... every time we occupy and have too much influence in these nation's, spend million's and thousand's of lives, there usually is a counter group that sayz ... "America get out", I mean ... it never fail's dude, then the American flag burning as well as Presidential effigy burning's start and similar, that is what also inspire's me to stay the Hell out of these folk's region's and civil matter's, cause decade's of history show us what happen's. I liked the video above toward's the end, where they took the ammo and laid it out in such an artistic fashion, really looked great! But what's next Guy? ... Yemen is on the edge too, and were asking ourselves for our own to get out of there ... could it be Jim, that we just simply dont belong in these bloody place's, after all? Am I "evil" for thinking segregation, staying out, and leaving folk's alone? ... Jim ... I would bet my bloody paycheck all this is nothing but for the new Asian market's, mining, and trade. I'll shut the Hell up though, Thanx.

jmsjoin said...
This comment has been removed by the author.
9:31 AM

The Gulf of Aden I have long figured to be the next front, that is Yemen and Somalia but you can't forget about Iran either. They plan on dealing with that from the Gulf with our navy. That is why I featured the rail gun and the laser a bit back because those are for Iran.

Anyway I heard Pakistan wants us to reduce manpower but there are thousands of black ops there they don't know about that have been there for years to take the nukes if they think they are in danger. I don't know who heads it now but it was McCrystal.