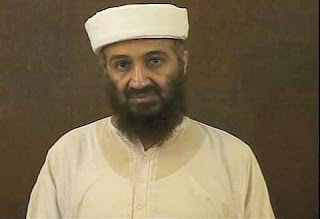 WaPo: Bin Laden Remained Focused on US, Became 'Lazy and Complacent' It was not complacency it was cockiness!

More than 10 years in he was still at the helm running the show in his personal vendetta against the west. He wanted to expand his perverted Jihad against the US and urged all Muslim's and minorities to go after railroad's and small towns. Knowing that some in inter service intelligence agency and in the Pakistan Government were complicit from the get go and our Government knew that Osama Bin Laden had to be killed.

Eulogies and fury: Jihadists eager to avenge bin Laden's death Now is the time to open this wide open before the extremists have a chance to take the lead on this. I would rather be on the offense not the defense.

We have discussed many times since 9/11 how interests in Pakistan's inter service intelligence agency was aiding Osama Bin Laden and even paying Mohamed Atta and crew $100,000 days before the attack on the twin towers. the 9/11 movie "a press for truth", hidden facts about helping Osama Bin Laden

Noman Benotman loves and respects Bin Laden but like Al Zawahiri Al Qaeda number two he did not think Bin Laden was very smart. However, he did not have to be. He got this so called Jihad going and has incited the Islamist rancor he intended. whether he's Dead or alive the battle is on. For Islamists this has taken on a life of its own. In reality Bin Laden is still the greatest enemy of his people. Remember the open letter we discussed from Noman Benotman Bin Laden's personal friend and fellow freedom fighter against the Russian's?

Bin Laden is solely responsible for all this war death and destruction. He's no frigging hero to Muslims. They should have hunted him down themselves and ended this! Noman considered himself a freedom fighter and he was. He fought alongside Bin Laden against the Russians but said these wars have nothing to do with Islam. It is purely political and it is time to lay down arms, 100% and end all this senseless violence.

We know this but Noman says to Al Qaeda and now Islamists of all stripes the vendetta offers meaning to those who have none and gives them a cause but has nothing to do with Islam or Jihad. This all boils down to communications and I agree but Islamists are not interested in communicating. They are interested in our destruction. violence is their communication.

Osama id dead now so the message goes to Osama's followers: Stop bringing shame on Islam. Stop killing your own people. Stop bringing death and destruction on them. Osama forsook Mullah Omar who invited him into Afghanistan to give him protection. Bin Laden used Afghanistan for his own personal war against the west, the US, and Israel. This is not Islam , this is not Jihad. Restore Muslim integrity, end this now!

* Osama Bin Laden is now dead, he has betrayed Islam and defamed and betrayed Muslims and their religion. His personal vendetta against the west will continue fueled by his death and fought by extremists who have nothing else to do. Fighting the west gives them a purpose. If it is to stop Islam must step up and police itself.

Yeah he was still in control, keeping a journal, and absolutely never expecting to get caught and killed in a thought to be safe area surrounded by military and retired ISI and Government officials. I am sure everyone is running for cover now so we better move quick as we did on Anwar al-Awlaki. We have stirred up a hornet's nest of extremists around the world. It is time for us to put it in overdrive and take advantage of the vast wealth of information gathered at Bin Laden's compound.

Good posting on this Jim ... and since in the heading of your blog you say this is a "forum" to be heard, I will take you up on that here.

The part I thought you hit the nail's head, was when you said that some of these folk's have nothing better to do, it give's their life a purpose ... heh, heh, heh, heh, heh :) ... we all should know this, and we all should know that this shit aint gonna stop. For me, I dont give a shit much about any religion ... their all a bunch of crap anywayz to create a herd mentality simply. But many in the west would rather kiss some of these jihadist's asses and fear these thug's, embrace them and maybe they'll love us back or other sapling mentality shit! I believe in dealing violence to those who would do the same to me, even if they are just planning it. I am so glad that they didnt capture bin Laden alive, because as I wrote in some posting's back, I feel having him in custody would be a bigger mess as far as US/ Saudi relation's, jihadist's trying to take hostage's and get bargaining with them, etc, etc ... he's dead, and their job, if they have any integrity and true to what they believe and say is to punish us and avenge his death ... we also have a job to do as well, which is to fight back and NOT bow, not deal, compromise, love, kiss ass, amke excuses, etc, etc holding these inocent's indefinitely is also an expense and waste in these secret prison's or whatever, but when we DO have evidence that one of these in our custody has been involved with a terror event that killed any of our's, we shouldnt waste any further time, and execute them, and in my opinion "televise" it so that they have a hand's on opportunity to see the consequence's ... nor does it have to be torture or inhumane or expensive at all ... line them up and put a bullet in their head, plain and simple. I'm not against them ... it is only what I call the "Casualty of War", I understand bin Laden and even admire him to an extent, so it's not personal, it's war and business ... and in "war" ... death come's with the territory.

Hi RC! Yeah people, even the Government still do not realize what they are up against. Even if we went home from every one of their lands today the damage is done and they will come to get us. Like it or not we just have to continue the fight until the last so called Jihadist in this hard line vendetta is eradicated. Hell you know fighting and dying is a living for them!