Gaddafi's wife and daughter flee to Tunisia, this is big 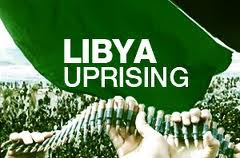 Gaddafi's wife, daughter in Tunisia - source: The wife and daughter of Libyan leader Muammar Gaddafi crossed over the border into Tunisia several days ago, a Tunisian security source told Reuters. Gaddafi's wife Safia and his daughter Aisha came to Tunisia with a Libyan delegation, the source said. Can you blame them?

High profile defections in Libya gaining momentum, it is really looking like Gaddafi's regime is going down. NATO is stepping up pressure on the Libyan government's strongholds with targeted aerial attacks and psychological warfare operations. Wing Commander Mike Bracken said Tuesday NATO has air-dropped leaflets and broadcast messages to troops loyal to Libyan leader Moammar Gadhafi asking them "to return to their barracks and homes".

A Tunisian official told the German Press Agency dpa on Tuesday that Libyan Oil Minister Shukri Ghanem had crossed into Tunisia and was on the island of Djerba. The Tunisian official, who wished not to be named, said he did not know the purpose of Ghanem's stay upon Djerba, an island some 500 kilometers south of the capital Tunis, but that he had crossed into Tunisia late Monday.

The Tunisian state news agency TAP had reported on Monday that a number of Libyan officials were in Djerba in official meetings aimed at resolving the crisis in Libya. A Libyan official in Tripoli denied rumors that Ghanem may have defected and fled the country, telling dpa instead that he was on a diplomatic trip. Yeah a diplomatic trip all right, like all the rest of the military and Government officials jumping ship. I love it!

A network of high profile Libyan defectors, including the former regime stalwart Moussa Koussa, are helping Nato to destroy Muammar Gaddafi's military sites, including bunker complexes from which much of the war has been run, according to senior officials in Libya. Nato planners have stepped up their operations over the capital, Tripoli, and the western mountains in recent days,

I am stupefied that Gaddafi and in this case his envoys insist NATO and the rebels must also stop targeting civilians. They are protecting the citizens that's what much of this is all about. Gaddafi is putting targets on his own supporters back to force NATO and the rebels to kill them to get at him, his weapons, and his murderers. We now have proof.

Gaddafi is also issuing Viagra to his murderers instructing them to rape and impregnate as many women as possible. Several hundred women are so far known to be raped in this way. These people call themselves Muslims? That religion was founded under great principles that most Muslims adhere to. The more I hear about the perversion of Islam to practice murder, rape, and other practices against everyone's laws the more I am sickened that the wider the problem seems to be.

Many see an impasse but I do not as long as we can make life miserable for those that support Gaddafi. Keep pointing out that the coward has built his destruction structure underneath places where they live their daily lives. He points out we are bombing playgrounds, Imam's, and hospitals but the scum is hiding underneath them. The people can end this and now. Take the Gaddafi's out!

Ranch Greeting's Jim! Lot of folk's jumping ship I reckon ... but I also wondered if maybe Ghaddafi may have been the one who told his wife and daughter to leave? I mean ... if I was in the middle of a conflict/ battle like that ... I know I would just naturally first ask my daughter's/ wife/ familia to get the Hell outta Dodge to a safe place while it's going down.

BTW Jim ... I enjoyed going through the photo collection of Salem ... what a historic town! And really beautiful area up your way too. It's been so long since I been to Massachusetts and didnt have the opportunity to visit the sight's of history in Salam, cause I just passed through. Boston itself is (or was back then) a historical masterpiece as far as preservation of landmark's and certain architecture too. Must be beautiful weather also this time of year. I lived for a year actually not far from ya'll in the City of Montreal once.

Later Guy ... hope you get your computer problemo's fixed.

Hi RC, yeah I am sure but it still speaks volumes.

You know, Salem still is beautiful but not like it was in the 60's before all this witch and pirate shit hit it.

I grew up on Gallows hill and as a kid I had a row boat and every day I walked through the historic area (my neighborhood) and rowed out of Pickering wharf around Derby's wharf and fished off Marblehead graveyard and all over. I was a street kid so with the Salem woods too I had quite a ball.

I agree with my brother who wishes he could have seen it in the 1850's before they canaled and blocked the rivers and everything. We have some great old pictures! Glad you looked those, they are pictures from my childhood.

Sound's fun Guy ... I would bet as a kid I would have liked hanging out with Ya'll!

Yeah RC it was one adventure after another. I was just contacted by a childhood friend reminiscing about an adventure we had in an old leaky row boat we found and went fishing in, in Salem harbor when we were 12. Totally forgot about that. Funny but I started a book about my childhood years ago but put it down to follow this daily crap and never got back to it.

i like those adventure @an average patriot.. i hope could write something too..
Texas Land For Sales
.