Gates says we may leave Iraq early Iraq says we can stay US adviser says get out now! Why are we confused? 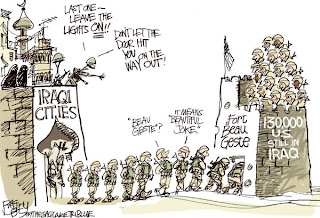 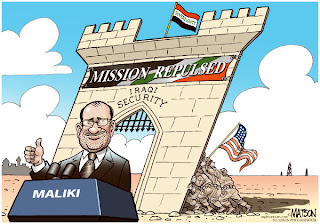 
Iraq says US can stay after 2011! That is change we can believe in? Plus my Custer's last stand scenario is being set up as everyone is being asked to leave Iraq except for us who are now told we can hang around after 2011 if Iraq needs support and they will as they will never resolve the Kurdish issue! Nearly all British troops pulling out of Iraq

I am stunned! Knowing the links I am supplying and that I have been discussing what is going to happen as to the direction we must go and the direction all this is going to go I was blown away when I found a story I did a year ago that applies 100% to what is happening today so I am going to repost a few lines of that before following it with my conclusion.

* You know I firmly believe and have said so a million times by now that since 9/11 everything was construed to allow Bush to gain the power he needed to prosecute his new order not just in the middle east but on the entire world! He diverted from Afghanistan to get back into the middle east with the goal of setting up a larger safety zone for Israel and going after Iran. Both will fail! It has long been my contention that coming to Israel's aid once they attack Iran will be our in to Iran!

Bush has created a hell on earth for Iraq that he calls liberty and success with promises to spread it throughout the entire middle east. He has long wanted a Korea style force in Iraq to secure the peace! That will never work in Iraq or the middle east! Planting our military in the middle of the mess Bush has created out of the middle east because of his failed Democratization program is going to be a Custer's Last Stand on a grand scale! looking at the war cabinet Obama has amassed I am going to say at this point that this is going to happen even under a President Obama.

* Believe it or not that was a year ago! The verdict is still out on Iran and my claims of Bush wanting a Korea style force in Iraq that would result in a Custer's last stand in Iraq is right now in the balance! I am afraid the Colonel's analysis is flawed and is only partly right but his conclusion is totally flawed. I believe he is right it is time to get out. However he is dead wrong saying that Iraqi forces are competent enough to hold off Sunni insurgents, Shiite militias and other internal threats to the Iraqi government.

There is no way! What about the Kurds who want their autonomy and they do not want to share their oil fields period. Nuri Al-Maliki wants that issue resolved and it will never be. Knowing that, Al-Maliki really concerns me saying we can stay after 2011 if the Iraqis require further training and support. Iraq PM admits US troops may stay


There is no way in hell Iraq is going to be able to deal with all that plus the Kurd's fighting for autonomy. That is why Al-maliki's statement that we can stay if the Iraqis require further training and support bothers me. The word support! I don't mind giving them training but I do not want to be left there long enough for the Kurd fight to erupt and we end up doing the fighting for Iraq. Right now the Kurd's like us but like everything else in the middle east that can change on a dime and would. Iraqi premier: Kurdish-Arab dispute must be solved

* In closing I just want to say in one respect the Colonel is right we better get out and now. It is more than time! We never should have diverted our forces from Afghanistan in the first place. Pull out immediately send some forces home to R and R and send all the rest along with the equipment to Afghanistan where they should have been in the first place. It is a given Bush ignored to attack Iraq but it will erupt into sectarian chaos. When it does Republicans will blame it on us. However as I have been saying for years, it is time to see how much Iraq really wants it's Democracy! Gates said troop withdrawal may be sped up well make it now!

We're never leaving at least in our life time Jim. The left is just as bad as the right when it come to being war whores.

All this confusion as 6 Shia mosques were bombed yesterday.

If the U.S. pulls out a sectarian conflict is inevitable, with Iran fanning the flames.

I don't see a pull out, like you, I didn't want the military there in the first place. But, once the military gets a foot in the door, they seem very reluctant to leave. There are still 40,000 military and civilian personnel in Japan, they are there for whatever reason, but they are there and have been since 1945.
No matter what politicians promise or rogue officers say, the military seems to get its way.

It won't matter if we leave. There will be a civil war just like when we left Lebanon. The parties will then resolve their differences and peace will break out.

In listening to Michael Ware the other night it looks like Pakistan Afghanistan and the Taliban are positioning themselves to reach some type of agreement. As with all conflicts you must negotiate at some point no matter what the hawks say.

Hi Tom
You know I agree! Funny but I just got off the phone with a son who is a combat engineer. Right now he is in intense training spending weeks at a time out in the field in the desert. His unit deploys to Iraq in February.
Anyway we just had that conversation among others. I'm a little nervous as he will be in one of those vehicles getting blown up all the time like today as they look for IED's.

Hi Holte
Civil war was a given from day one. I hate to say it but this too has yet to begin unless we just get the hell out.

Hi Demeur
That is great about Pakistan and Afghanistan. We will see how that goes. Iraq is a guaranteed civil war that will eventually engulf the entire middle east and Bush chose to ignore that so he could get back in the middle east to create the new disorder Gog told him too!