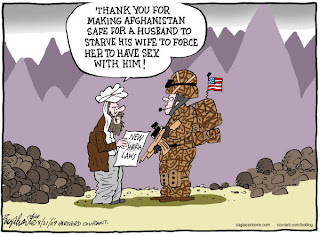 Bush's 3D politics has spread around the world! Latest example Afghanistan! Afghanistan's flawed election, sounds like another American success! Seeing that the inept life long long loser was a total liar I was stunned that someone voted him in. He was voted to follow someone else's agenda. That turned out to be Rove and Cheney. Their controlling lying fear mongering led me to coin a phrase I now see the norm in our politics and every country around the world.

To me Rove Cheney and little Bush were the real axis of evil and were using their 3D politics to achieve their goals. (3D politics = Deceitful, deceptive, divisive politics) It seems in every election in every country we hear cries of fraud not just here in the US and more visibly in Iran during the June Presidential election. Why should we expect Afghanistan to be any different? Do what you have to and lie, I hate it! Anyway They too have learned from the example Bush set. Reporter's diary: Afghan elections

I have to tell you, I wrote a story about Afghanistan's election and that it must be legitimized the other day because it is important to the entire world and it was the first story I ever wrote that was not widely received. What is the Malaise? I want my sons and all our troops out. Anyway I am stunned! pre Bush and his underhanded crap to get elected and reelected I must admit I never heard of wide spread election problems and outright fraud and cries of vote rigging.

Voter gripes abound as Afghans count presidential ballots Charges and counter charges are growing and coming from both leaders!

Bush pundits I reiterate often set the deceitful deceptive standard in what I called their 3D Politics. The world has taken note and their 3D Politics (deceptive, deceitful, divisive, Politics) has become the norm in America and now around the world. I am sick of hearing our Democracy is still developing as an excuse in election fraud. Our Democracy is still righting itself but it is the Republican goal to get it back to Bush's controlling low life standard.

You want to decry other Nations not just Afghanistan's election but their Politicians have learned their lesson well!Meanwhile I am listening right now to Admiral Mullins say the situation in Afghanistan is deteriorating and we must have successful elections so whoever the leader is can take control of the deteriorating country. I know Abdullah Abdullah is thought by ex Muhajadeen fighters to be able to control the Taliban and bring the nation together so my hope is with him. Afghan conflict serious, 'deteriorating'-Mullen

I was listening to Admiral Mike Mullen, chairman of the U.S. Joint Chiefs of Staff say more troops may be asked for. 15,000 to 45,000 more on top of those just added because the situation is serious and deteriorating. The challenges of Afghanistan are extraordinary. Bush screwed around in Iraq and created another Vietnam for Obama. I have long dreaded seeing another Saigon rout. We should get out NOW while the getting out is good and monitor how much want their so called Democracy!

I think it was Bill Mahr who just said that America has done a great job in Afghanistan. We've brought them out of the twelveth century all the way to the year 2000.

Bill Maher certainly has a knack for coining a phrase, it sure does sum it up.

The people who did vote deserve some credit, how many folks would vote here if they were threatened with losing a digit.

The accusations of fraud and the stuffing of ballot boxes, and In Iraq, suicide bombers bribing their way through checkpoints to get to their target. Democracy is just a word to these people, nothing more.

Hi Demeur
Yeah we're doing a great job. We are letting them kill us instead of each other. I am posting on that tomorrow. If you come by look at the picture of Hakimullah Mehsud in the link. These people are happy as hell and smile while killing. Unbelievable!

Hi Holte!
Maher does have a way with words. If you want to hear the truth go to a comedian. Right now retribution is being taken by the Taliban on those that voted. What a friggen mess we are in!

Mike Mullen is as delusional as they come. The Soviets had over 100,000 troops in Afghanistan, and still had their *sses handed to them on a platter.

Even with our technologically superior weaponry, we have had disasters like Takur Ghar. Many of our casualties, like in Takur Ghar, were special forces; Rangers, SEALS, etc. These are not grunts fresh out of boot camp.

The Pashtuns, and the other tribes, are some hardy people, and very capable fighters. They have lived in constant war for 30 years, and have a history of fighting that goes back for thousands of years. As tough as we might think we are, we don't have a snowball's chance over there. You have to be an idiot to wage war in someone else's backyard, especially when the backyard has the geography of Afghanistan. The Soviets lasted a little over 9 years before it damned-near bankrupted them. We are fast-approaching that time-frame.

Our arrogance is mind-boggling! Are we actually willing to self-destruct rather than admit we f*cked up? We need to get out, and get out NOW, every single last man. Troops, Advisors, Logistics, et al.

Any supposed victory will only be temporary. Read the history. The only one who actually conquered them was Genghis Khan (arguably the most ferocious warrior to have ever lived) leading the Mongols; and they couldn't maintain the victory and were soon evicted.

Brother Tim got some good points re history... and it is very nice to see that all of you have such good intentions! - Says a lot of good things about you as people.

I just would like to point out that there is a difference in warfare and tactics from country to country, in spite of them being allies.
The way that the Americans are trained... well, I guess you are right James, getting them out of there is probably the most promising option. But as far as other allies are concerned, f.ex. the Brits and the Danes... we're not really doing such a bad job there to tell you the truth.

The problem is attitude. The Americans have a very agressive attitude - not only towards the enemy, but also towards those who they are supposed to help (the Afghan people). That doesn't work very well at all.

We need COs who are able and willing to negociate rather than ordering an assault. And the average US soldier can not go down there with the "attitude: "I'm gonna be alright, because I'm the meanest motherfucker around!" - Live just doesn't work that way - and neither does war!

Son of a gun Brother you nailed that. They are as happy as pigs in shit to have us there to kill. I know I had to give you the Taliban get their wish before. This is right where they want us.They love war that is what they live and die for.

Hi Sarah
You got that right! We are not the biggest and baddest not by a long shot. If things were so lily white you could say you must fight on our terms maybe we could win but these are their terms and Brother is right. I know Genghis Khan is credited to be the only one to defeat them but he didn't re4ally as BT points out. I felt bad for the Russian's now I feel bad for us and I refuse to believe that scum Bush put us in this position and for oil.

Hi Jim,
The war is not going in favour of "the West", trillion dollar technology and weapons seem not to be a suitable match for the cunning tenacity of the Afghan and other "warriors".
Hope your lads get home safe, their lives are worth far more than the reputation of some selfish general or deluded politician....
Here in Britain, public support for military campaigns is dropping.
In a few weeks, the parliament will have to vote on a "motion", put forward by the Welsh Nationalists, which is to "Withdraw immediately".
The vote will go against them, but there will be debate and at least the pro-war bloc in the British parliament will know that they will not continue unchallenged.
Currently, with US anger focusing on Scotland over the Libyan deals, it could be that some of the Scottish politicians will side with the Welsh, purely to retaliate against American criticism.

No it is not going good but like it or not this has barely started. Whoever pulls out will be good for the Taliban and make them emboldened but I think if they have any designs on the homeland that will get them acting on it

Jim--
If when you say, 'homeland', you are refering to the U.S., fuggedaboudit. The Taliban only have designs on THEIR 'homeland'. Water seeks it's own level. Sooner or later we will be purged, just as all who have come before us. It would be in the best interests of all involved for us to leave sooner, rather than later; unless you're of the mindset that we should be like the phoenix and rise from our own ashes. Ask Russia.

One more thing. Why are the United States the only ones in the world who are entitled to be 'emboldenes'?????

That should have read 'emboldened'.