A milestone in Iraq not discussed as Zero Americans killed in December but we’re off to the Gulf of Aden so? 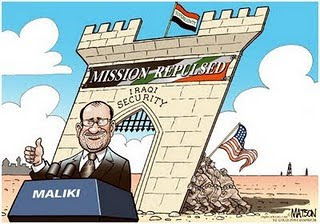 I have to reiterate something I have said too many times since Bush chose to ignore all warnings of total civil war spreading throughout the entire Middle East so he could attack Iraq and straighten out the Middle East as God spoke to him and instructed him to. You know I firmly believe and have said so a million times by now that since 9/11 everything was construed to allow Bush to gain the power he needed to prosecute his new order not just in the Middle East but on the entire world! He diverted from Afghanistan to get back into the Middle East with the goal of setting up a larger safety zone for Israel and going after Iran.

Bush has created a hell on earth for Iraq that he calls liberty and success with promises to spread it throughout the entire Middle East. He has long wanted a Korea style force in Iraq to secure the peace! We were concerned because we knew that would never work in Iraq or the Middle East! Planting our military in the middle of the mess Bush has created out of the Middle East because of his failed Democratization program would be a Custer's Last Stand on a grand scale!

I still; see a total civil war Sunni against Shiite erupting in the Middle East because Bush freed up Iran to instigate it on their end and they are. I still am concerned we will have a permanent presence in the Middle East but feel we will have to largely leave Iraq to her own demise. We will still be there but it looks like Yemen, and the Gulf of Aden will be the prime focus unless Iran gets something going between the US and Iran.

I am psyched as I see the civil war Bush created in Iraq progressing and without killing and involving American troops. We have a milestone in Iraq I feared I would never see. December is the first month free of American deaths since this began in March 2003. 2009 was also the lowest year for casualties since this started. No US combat deaths in Iraq in December‎ -