Republicans Screwed Up After Reagan, Steele: Republicans can learn from Reagan. Yeah what not to do! 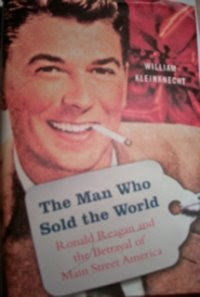 Reagan is the father of this mess we are living today and Republicans want to further. You have to read this about Ronald Reagan the Destroyer of Main Street! I have been saying it for years and am finally happy to see someone of repute who is not calling him an American hero. He is the Father of this nightmare we are living and it is just beginning. You better be very concerned they want to return to the ways of Ronald Reagan.

They call themselves the party of Ronald Reagan! That scares the hell out of me because Reagan was the Father of the war mongering high Deficit compassionate Conservatives that gave Birth to much war present and future unless Obama can turn around the disaster they created around the world with their war mongering!

If only because I feel compelled to keep reminding the country of it Reagan also was the leader of the over spending "small Government" "fiscally Conservative" trio Reagan, Daddy Bush, and Bushie, who rang up 74% of our Nations debt choking our children's future while once again they want to blame Democrats for and Obama for worsening as he must in order to try and rescue us from the mess they have created and passionately want to continue!

Allow me a little Debt and Republican "success" history!

It was President Reagan's "success" in keeping us "safe" that made it necessary for us to start the "Debt Clock" as due to Reagan's success our debt was climbing so fast a clock keeping track of its rapidly changing total was a necessity! Due to Bush's "success" last year the Debt clock had to be refitted as it could only handle a $9 trillion figure. it was refitted to handle $10 trillion plus. It is now moving so rapidly it makes your head spin. This article is awesome. Actually it is a book and it backs up 100% everything I keep repeating over the years. The book is a scathing, and well deserved, indictment of that "empty suit" Ronald Reagan, and his ultra-grasping political creed, "Reaganism," which directly led to the "Financial Meltdown of 2008. Reagan was nightmare leader and The President who destroyed main Street America

Republicans call themselves the party of Ronald Reagan and they want a return to Reaganism! That scares the hell out of me because Reagan was the Father of the war mongering high Deficit compassionate Conservatives that gave Birth to much war present and future unless Obama can turn around the disaster they created around the world with their war mongering!

* In closing! Steele stupidly thinks Republicans and thus the country should stick to the values that were employed under Cheney, Bush, and Reagan the Father of all our problems. The Reaganism that got us into 2 world wars,a recession,and the worst jobless rate in 25 years with the long term unemployment rate at 27% the highest since 1948. Progress you can be proud of, that guy is an idiot! We should hope that Republicans do return to the fundamental philosophies of Reaganism that started this big spending war mongering mess. GOP Chief: Republicans 'Screwed Up' After Reagan
Steele: Republicans can learn from Reagan

Reagan was just a puppet just like W., neither were intellectually capable of being president and surrounded themselves with people who pointed and prodded them in directions that suited the puppet masters, tax cuts for the wealthy, deregulation of the Savings and Loan industry, WMDs, Shining City On The Hill delusions the manipulation of language to make the word "Liberal" a foul word compatible with "Nazi, Stalin, Communist." Sickening.

I agree! Look at this crap. This is what I got on the media site I write on: Righter RR is the reason the Debt clock was started as it was climbing so rapidly there had to be a way to show it. I have written about it and the war mongering a few times but you can google it! The meltdown was due to Bushie following Reaganism on steroids!
Reply Flag
Posted By Righter Righter | about 7 hours ago
Because like you google has NO agenda...
Right????
That is a joke. Or, at least I hope you meant to be funny because nothing,absolutely nothing could be further from the truth.

Safety through strength is a hell of a lot better way to be using my tax dollars than Liberals want, which is to support those who come here illegally, those too lazy to work, "social" and/or "green" projects that should be done with philanthropic dollars.

You may have written about it but, until you set aside your liberal democrat socialist agenda and read the lending laws you will never, ever understand it enough to write about it accurately.
Reply Delete
Posted By jmsjoin James Joiner | about 4 hours ago
I wish it was a joke but sadly for us it is fact!
Reply Flag
Reply By Righter Righter | about 1 hour ago
I'd bury my head in that belief and not bother to find the truth either if I was you.
Luckily, I am NOT you and therefore, I know and tell the truth rather than revisionist history!

The use a Ronald Reagan quote:

If you can't beat 'em, beat with their hero's words.

I was just listening to Perrino and Giulliani both on 2 different occasions say there has never been an attack on Bush's watch but there was on Obama's.

Giulliania's aides came right out and said he was mistaken but nothing from Perrino. I am so sick of those asses trying to rewrite history.

Karen I get so sick of hearing the destroyer of America touted as a hero and our Savior!

I love this post! I am so sick of the rights worshipping of Reagan and how he was the GREATEST president, They wish he could rise from the dead and save us! ROFLMAO!!! They really are a bunch of morons...

Hi Sue
Welcome and thanks! Happy to hear I have company. I am so sick of hearing him worshiped as our God. They are much worse than a bunch of morons they are imbeciles with a voice!