The Taliban are terrorizing Kabul and the Palace not because they are "desperate" they are excited! 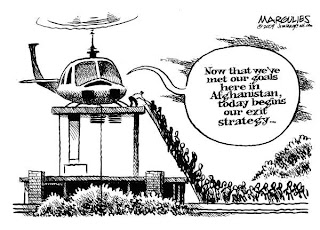 Afghanistan rocked by Taliban attacks on govt buildings in Kabul

I wish Holbrooke and the rest of them would smarten up and realize what they are dealing with and act accordingly. They have to stop the stupid rhetoric that they are being hurt and are desperate. They are not desperate they have us right where they want us. They were not our enemy Al Qaeda was. They are our enemy now but the Taliban is indigenous. They are in their country we are the infidels the invaders the enemy.

They are in their glory! I wish Holbrooke and the rest of our so called leaders would read The Taliban get their first wish and realize what we have done to ourselves. We have due to our arrogance and ignorance I would have to assume walked or should I say flew right into their trap.

Many Muslims believe that ancient Khorasan which covers parts of modern-day Afghanistan, Pakistan, Tajikistan, Iran, Uzbekistan and Turkmenistan is the promised land from where they will secure the first victory in the end-of-time battle in which the final round, according to their beliefs, will be fought in Palestine-Lebanon-Syria. They are not desperate they are giddy this is finally under way!

Holbrooke has 45 years of service and is supposed to be a fierce negotiator and gifted Diplomat. He is in a highly visible critical position. I wish he would display a little bit of good sense. He is using the same childish ignorant irresponsible destructive rhetoric he used under Bush. We may need experience but we need someone who can think evaluate and change with the game. Adapt overcome and move forward not backward!


US Envoy Says Taliban Attack on Kabul 'Not Surprising'


I just heard Holbrooke say the Taliban who did these attacks on Kabul and in the Palace will be killed and they will not succeed. The idiot! They want to be killed “serving Allah” They want to be martyred. They fight and die for a living. We gave them a cause. They have succeeded! Sadly we insist in staying on their soil and giving them more success. We will never learn!

Sorry, you haven't heard from him yet. Do you have any comm with any of his comrades?
But I guess, he's alright, because bad news do travel fast, so you would have heard...

I'm still quite stressed. But have realized i have to do one thing after another, can't do everything at the same time. but there is just sooo much to be done... anyway, we're still making progress, perhaps even better (well, not really more, but just quality-wise better)progress than before...

but frustrating everything takes so long and today my husband came with even more bad news on corruption in the educational sector, which really pissed me off...

how are things with you? all snowed in?

Jim, I have personally hated the Taliban since they destroyed the ancient giant Buddhas. However, I've decided to leave war and peace to the rest of the bloggers - I'll still post about it every now and then, but for the most part, I'm sticking with environmental issues. The way I see it, even if we had peace on Earth, universal health care, etc. what good will it do us if the planet dies?

It has been snowing all day here and we had a foot the other day. Bill just called from work and told me to leave the shovel out so he can shovel after work tonight. Good kid he is!

I heard from Tom once but not since! December was the first month with no casualties in Iraq so I hope for the best.

We are having special elections today to fill Senator Kennedy's seat here in Massachusetts. They think a Republican is going to take it. That will ruin Kennedy's legacy and end Health care and Obama's whole agenda. It is always something, oh well!

Hi Robert! I know, that blew my mind. They are going to rebuild them but that is not the same!

We're screwed and for anybody to think that there will be any major positive common sense progressive change is living a delusion.

I know! I keep hoping but I don't think so. She was lousy for this! She went on vacation and took it for granted. I don't even like looking at her face but I voted for her. A friend was getting E's from out of State telling them to vote for Brown to defeat Obmaa's agenda. We are screwed!