Daily Examples by the Vicks and Craig's of America show a Nation in Decline, Our well taught children may be Societies Saviors! 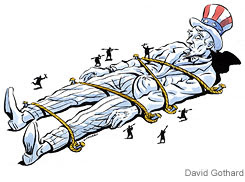 The Rise and Fall of the American Empire? It's up to all of us!
Knowing that in the past I have written numerous times on the increasing decadence of our society and that we were heading the way of the Roman Empire and every society as a normal point in a societies cycle of life. Bush has merely sped up our demise in hi efforts for new societal and world order. We receive daily reminders from all levels of our society. The growing daily ration of rapes and murders but supposedly "normal" good citizens is highlighted by the sorry examples we have to follow in our Government and those many in this society revere and hold special as our sports figures.
I was thinking this morning of the special people I have met of late on line and the fact that I raised my own four sons to be leading citizens and to lead by example. You lead by example! A good leader is gracious to those at their command and you command respect you do not demand it as we see daily examples of. The latest sorry examples of our so called leaders are Michael Vick from the sport world and Sen. Larry Craig from the Political world.
I am sure every one of you can come up with multitudes of examples of our degrading standards and examples. I have said this many times and wanted to share this report I found this morning that backs up 100%everything I have been saying and what most of us know from personal experience. I heard some research information shared by a speaker a while back that shocked me. I don’t shock easily, but this data really caught my attention, just like an alarm bell clanging in my ear. The message was clear, and the call to action urgent.

The research was historical in nature, reviewing the decline of multiple civilizations and empires throughout recorded history. This research showed conclusively that there is a definite pattern to the rise and fall of every great nation, empire, and civilization. The author asserts that the very same patterns appear in every single case, without fail or significant variance -- and one key factor in every civilization is the role played by men in their families.
At the "front end" of a rising civilization, men are firmly, decisively in control, sometimes to the point of true, harsh, "male dominance." With the rise of that civilization, the male changes from strict authoritarian to a kinder, more noble man. It is in this phase of civilization that society comes to full flower, experiencing great prosperity, stability, and growth. In the third stage, the male begins to disengage from his family, losing his nobility, and abandoning his role of leadership.
Females in society are therefore forced to abandon their instinctive maternal roles and step forward to assume the leadership roles that men have relinquished. It is in this stage that society begins a rapid decline, eventually resulting in its demise. According to this research, eight specific patterns of domestic behavior have signaled the downward spiral and imminent demise of every culture:
http://www.case-studies.com/articles/decline.htm

Shocking, isn’t it? It’s just like reading today’s newspaper. If this research data is taken seriously, one can only conclude that America is a civilization in rapid decline -- a nation in serious, imminent danger. The author was noted Sociologist and Historian Dr. Carle Zimmerman. His book, "Family and Civilization," is a scholarly work, pure history, sociology, and science. Far from being current rhetoric from the "religious right," the book was published in 1947. We can turn this around and if it is to be turned around it will come from children that were raised to lead by good example and to "command respect" not demand it because of societal position!

I'm not really sure about your thoughts on this, however it is true that the fish rots from the head.

When those in power work only for the powerful instead of all its citizens than there will be a breakup amongst society.

That is really the start of decline of a civilization as I guess I would see it.

When the citizens can no longer see that all the people are represented by their government than they seek their own ways to survive and that is what were seeing now.

A criminal government breeds a criminal society and in the end it destroys the whole country or Nation as in our case.

fish rots from the head? but the stink spreads far and wide....I have hope that change can come- but it has to come Soooon...and it must be great change...no more of this small balled lillylivered dems ....we need MORE courage and bravery shown...

anon
What you say is true and is a smal part of what you see today. On kos this was turned into a hate for gays and people who do what they want. I am a to each his or her kind of guy so could care less what anyone does until they involve me. Youre private life is just that until you go public and thrust it on the rest of society.

All right enigma! I agree with yoou. We do need it now and quickly but I do not see it.
To me there is one person capable of putting America and the world back together after the mess of Bush and he is as of yet not running and that is Gore!

Just like the stench of a skunk leave lasting effects, thus the stench of evil has spread over our nation, and it is a stench that will never go away.

Total dominance is around the corner.

Larry you know I am afraid you are right! I am working on something I wanted to talk about from yesterday in this regard.
I just found out something stunning especially since you and I talk about it all the time. Iknew Bush was going to attack Iran this fall and it is coming quickly despite what the naysayers say. Preparations are made, attack is imminent! Anyway with so much happening I will sit on it till tomorrow.

Check out this article, it goes along the lines of what you spoke.

Thanks Larry
You know, I always get some sort of confirmation here amongst those that see reality and only care about seeing the right thing and the truth. At kos I very often get some biased screwd up personal agenda guff as was the case with this. Thanks for the link it is my pleasure to check it out.

Damn Larry That topic you linked me to is exactly what I was talking about. That and a couple other things that just happened should tell even the most jaded that the attack will happen soon and no one will be able to stop it. More BS shock and awe on a far larger scale. Boy are we screwed!