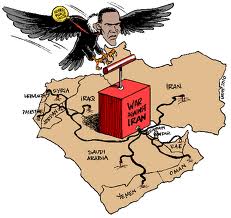 Weapons Sales to middle east allies Move Ahead Despite US Worries

Weapons Sales to Iraq Move Ahead Despite US Worries: The Obama administration is moving ahead with the sale of nearly $11 billion worth of arms and training for the Iraqi military despite concerns that Prime Minister Nuri Kamal al-Maliki is seeking to consolidate authority, create a one-party Shiite-dominated state and abandon the American-backed power-sharing government.

The military aid, including advanced fighter jets and battle tanks, is meant to help the Iraqi government protect its borders and rebuild a military that before the 1991 Persian Gulf war was one of the largest in the world; it was disbanded in 2003 after the United States invasion. What about what we did with our illegal attack? What about adding fuel to the fire of civil war we ignited with our illegal war?

US Seals $3.48B Missiles, Technology Sale To UAE: The U.S. and U.A.E. have a strong defense relationship and are both interested in “a secure and stable” Persian Gulf region.The deal includes 96 missiles, along with supporting technology and training support that Little says will bolster the nation’s missile defense capacity.The deal includes a contract with Lockheed Martin to produce the highly sophisticated Terminal High Altitude Area Defense, or THAAD, weapon system for the U.A.E.

US to sell F-15s to Saudi Arabia: The Obama administration is poised to announce the sale of nearly US$30 billion worth of F-15 fighter jets to Saudi Arabia, U.S. officials said. The deal will send 84 new fighter jets and upgrades for 70 more, for a total of US$29.4 billion, according to the officials Wednesday, who requested anonymity because the sale has not been made public.The agreement boosts the military strength of Saudi Arabia, a key U.S. ally in the Middle East, at a time when the Obama administration is looking to counter Iranian threats in the region.

Underscoring that effort was a fresh threat this week from Tehran, which warned that it could disrupt traffic through the Strait of Hormuz, a vital Persian Gulf oil transport route, if Washington levies new sanctions targeting Iran's crude oil exports. About a year ago, the administration got the go-ahead from Congress for a 10-year, US$60 billion arms deal with Saudi Arabia that included F-15s, helicopters and a broad array of missiles, bombs and delivery systems, as well as radar warning systems and night-vision goggles. Don't forget the billions in advanced weaponry given to Israel as a "counter balance" Also the 70 Billion in advanced arms give to our so called middle east allies to defend against Iran.

A Moderate Official at Risk in a Fracturing Iraq: RAFE AL-ESSAWI is the man in charge of Iraq’s finances, a moderate Sunni doctor who greets his guests and denounces his foes in practiced English. He may also be the next leader to fall as the country’s Shiite prime minister takes aim at perceived rivals and enemies, his fate a litmus test for a country in crisis.

10 Years ago we noted: U.S. promises of military aid or arms sales to strengthen its Middle Eastern allies against Iran and other regional foes seem aimed at repairing a balance of power destroyed by the U.S.-led invasion of Iraq. That is not what is going to happen or what this is about.

Supposedly Toppling Saddam Hussein ended Iraq's role as a counterweight to Iran, a part it had played since the 1980s in a Gulf security system that Washington had hoped would contain the rival powers. That was only the smallest of the repercussions. Toppling Saddam gave Bush the excuse to get into the middle east, upset the balance of the entire middle east as Bush knew would be the case, and set the stage for Bush's new middle east order that has long been planned and he will not stop now.

This is still just beginning but it will increase rapidly with Iran's threat to close the Gulf and us arming our Allies to help fight them. I had some interesting conversations in relation to this story. That made me remember how long this has all been planned, and put the rest of this developing scenario together. After 50 years of middle east policy and not arming them to fight wars Bush has changed that in hopes of getting them to fight Iran and Syria.
Bush now Obama will be freed to attack Pakistan and Iran from the Gulf as Iraq quiets and others fight Iran on the ground, or so they think!

We must make a Difference! We think we will now be free to go after Pakistan and Iran from the Gulf with our carrier and battle Groups while others will be able to defend themselves and will be doing the brunt of the fighting and ground combat. Everything is almost prepared. It gets much worse

Remember the Saudi Iranian Neo cold war It is soon to be out in the open and go virile!

Remember the Saudi's opened their air so Israel could attack Iran

I have to reiterate something I have said too many times since Bush chose to ignore all warnings of total civil war spreading throughout the entire Middle East so he could attack Iraq and straighten out the Middle East as God spoke to him and instructed him to. You know I firmly believe and have said so a million times by now that since 9/11 everything was construed to allow Bush to gain the power he needed to prosecute his new order not just in the Middle East but on the entire world! He diverted from Afghanistan to get back into the Middle East with the goal of setting up a larger safety zone for Israel and going after Iran.

Bush has created a hell on earth for Iraq that he calls liberty and success with promises to spread it throughout the entire Middle East. He has long wanted a Korea style force in Iraq to secure the peace! We were concerned because we knew that would never work in Iraq or the Middle East! Planting our military in the middle of the mess Bush has created out of the Middle East because of his failed Democratization program would be a Custer's Last Stand on a grand scale!

I still see a total civil war Sunni against Shiite erupting in the Middle East because Bush freed up Iran to instigate it on their end and they are. I still am concerned we will have a permanent presence in the Middle East but feel we will have to largely leave Iraq to her own demise. We will still be there but it looks like Yemen, and the Gulf of Aden will be the prime focus unless Iran gets something going between the US and Iran.

As you know, I talk about it often as I watch Bush's new Middle East (dis)order progress. He ignored Afghanistan so he could use the patriot acts powers to divert from Afghanistan to attack Iraq using the excuse of unseating Saddam so he could get in the Middle East to help Israel establish a buffer zone and establish a new middle east (dis) order or so Israel and Cheney thought. Bush at Cheney's urging made an abrupt shift in policy towards Syria, a shift that has now brought the entire Mideast region to the brink of war and chaos. Much worse than the hell on earth they created for Iraq. Did you ever read A clean Break, Cheney's well documented destructive plans for the middle east

That plan was put together in 1996 for Israel. They were just waiting for an idiot to come along so they could implement their plan for the Middle East. Along came the life long follower and life long alcoholic loser Georgie Bush. I wish I could say the rest is History but this is still barely beginning and just beginning to take shape. All Bush did by ignoring Afghanistan and attacking Iraq was to guarantee a loss of everything and a complete Middle East and Asian Breakdown.

He freed Iran up to pursue her version of new middle East order by interfering wherever she could while Bush was doing the same thing with his Middle East Democratization program. I think you can see how successful Bush and Cheney were with chaos creating Middle East Democracy program but you are barely seeing the results they created in Iran.

The goal absolutely is to be the country who decides which direction the new Middle East (dis)order will take. Bush started it by attacking Iraq to get into the middle east to destabilize it and start the new middle east order the idiot said God told him to do now it will be up to Iran and Saudi Arabia at least up front fight it out whether this goes the Iranian Shiite way or the Saudi Arabian Sunni way and do not forget Israel!

You know I firmly believe and have said so a million times by now that since 9/11 everything was construed to allow Bush to gain the power he needed to prosecute his new order not just in the Middle East but on the entire world! He diverted from Afghanistan to get back into the Middle East with the goal of setting up a larger safety zone for Israel and going after Iran. Both will fail! It has long been my contention that coming to Israel's aid once they attack Iran will be our in to Iran!

Watch out Iran! Watch out world!