The History of veterans Day 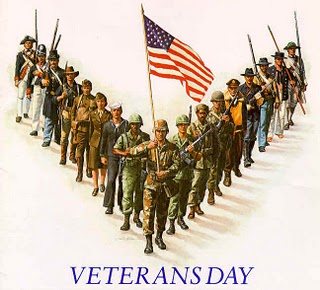 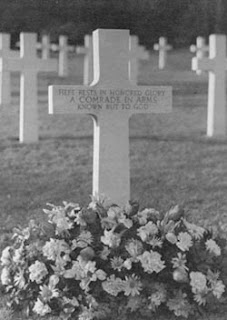 World War I, then normally referred to simply as The Great War (no one could imagine any war being greater!), ended with the implementation of an armistice [temporary cessation of hostilities-in this case until the final peace treaty, the infamous Treaty of Versailles, was signed in 1919] between the Allies and Germany at the eleventh hour of the eleventh day of November, 1918.

November 11: President Wilson proclaims the first Armistice Day with the following words: "To us in America, the reflections of armistice Day will be filled with solemn pride in the heroism of those who died in the country's service and with gratitude for the victory, both because of the thing from which it has freed us and because of the opportunity it has given America to show her sympathy with peace and justice in the councils of the nations." The original concept for the celebration was for the suspension of business for a two minute period beginning at 11 A.M., with the day also marked by parades and public mettings.

On the second anniversary of the armistice, France and the United Kingdom hold ceremonies honoring their unknown dead from the war. In America, at the suggestion of church groups, President Wilson names the Sunday nearest Armistice Day Sunday, on which should be held services in the interest of international peace.

Congress passes legislation approving the establishment of a Tomb of the Unknown Soldier in Arlington National Cemetery. November 11 is chosen for the date of the ceremony. According on October 20, Congress declares November 11, 1921 a legal Federal holiday to honor all those who participated in the war. The ceremony was conducted with great success.

Congress passes legislation on May 13 making November 11 a legal Federal holiday, Armistice Day. The United States has no 'actual' national holidays because the states retain the right to designate their own holidays. The Federal government can in fact only designate holidays for Federal employees and for the District of Columbia. But in practice the states almost always follow the Federal lead in designation of holidays.

World War II and the Korean War create millions of additional war veterans in addition to those of the First World War already honored by Armistice Day.

On June 1, President Eisenhower signs legislation changing the name of the legal holiday from Armistice Day to Veteran's Day.

Congress passes the Monday Holiday Law which established the fourth Monday in October as the new date for the observance of Veteran's Day. The law is to take effect in 1971.

Legislation passed to return the Federal observance of Veteran's Day to November 11, based on popular support throughout the nation. Since the change to the fourth Monday in October, 46 states had either continued to commemorate November 11 or had reverted back to the original date based on popular sentiment. The law was to take effect in 1978.

The History of veterans Day

Labels: the history of veterans day

Funny how Memorial Day and Veterans Day are both remembered the same way, honoring the war dead. Nobody seems to think of the 25% homeless who are vets. And there's the ones who lost their limbs and more sadly their minds "over there".

I prefer to honor the living vets, honor those still serving, and oppose these wars.

I work directly with homeless vets twice a week at a local shelter. Very sad.

In my heart on Veterans Day and Memorial Day, I also honor the conscientious objectors and civil disobedients for peace.

Demeur you know you're right! You saw my comment to Tom on your site, I am sure many have like experiences. It is sad especially knowing this is just the beginning. Jim and his brothers know.

Right on Tom and for some of us it is an every day event.

Billie I am proud of you and proud to know you. You just take care of yourself as I think you are on your way back to the border soon if not already there.