Russian US satellite collision accident or not is a good thing! 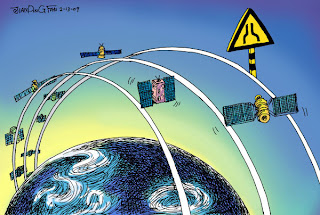 US and Russian satellites collide above Siberia Remember this?


US warns of space "dodge ball" after satellite crash

Concern of a space war Russia, China, and the US say they do not want but are all prepared for has long been a concern of mine for a long time for a few reasons. Have you ever heard of Assassins Mace

China's satellites shadowing ours, Why

How about HAARP Well research for over 100 years at a cost of many millions! A New York Times story, dated December 8, 1915, describes one of Tesla's more well-known patents, a transmitter that would "project electrical energy in any amount to any distance and apply it for innumerable purposes, both in war and peace."

We know how critical controlling Satellites is to us and our military along with those of our friends and adversaries. that disruption really made me think of how fragile our ability to communicate is. I have said many times that whoever controls space controls the future. Without satellites the worlds militaries are dead in the water, sitting ducks waiting to be picked off!

I am not saying I am concerned that these two satellites colliding was anything more than an "accident" I will wait and see what if anything leaks out but it makes me curious to know this happened above Siberia? A Russian and US satellite? What are the chances of 2 satellites colliding and destroying each other? This was a first but... I used to be concerned about the possibility of a space war because whoever owns space owns the battlefield thus the future,

Today's militaries are totally controlled by satellites. No satellites no air Force nukes, nothing. Aircraft carriers and entire navy's would be dead in the water. As I said I have long been concerned of a space war for that reason and because of the resultant millions of pieces of space debris! We would no longer be able to use space, we would be trapped on earth

This collision accidental or not gives me hope. If one collision causes concern as to dodging space junk I have to believe we will more than make every effort to refrain from trapping us on earth.

I read it in the times. An amazing thing to happen isn't it and indeed the place where it happened. Accidental or not, it left an enormous amount of debris in space. And that's not good.

Hi Monique
The space debris is what concerned me because too much and we are trapped here on earth!

Knowing we have been gearing up to go after each others satellites to shut down entire militaries and that we shadow them I am not convinced this was just a coincidence.

I am happy to see that it was first denied but now even Russia sees the tremendous dangers posed from just one collision never mind hundreds! So as a result accident or not I think the collision was a good thing!

Our debris and pollution will outlast us. What a story it will tell.

Dave
That you know is an under statement! I am hoping that the so called accidental collision is warning enough to keep a space war from happening as it would put an end to all space exploration and trap us all right here on earth!