The battle for the Arctic takes shape 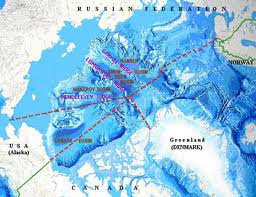 The Arctic Is Melting, So The U.S. Military Has Another Place It Has To Defend:  The Strategy opens by saying the Arctic is at a “strategic inflection point” because “its ice cap is diminishing more rapidly than projected.” This brings increasing “human activity, driven by economic opportunity” that ranges from shipping and fishing to fossil fuel extraction and tourism.

Most experts believe there will be no Arctic sea ice in the summer by 2030. Secretary Hagel said in his speech that the U.S. “will remain prepared to detect, deter, prevent and defeat threats to our homeland and we will continue to exercise U.S. sovereignty in and around Alaska.


Putin ramps up the world's fight for the Arctic

Putin said the Russian military has been restoring a Soviet-era military base on the New Siberian Islands that was shut down after the Soviet collapse. He added that the facility is key for protecting shipping routes that link Europe with the Pacific region across the Arctic Ocean.

Last month, a Russian navy squadron led by the flagship of Russia's Northern Fleet, nuclear-powered cruiser Peter the Great, visited the archipelago, which occupies a strategic position on the Arctic shipping route. Putin said that the military has already re-established a permanent garrison there and will restore an airfield and other facilities.China granted observer status in Arctic Council: The meeting also witnessed the signing of Kiruna Declearation, which recognized "the importance of maintaining peace, stability and constructive cooperation in the Arctic," and "the importance of the sustainable use of resources, economic development and environmental protection."

U.S.'s Arctic plans may serve as a wake-up call for Canada and the world as they scramble for the resources as the Arctic thaws.
The Cold War for Arctic resources is not just heating up – it’s leading to a growing militarization in the remote North.

That’s the conclusion a study by the Stockholm International Peace Research Institute, which claims that Russia, Canada, Denmark and Norway are all developing their military interests there. Also, more countries are seeking access to the region’s important natural resources and transport routes, such as “outsiders” like China, India and Brazil.

U.S.'s Arctic plans may serve as a wake-up call for Canada: The Pentagon wants to know what’s happening in the Arctic; there’s an app for that. Well not yet, but Defense Advanced Research Projects Agency wants one in a hurry. In a call for proposals this week, it said it plans to pick, deploy and test two systems this summer. “Remote sensing may offer affordable advantages over traditional methods of monitoring the region – aircraft, satellites or manned ships and submarines – due to the great distances in the Arctic,” the agency said in a call for bids.
The U.S. military wants “new technologies to monitor the Arctic both above and below the ice, providing year-round situational awareness without the need for forward-basing or human presence.” Nothing nefarious about that. Except that slicing up the Arctic as retreating ice heralds a 21st-century resources rush and shipping boom at the top of the world is shaping up as a race for riches and control.Do you think it will matter?
I have been covering this for 6 years now, remember: The scramble for the Arctic: Russia to station 2 military Brigades in the Arctic: Vladimir Putin said Russia would strongly defend its interests and Putin is back.

Russia's defense minister has said he plans to create two specialist army brigades to be based in the Arctic.The announcement comes days after Prime Minister Vladimir Putin said Russia would strongly defend its interests in the region.

Denmark to lay claim to North Pole: DENMARK which already counts Greenland and the Faroe Islands as its Arctic territories, is planning to lay claim to the North Pole.
This will put Denmark on a collision course with Russia, the US, Canada and Norway but they all better make a share deal and avoid conflict over this.

I wanted to discuss that in 2007 when Russia declared that it had successfully planted their flag at the bottom of the Arctic claiming it as Russian territory Russia was disturbed that Canada the US and others dismissed it as a joke saying that is worthless in the 21st Century. Myself I wasn't as sure as it seems like a scary ratcheting up of the race for future resources and world domination. Well attitudes are changing when recent events are taken into account. I am sure Denmark's joining this venture will simply be dismissed.

Russia's Mediterranean plans pale in comparison with its audacious foray into the Arctic where they collected soil samples and planted the Russian flag two and a half miles below the sea. The official purpose of this first-ever manned mission was "to prove that the North Pole is an extension of the Russian coastal shelf." Geologists say the region could have big oil, gas and mineral reserves. Massive oil reserves is more like it!

Knowing that the Arctic features prominently in Russian Imperial mythology and the rising desire for Russia to regain prominence as a world power you have to be very concerned about this and Canada now is. Canada's prime minister went on a three-day trip to the Arctic in an effort to assert sovereignty over the region a week after Russia symbolically staked a claim to the North Pole by sending submarines.

Five countries -- Canada, Russia, the United States, Norway and Denmark -- are competing to secure subsurface rights to the Arctic seabed. One study by the U.S. Geological Survey estimates the Arctic has as much as 25 percent of the world's undiscovered oil and gas. PM Harper, who has pledged to spend billions defending Canada's sovereignty over the Arctic, is said "Economic development -- unleashing the resource-based potential of the North, environmental protection -- protecting the unique Northern environment, national sovereignty -- protecting our land, airspace and territorial waters were his priorities.

" In response to the building interest in the shelf Canada's PM Harper announced that six to eight new patrol ships would be built to guard the Northwest Passage sea route in the Arctic, which the United States insists does not belong to Canada. Canadian PM vowed in 2007 to defend Arctic

U.S. Ambassador David Wilkins had criticized Harper's promise to defend the Arctic, calling the Northwest Passage "neutral waters." This is all very troubling as we watch the ratcheting up of tensions around the world as we try to move into the future. The increased militarism around the world is tenuous but throw all the recent developments in with what is shaping up to be a fight over the Arctic and its resources which will only serve to ecologically destroy another very important part of the Ocean's and world's ecosystem in what is increasingly appearing in trouble.

Denmark's interest and claim is also old. The scramble for the Arctic also gathered pace in 2007 as Denmark prepared to challenge Russia's bid for the North Pole and Canada vowed to defend its "sovereignty" over the region's frozen waters. Boy are they getting desperate! Over the next month they searched for evidence that the Lomonosov Ridge, a 1,200-mile, underwater mountain range running close to the Pole, is a geographical extension of Greenland, a Danish possession.

The mission it was felt would strain relations between Denmark and Russia, which claims to have found evidence linking the ridge to Siberia. Both countries will seek adjudication from a United Nations commission in the next few years that could award a large swathe of Arctic territory to the country with the most compelling case. The scramble for the arctic The time is coming closer!


With the ice melting all of a sudden everyone has a claim to the land below and we are racing to destroy the Arctic. It sickens me to hear lies like China, India, and the rest of them saying they just want a faster route of travel and want to protect peace and the environment. Russia and Canada are not the only ones who have long voiced the willingness to fight for what they believe is theirs. That Arctic Council is a joke and will stop none of the impending destruct but merely enlarge the amount of Countries allowed to do it.