A Two-State Solution died when Israel was born

Some Hear Death Knell for a Two-State Solution that died when Israel was born in 1948:

Some Hear Death Knell for a Two-State Solution: Despite indications that U.S. Secretary of State John Kerry is committing a substantial amount of time and effort to revive the long-stalled Israel-Palestinian “peace process”, a growing number of experts believe a two-state solution is no longer viable and the lack of a realistic discussion of the issue in the United States is leaving the country without an alternative policy.


In the two months since confirmation in his post, Kerry has made three trips to the region. On Monday, he hosted an Arab League delegation, including the League’s secretary general, the Qatari prime minister and representatives from the Palestinian Authority, Saudi Arabia, Bahrain, Egypt, and Lebanon.

Stop being delusional and get ready for the coming war 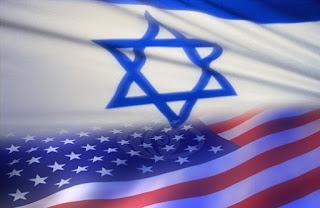 . Lieberman is barred from sitting in the Cabinet while he fights breach of trust and fraud charges. But he retains great influence over the new government. Speaking to his party Monday, Lieberman said the conflict with the Palestinians "cannot be solved. This conflict needs to be managed."
UN: Israeli-Palestinian conflict in 'profound and persistent deadlock': No kidding, "Israelestine only" 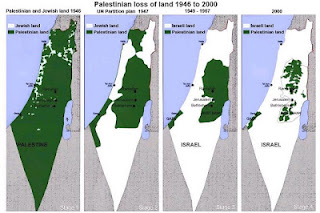 UN: Israeli-Palestinian conflict in 'profound and persistent deadlock': the Israeli Ambassador to the UN, Ron Prosor, told the Security Council that a Palestinian unilateral move for statehood in September "will not bring peace to our region." Israel does not want a 2 state solution period!

Israel will never agree to share Jerusalem period and neither will Hamas .Israel will resort to war period, especially knowing the US will come to their rescue and it bothers me. This is really getting old!

I wrote about it numerous times, to hell with Israel they are the problem. Netanyahu does not want peace until he gets everything he wants which includes all of Jerusalem. We have to take care of our own and let them hang themselves. Ahmadinejad was right in one thing when he said years ago that is Europe and the US felt so bad for what happened to the Jews in ww2 they should have given them part of their country. We would have no problem then. We are as guilty as them for not enforcing UN resolution 181. UN Resolution 181 that was established in 1947. Stop supporting Israel!

Make them go back to it and call it a frigging day!

I have been sick of Israel's lying about wanting a compromise, a two state solution. Ehud Barak had a viable solution Benjamin Netanyahu shot down. Netanyahu's lies to provoke and prolong this impasse holds the day. I am sick of this crap, I am sorry!

Israel Prime Minister Benjamin Netanyahu described the issue of settlements as a "marginal" part of peace talks and said he was glad the United States had abandoned its demand for a renewed freeze. BS, it is integral and proof Netanyahu does not want peace but all of Jerusalem!

Lack of a peace solution to the Israeli crisis we created keeps being blamed on the Palestinians and I for one am quite sick of it! Israel could lease Palestinian lands in exchange for Palestinian statehood: report I am thinking this can be done after all my apprehension if Israel really wanted a two state solution. With Palestine rebuffing Iran, Iran would be the one left out in the cold however Israel does not want this to succeed. Leave Israel to her own demise, I am sick of the lies!

They say that Palestinian refusal to recognize Israel as a Jewish state shows they are not serious about two-state solution. What about Israel's refusal to go back to 1967 borders, to stop building settlements, or to let Palestine have a homeland free of Jews if they want? What about UN resolution 181 established in 1947?

PLO wants map from US with future Israeli border Can you blame them? It will never happen though because we are Israel's lap dog.

Vice Prime Minister and Strategic Affairs Minister Moshe Ya'alon said that he saw "no chance of reaching a peace deal with the Palestinians in the near future". There is no way in hell ever because neither side really wants it. They want the other subversive, end of discussion.

"In the eyes of Palestinians, the occupation began in '48 and not in '67," Ya'alon told Army Radio. "Not only Hamas thinks this – Abu Mazen [Palestinian President Mahmoud Abbas does too." I think that too! I refuse to believe we took it upon ourselves to displace the Palestinians and give their land to the Jews in 1948 because we felt bad for them.

I reiterate: Palestinians for their part are doing their share for peace but it is futile: They are willing to let Israel control the wailing wall and just want East Jerusalem as their capital but there is no way in hell Israel is going to give that up as they swear it belongs to them. It does not belong to them. They do not want peace unless they get everything they want and they will not. This will only end in war and we will be dragged in. That is why Bush ignored Afghanistan to get into the Middle East. Right from the get go helping Israel against Iran was the goal.

Again I reiterate there will never be peace in the Middle East, period!Israel wants it her way and Iran/Syria want Israel obliterated, period, seems like peace is in Palestinian hands and depends on how much they are willing to bend because Israel will not. Israel and Iran have long been in preparation for this confrontation. As you know, when asked by a journalist how he felt upon returning to Iran in 1979 after 15 years in exile. Khomeini’s curt, one-word reply was “nothing” Whoa! From day one of his return to Iran Khomeini expressed no love for Iran only a love of the atom bomb. The drive even then was to possess a nuclear weapon though that desire is still denied until Iran can get their hands on one.

On the other side there is Israel who will give nothing and expects Palestinians to give up everything! I realized a long time ago that Israel is the world's chief war monger and we seem to do their bidding and fighting. If they get into a war with Iran we will end up coming to their rescue regardless of what they do or what is said or done and that is sad! We should in fact take care of Jewish American's and American's and our interests in Israel and otherwise tell them in no uncertain terms they are on their own if they continue to instigate war not peace and expecting us to come to their rescue. Well the heck with them we have given enough!

Well not surprising considering the closest we're gotten to peace is the Camp David Accord and we all know what happened after that.