China wants Dynasty back and reiterates we must be friends with U.S. to have a future. Well? 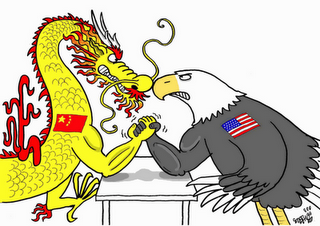 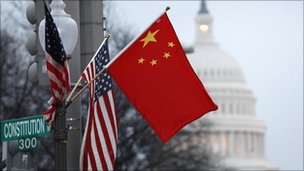 China and US hail 'shared interests': Xi Jinping has called for strong ties with the US, in the first high-level meeting between the two sides since he was confirmed as China's president.His comments came in talks with Jack Lew, who is in Beijing on his first overseas trip as US Treasury Secretary.

The two countries should approach the relationship "from a strategic and long-term perspective", Mr Xi said. "In the China-US relationship, we have enormous shared interests, but of course, unavoidably, we have some differences," Mr Xi said at a meeting in the Great Hall of the People in Beijing. "We stand ready to work with the US side to continue to develop this China-US co-operative partnership."

Remember China wants Dynasty back and reiterates we must be friends to have a future. Well?

US and China press reset buttonThis was a big week in US/Chinese diplomacy, but will it be a defining moment?

Now I have renewed hope that China will remember how important good relations are to both of our countries as we move through the 21st century.

Also more than two years ago: The US and China will never be the same but share the same big boat hit by huge waves They better wake up and stop making waves!

Cooperation between China Russia and the US is critical! Obama is right to say our ties will shape the future of the 21st century. The US and China are eying each other and moving very cautiously as they try to strike a balance. A few years back I began to view our relationship with China as the most important in the world. Not because we drove each others economy but because if at the time with Bush's instigation to war with Russia China due to the fact of how our 2 economies are so intertwined that if something happened China would side with us not Russia.

I hope that never happens and I feel increasingly confident we can take the road to peace and prosperity into the 21st century with a united world. Many of you know I repeat often that Nostradamus gave us two roads to travel into the future. Bush had us on the first road, the road to war and a disastrous future for man kind. I feel increasingly confident thanks to Obama we are now on the second road, the road to understanding and a successful prosperous future.

China is our Banker as well as North Korea's immediate neighbor. They hold more than a trillion dollars in our Bonds. They have more at stake here and around the world than anyone. Stakes are now enormous! China has to be a key partner in whatever happens here, in North Korea and around the world. We can not do this unilaterally. Along with Russia China and the US must work together to shape the future of the world!

China does not seem to have the leverage they use to or I thought they had. They do have an abstract leverage! They should want to be key players here. They are our banker and we owe them trillions. Being North Korea's immediate neighbor they would be the recipient of hundreds of thousands of refugees if not more. Regardless of the past that is gone. We have to be concerned with the future now. China is key to the world’s future and is very much in the balance.

We can not do this alone! Not just Russia but we need China to help with Iran and North Korea. China holds over a trillion dollars of our debt. They make many of our products so we keep them employed and in that respect we keep each others countries going. They sell the majority of the products they make to Wal-Mart and continue to loan us money.

We are intricately inextricably interwoven in a symbiotic roller coaster relationship. I don't know if I like it or not but it works and must continue. It will get bumpy along the way but I trust like it or not our relationship will continue into the foreseeable future. I am seeing China get stronger and increasingly taking over Japan's role in Asia too. We have many differences but one important thing in common, a desire for a successful future for our two countries! Things are looking up finally!