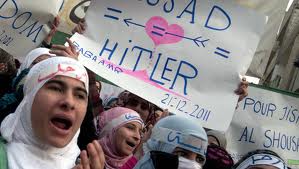 I saw an interview of pro Assad demonstrators and one woman was saying she wishes the Arab League monitors would leave because their arrival cued the beginning of the bombings and increased bipartisan killings. That is exactly right but the bombings signify an effort by Al-Assad to gain sympathy and backing for his killing of peaceful citizens wanting a Democracy. Following are the two bombings he blames on terrorists. You make up your own mind.

Hezbollah TV reports 30 killed, 55 wounded in car-bomb attacks; Syrian state television says initial investigations indicate al Qaida behind bombings: "The terrorist attacks left a number of martyrs, both civilian and military. Most of the victims were civilian," Syrian TV said in a news flash. State television also claimed that initial investigations indicated that al Qaida was behind the attacks. A witness from the Syrian Observatory for Human Rights said he heard heavy gunfire break out after the blasts. This is definitely Al Qaeda's MO killing civilians but?

Suicide bomb kills 25 in Damascus: Syrian TV: Syrian state television earlier showed body parts, bloodstains and broken glass from the blast in the central Maidan district, along with people shouting that this was the work of "terrorists." Several riot police shields could be seen in a wrecked bus, which was among several damaged vehicles. "Immediate information indicates that a suicide terrorist blew himself up at a traffic light in the Maidan neighborhood," state television said. "There are dozens of dead and wounded, mostly civilians."

The Government is blaming these attacks on terrorists or more likely protesters. Read the reports and you will agree that once again the Government did it killing a few of their own and mostly civilians to gain world sympathy for their brutal slaughter of her own people. The Government has been saying it is fighting armed intruders but in the beginning it was purely unarmed peaceful civilians. Seeing them getting slaughtered has been too much for some soldiers who have defected to help the people.

Scores more soldiers defect from Syrian army : A senior military officer in the Syrian city of Hama has defected along with up to 50 of his soldiers, in protest against the government’s ten-month crackdown on peaceful demonstrations that has claimed thousands of lives across the country. Colonel Afeef Mahmoud Suleiman, who is from the air force logistics division, announced his defection live on Al Jazeera's Arabic news channel on Saturday.

Suleiman said he and his men had taken on a new mission to keep protesters in Hama safe during demonstrations. "We are from the army and we have defected because the government is killing civilian protesters. The Syrian army attacked Hama with heavy weapons, air raids and heavy fire from tanks," Suleiman said. "We ask the Arab League observers to come visit areas affected by air raids and attacks so you can see the damage with your own eyes.

HEAVY clashes have broken out between the Syrian army and deserters, leaving 11 of its soldiers dead, human rights activists said. Another 20 soldiers were wounded in the fighting in Daraa province, south of the capital, while nine soldiers defected to join the rebel troops, the Syrian Observatory for Human Rights said.

It really peeves me that the monitors sent to keep Syria straight have been caught up in their slaqughter but have ignored it as some of them are killers in their own countries. Instead they simply state that the Syrian Government is facing armed violence. No kidding Assad was killing them and created an armed civil war on purpose.

Arab monitor chief confirms existence of armed groups in Syria: The result of the work by the Arab observers in Syria was the introduction of some amendments in the stance within the Arab League. In addition to recognizing the existence of armed groups in Syria, there is a growing call to strengthen the work of the observers, according to the protocol signed with the Syrian government. Yeah Bashar created them so he could have an excuse to kill civilians and quell the drive for Democracy

Plea to Arab League to monitor Syrian flashpoints - Yahoo! News: The Arab monitors are there to help teach the Syrian regime how to kill their own ... Arab League peace monitors ... suspected of major human rights abuses ...news.yahoo.com/plea-arab-league-monitor-syrian... -

Syrian regime: We are being targeted by "terrorists": Coffins bearing 11 policemen, covered with Syrian flags, were brought into the Al-Hassan mosque for the prayers, a day after the explosion ripped through a Damascus intersection, killing 26 people and wounding 63. Officials said the attack was a suicide bombing, the second in two weeks to hit the normally quiet Syrian capital.

The regime of President Bashar Assad has touted the attacks as proof that it is being targeted by "terrorists." But the country's opposition demanded an independent investigation, accusing forces loyal to the Syrian regime of being behind the bombing to tarnish a 10-month-old uprising against Assad. The bombings have coincided with a mission by Arab League observers investigating Syria's crackdown on the protest.

I agree with the opposition that there should be an investigation but by an independent source so one side or the other will not purposely be found at fault. Dahida Abdul-Rahman, 50-year-old housewife at the prayers, said the Arab observers should be thrown out of the country. "Since they came, terrorist attacks started," she said. She is dead right and it is being done by the Government to gain sympathy for their murder of civilians and their deserter protectors.

I said when soldiers first defected that it would take the whole army as they are fighting the IRG too.The Government is blaming this attack too on terrorist or more likely protesters. Read the report and you will agree that once again the Government did it killing a few of their own and mostly civilians to gain world sympathy for their brutal slaughter of her own people.

This really brings the confusion in Syria and the middle east and the world full swing for me. Once again I am left dumbfounded. From the beginning with the occurrence of 9/11 we were told and we knew that we were in a different world that required a new way of thinking. Meanwhile we routinely prove incapable of doing that when confronted with the so called terrorists.

However we have done exactly that when it comes to the average well intentioned citizens of the world. In every Government in the world today lying has become the new truth. Governments including the United States routinely lie in order to create a grey area in which to hide the truth from the people of the world so we do not know who is telling the truth, what the truth is, and they can follow their deceitful destructive agenda.

Syria and Bashar Al-Assad appear to be the masters. From the beginning of the chaos in Syria we have been saying that Iran more specifically the IRG (Iran Revolutionary Guard) was in Syria helping if not leading the way in trying to quell the uprising. You know Bashar's only friend Iran is dictating that this slaughter is a necessity though Syria knows how to brutalize its people all to well. Iran will not allow a Democracy at her door step further isolating her.

That in itself defies logic because Iran is Shiite and Bashar and the ruling minority is Sunni like Al Qaeda and Saudi Arabia who we said would come to the aid of the citizens who are largely Shiite. It is all very confusing. Al Qaeda would not destroy Sunni security offices killing Sunni forces or would they?

However Bashar has already proven capable of killing his own to blame it on protesters and further his cause. He is also flat out lying saying protesters have killed 2000 of his security forces, a number pulled out of the air in order to kill and quell those against him. This Bashar created civil war is barely starting unless he leaves and he will not.

James Joiner
Gardner, Ma
http://anaverageamericanpatriot.blogspot.co
Posted by jmsjoin at 2:00 AM

You still seem to want to define these conflicts as being Suuni against Shiite. That's not exactly the case. Shiites have fired on our troops in Iraq and not because they were infiltrators as some would have you believe. This mess was created long before Bush took office when we backed the dictators or should I say installed the dictators we see today. And the reason? We only wanted someone in power who could control the people and gain the resources.

Interestingly I was watching foreign news yesterday and find that there are major protests in the old Chec republic as well as Romania. We're witnessing economic inequities and injustice on a world scale. All nations screaming about debt but the only solution they can find is more debt all laid on populations that had little to do with the problem in the first place. Forget the labels and tribal differences and keep an eye on the money or should I say phony money and the austerity programs being put in place and you'll see where the conflicts will be.

Just wanted to say Congrat's Jim to ya'll's Patriots with their victory earlier today over the Ravens, and Champs of the AFC! Their Indy bound Guy ... and I will guess already the favourite as far as "picks"