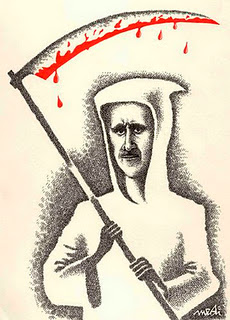 Assad's political, military foes step up pressure :The Syrian National Council, an umbrella group, said in a statement the decision was taken in talks on Saturday night with the Syrian Free Army (SFA), formed of deserters from the military.

A liaison office was set up and "a hotline to follow internal political developments on the ground," it said.
The statement said further meetings would be held involving military experts "to strengthen the capacity of the SFA against regime forces and to protect civilian regions which the regime wants to raid or pillage."

'Quds Force to aid Syria if outside forces interfere': The source said that Iran believes that the situation in Syria is different than "other countries that saw similar protests," adding that the Revolutionary Guards "surround" Syria through their allies in Iraq and Lebanon.

The Iranian military official also said that "sources" in Syria have assured Tehran through official channels that the situation in Syria is "stable," despite reports of continued deaths in clashes between anti- and pro-government forces. Qatar's emir Sheikh Hamad bin Khalifa al-Thani became the first Arab leader Saturday to express interest in sending troops to stop Assad's "killing."

Only Syria can recieve outside help: Russian weapons ship arrives in Syria: The cargo ship MV Chariot, flying the St. Vincent and Grenadines flag, was en route from St. Petersburg to the Syrian port of Latakia carrying from 35 to 60 tons of ammunition and explosives meant for the Syrian Defense Ministry.The Russian Foreign Ministry said the ship carried a “dangerous cargo,” but did not elaborate. According to the documents, the cargo sender was the Russian state arms trader Rosoboronexport.

Dahida Abdul-Rahman a 50-year-old housewife at prayers, said the Arab observers should be thrown out of the country. "Since they came, terrorist attacks started," she said. She is dead right and it is being done by the Government to gain sympathy for their murder of civilians and their deserter protectors.
I said when soldiers first defected that it would take the whole army as they are fighting the IRG too even though for now itt is denied.The Government is blaming this attacks on terrorist or more likely protesters.

This really brings the confusion in Syria and the middle east and the world full swing for me. Once again I am left dumbfounded. From the beginning with the occurrence of 9/11 we were told and we knew that we were in a different world that required a new way of thinking. Meanwhile we routinely prove incapable of doing that when confronted with the so called terrorists.

However we have done exactly that when it comes to the average well intentioned citizens of the world. In every Government in the world today lying has become the new truth. Governments including the United States routinely lie in order to create a grey area in which to hide the truth from the people of the world so we do not know who is telling the truth, what the truth is, and they can follow their deceitful destructive agenda.

Syria and Bashar Al-Assad appear to be the masters. From the beginning of the chaos in Syria we have been saying that Iran more specifically the IRG (Iran Revolutionary Guard) was in Syria helping if not leading the way in trying to quell the uprising. You know Bashar's only friend Iran is dictating that this slaughter is a necessity though Syria knows how to brutalize its people all to well. Iran will not allow a Democracy at her door step further isolating her.

That in itself defies logic because Iran is Shiite and Bashar and the ruling minority is Sunni like Al Qaeda and Saudi Arabia who we said would come to the aid of the citizens who are largely Shiite. It is all very confusing. Al Qaeda would not destroy Sunni security offices killing Sunni forces or would they?

However Bashar has already proven capable of killing his own to blame it on protesters and further his cause. He is also flat out lying saying protesters have killed 2000 of his security forces, a number pulled out of the air in order to kill and quell those against him. This Bashar created civil war is barely starting unless he leaves and he will not.

I do believe that Syria will be able to pull this off. The protesters may be out numbered but they have the determination. When there is nothing left to lose what other option do they have? I believe it will be a slow process but the opposition will win in the end.

I thank you for the invite but must say that this old computer doesn't handle voip. I hope though to be able to listen in if I can find their web site. Do you have a link?

I've been listening to several of the roundtables of the occupy movement. There's one every thursday around 4pm eastern that lasts for a couple of hours.
Go to occupystream.com and click on UK tab.

I'll be out today. Get back to you later.

jmsjoin said...
This comment has been removed by the author.
3:58 PM

Here you go. I was going to give it to you but did not think you should comment or anything because it is an invite only.

I have seen people dumped. The show I did is 6pm Sundays there is something on Fridays and Saturdays but not sure what.

Gwendolyn does it and they remind you well before it airs here. Not sure what else goes on. I didn't know there were other groups. I might get into this. I am going to check that out so thanks but here it is. Here