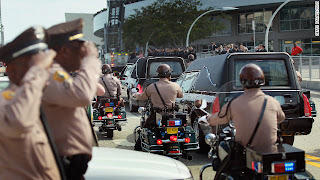 Tuesday, August 16, 2011
Senseless police killings worsen in our degrading society: Are police fears of a war on cops valid? You bet South Dakota police officer killed, 2 others wounded in shooting: A police officer was killed and two others wounded in western South Dakota's Rapid City after a man pulled out a gun and fired several times at them Tuesday, authorities said.The shooting was the first on-duty officer fatality in the city of 68,000 since 1985.

Another policeman shot and killed just for the hell of it!

Officer 'extremely critical' after apparently unprovoked shooting: A police statement says the officer was at an intersection late one afternoon when a car linked to an earlier shooting came alongside. Witnesses told police someone fired a shotgun at the officer from the passenger window. The man was called suicidal which brings "death by cop" to the forefront but that is another story in our growing hell.

Kill a cop continues to be more popular than ever!

police fear a war on cops and there is ; In January In just 24 hours, at least 11 officers were shot. The shootings included Sunday attacks at traffic stops in Indiana and Oregon, a Detroit police station shooting that wounded four officers, and a shootout at a Port Orchard, Wash., Wal-Mart that injured two deputies. Then two officers were shot dead and a U.S. Marshal was wounded by a gunman in St. Petersburg, Fla.also two Miami-Dade, Fla., detectives were killed by a murder suspect they were trying to arrest. Last I heard the death toll is now up to 189.

'Keep Them Safe': Feds Seek To Stem Police Deaths Forget it, it will get worse as our situation degrades.

Last year "really marked the deadliest year for law enforcement in nearly two decades and that is obviously very worrisome." Holder said before his meeting with police chiefs from more than 25 cities and representatives from several federal law enforcement agencies. "This year we are unfortunately on track to exceed the number we saw last year," Holder said. "These numbers are simply unacceptable. Our law enforcement officers put themselves in harm's way every day."

Twenty-three officers and federal agents have been gunned down this year compared to 15 officers killed by guns at the same time last year. A total of 49 officers have been killed already this year, including five federal agents, according to the National Law Enforcement Officers Memorial. Those figures do not include the most recent killings. A total of 162 officers were killed in 2010, 61 of whom died from gunshots.

Last year with desperation increasing there were 162 police killed. People are increasingly desperate and emboldened to take on and kill cops often as a way to kill themselves. Sadly for us this is all normal and a natural part in the end of the life cycle of a society. 10 other officers shot nationwide and we had a short respite, the respite didn't last long!

First, as a society we were following the natural life cycle of a Nation and were moving along the path of the Roman Empire and every other society before us. Bush had merely sped that process up! He was doing the same thing to the planet as he thinks he was doing Gods work. God however will get these idiots for doing what even they the Religious right say was his to do.

We are going against the cycle of life man and the planet are in and life only moves in one direction, forward, and we are trying to turn the clock back.

Man has taken his ability to live and learn, an ability that has sustained and nurtured him for thousand of years and forgotten he ever had it. It had served us well throughout are creativity. Through the beginning of the 20th century man has been going through the maturity stages of his existence. Like a maturing teenager man now thinks he has all the answers. However he has none of the right ones. Would you send your Grandmother off to war? That is something you can relate to. Likewise man and the planet can not survive a world war this late in the life cycle of man and the planet. Whoever ushers in a new world war must be held personally accountable for knowingly and unwittingly bring about the end of the civilized world and our planet.

* Sadly man seems to have chosen the 2nd road and with nuclear conflagration or planetary destruction in many forms staring us in the face: We seem to be leading the way to our and the Planets demise! I wrote this seven years ago but again it is dead on please read the whole thing
In the end we seem to now be here not to further the life of the planet our host life form but to end it.


James Joiner
Gardner Ma
http://anaverageamericanpatriot.blogspot.com
Posted by jmsjoin at 2:00 AM

I've noticed a large change in our law enforcement in the last ten years. Cops used to diffuse situations with calm logic. Most acted in a professional manner going about their daily tasks. Now we have a more military militant police force where everyone but them is seen as the enemy. Here at least even the FBI has criticized the way they do things. Innocent people getting kicked in the head and several people shot dead by police even before one question was asked. I can understand one cop having a bad day but this has become the norm.
I don't see it getting any better since the state has cut back on mental health as well as drug treatment programs. As one former drug patient put it when the treatments stop the streets are going to look like a war zone. I think I'll heed his advice and not travel to certain parts of the city at night at least not alone.

Death comes with the territory, other than that, no comment's further on this, but good posting Jim, really!