Troops Forced To Join Army or Lose as Navy & AF are cut: Another move To Avoid A Draft! 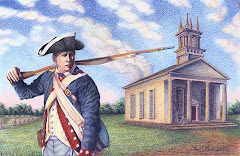 I was going to do a post today on bush's created sectarian civil war In Iraq worsening by the day.
http://anaverageamericanpatriot.blogspot.com/...

I saw this story though and am a little bothered. In the past we have done many posts on the fact that Bush has raised pay, increased benefits, raised bonuses,(all of which are deserved), but he has also increased the maximum enlistment age (42 and a grandparent is the last I heard.

Of late we have heard that 7'000 navy personnel were being trained to fight In Iraq and give combatants a break. I don't know the number but it is also being done with Air Force personnel.
Normal enough at first hear but read beyond the first line. How low will they go? Im appalled. These were members of the military harmlessly training on the border right? Wrong!
They were the members of the first platoon of Alpha Company, completing two and a half hours of marching in the hot sun at the National Guard headquarters Saturday.

Alpha Company is composed of former Air Force and Navy men and women who are switching to the U.S. Army. Still sounds somewhat normal but getting suspicious!

Then we start learning the truth!

As many as 50,000 military men and women were recently informed they no longer had jobs -- a result of reductions in the size of the Air Force and Navy. The Army, however, is always in need of a few good soldiers. So many of the men and women, instead of taking a discharge, come to New Mexico to train to be in the Army.
You first think Border patrol but they are now in the Army, Eligible for Iraq!

The 30-day training includes a stimulated firefight in the ruins of the old New Mexico State Penitentiary. There also are drills on running check points, rappelling, handling weapons, urban warfare, improvised explosive devices and grenades. The trainees also learn how to march Army style.Many of the men who help with the training have been deployed in Iraq and know, from firsthand experience, what soldiers are likely to see there or other places they might be sent in the world. Take the New Mexico virtual tour!

You can bet they will be. Bush misuses and abuses everything and everyone including the military. People used to enter a branch because it offered the level of discipline, lifestyle, or whether you wanted to fight, if so what type of fighting. I don't know what to say or think about this. He is the original backdoor man!