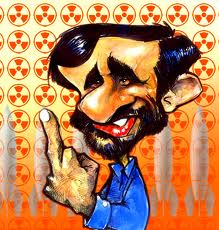 Remember this? US navy to position three aircraft carriers near Iran: US President Barack Obama has warned that Iran’s leaders have to understand that “the window for solving this issue diplomatically is shrinking.” The US navy will have three aircraft carriers positioned near Iran in the coming days, and is doubling the number of minesweeping ships and helicopters based in the Gulf. Israel, meanwhile, is keeping up rhetoric that makes many think the Jewish state — the Middle East’s sole if undeclared nuclear power, which is not involved in the talks — is serious about possibly attacking Iran, with or without US support. A majority of Israel’s 14-member security cabinet now supports Prime Minister Benjamin Netanyahu in launching a pre-emptive strike on Iran in a bid to end its nuclear programme, the Israeli newspaper Maariv reported on Thursday, citing political sources it did not identify. “Israel is very close to the point when a very tough decision should be made — the bomb or the bombing...

It's real! Navy test-fires first working prototype rail gun: Navy officials told FoxNews.com this week that the rail gun, which relies on magnets rather than explosives to fire bullets at several times the speed of sound. Rather than relying on chemical propellants like gunpowder, the rail gun uses an electromagnetic pulse to create strong magnetic fields that propel the conductive bullet on a sliding metal sled and out of the barrel -- at 4,500 to 5,000 miles per hour and as far as 100 nautical miles away in about 5 minutes, with possible future expansion to 220 miles, according to ONR.The Navy’s most advanced shipboard gun in operation today, the 5-inch,54-caliber lightweight gun, has a range of about 13 nautical miles

Navy wants commando 'mothership' in Middle East: The Pentagon is rushing to send a large floating base for commando teams to the Middle East as tensions rise with Iran, al-Qaeda in Yemen and Somali pirates, among other threats.In response to requests from U.S. Central Command, which oversees military operations in the Middle East, the Navy is converting an aging warship it had planned to decommission into a makeshift staging base for the commandos.

Unofficially dubbed a “mothership,” the floating base could accommodate smaller high-speed boats and helicopters commonly used by Navy SEALs, procurement documents show. Navy documents indicate that it could be headed to the Persian Gulf, where Iran has threatened to block the Strait of Hormuz. The deployment of the floating base could also mark a return to maritime missions for SEAL teams, which for the past decade have spent most of their time on land in Iraq and Afghanistan.

In an undated photo supplied by Lockheed Martin, an Aegis-equipped destroyer launches a missile, using hit-to-kill technology to intercept and destroy short- and medium-range ballistic missiles.

The US Navy recently performed its first test of its new HEL system, destroying a small boat in a matter of moments. We've got the video above. The Navy has begun field testing early versions of its high-energy laser (HEL).

This concept of fighting with rail guns that fire non explosive projectiles at supersonic speeds to put holes in ships 100 miles away and destroy their munitions at the same time and firing lasers to destroy the engines of small boats to disable them is at first glance a concept strange and hard to comprehend in an environment of today's high tech weapons.

However make no mistake, these weapons are very high tech, still under design, and geared towards an enemy and location we will be facing in the future. It is no coincidence that these weapons were tested at the same time the military tested its most challenging test yet of its ballistic missile defense system, blasting an incoming target out of the skies over the Pacific Ocean.

I remember in 2009 when Obama first announced he was scrapping Bush's missile defense system that did not work other than to instigate war for the Aegis system used on land or water to go after land or water fired intermediate-range missile's. This was the first successful test of a land fired missile from a ship. Of course defending against Iran in the future is the announced goal. Iran can already reach Europe. US Military Successfully Tests Missile Defense System

That said, at the same time we test the high energy laser successfully its goal to be soon on every navy vessel in order to be fired from the ship at the motors of small boats setting them on fire thus disabling them rendering them useless and dead in the water. Supposedly the HEL would come of use against pirates but it is no surprise that Iran banks heavily on its use of small high powered boats in the Gulf. After watching the video disabling Iran's small boats used by the IRG is the least of the Lasers use. It has been worked on for decades and can take out Iran's much bragged about missiles by themselves.

These Lasers are designed to take them out of the equation. It is no surprise that both Bush and Iran with the IRG (Iran Revolutionary Guard) did everything possible to instigate war and it was only because cooler heads prevailed that they were not successful in this endeavor. There were many provocations as you may remember by fast boats just like the one taken out in the video above. We now have a defense against them.

It is only a matter of time before we at the very least have a "confrontation" with Iran. I always figured it would come from the Gulf as Gates said the navy as of yet is not over extended. Iran's primary navy weapon seems for now to be those high powered boats. We seem to be building a defense and offense capable of handling a confrontation with Iran and the IRG. At this point between Iran and Syria a confrontation is coming so I am glad to see we seem to be as prepared for it as possible. You still have to wonder about Russia and China who promise to stop US hegemony, that after all is why Putin is becoming Russia's President again.

First off I thought everybody knew that we had 3 carriers in that part of the world. They've been there for several months.
Second I wish we'd stop spending billions trying to develop the ultimate weapon. That laser is easily defeated with some simple foil. Also depends on weather conditions.
Third the defense systems such as "patriot missiles" aren't as accurate as once thought. Only about 30% effective after a review. Even the stealth helicopter didn't hold up in Pakistan.

I'm sure you saw the report that Russia had sent an anti terrorist team to Syria although I can't confirm that yet. And I'm now finding out that the reason we can do little to help Syria is because NATO is stretched so thin that it can't cover home countries and fight another war. NATO barely managed to cover Libya.

They move those damn things around so much. In 2007 we had 5 and the Charles Degaulle was guarding the mouth of the Gulf.

That was when we had hoped we would get things going. Always thought the refueling tankers fly from Diego Garcia would be the tip off but who knows any more.

Oh yeah, someone mentioned that about Russia which means they will be ferreting out the protesters for Assad. Wonder when we are going to come out? I do not like this. Now that you said that I am going to look into that. Take care!