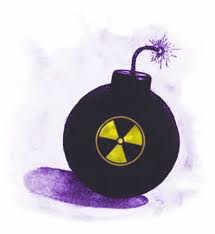 I did a story a couple months back about tests that were conducted years ago at White Sands putting soldiers right next to ground zero to test a new kind of nuclear bomb with no fall out and it worked. Here it is!

JUST ANOTHER WEAPON : The year was 1955, and the U.S. Army had embarked on a program of developing relatively small tactical nuclear weapons that could be used on the battlefield.A series of atmospheric tests in Nevada had convinced military scientists that properly trained soldiers could not only survive such explosions but also take part in maneuvers planned to exploit these weapons.

These hypotheses, however, had never been tested, and the atomic bomb had taken on very frightening connotations. So to demonstrate that the weapons were “safe,” the Army decided to run a test with live soldiers. The purpose of the test was to teach troops that the bomb was just another weapon of war.

Test participants were selected from various units across the United States. I had just been promoted to captain and was stationed at Fort Bliss, Texas. I considered the opportunity to see a nuclear explosion a once-in-a-lifetime experience and was the first in my unit to volunteer.

Not only was I selected to take part, but I was put in charge of the entire 4th Army contingent, a group of two hundred and fifty officers and enlisted men drawn from posts throughout the Southwest. I knew one man slightly. The rest were strangers.

Our group assembled at Fort Bliss and began a two-day train ride to Las Vegas, Nevada, about an hour’s drive from the test site. During the trip I established a simple organizational structure, placing each of five lieutenants in charge of about fifty people. Together we prepared a handwritten list of the participants. Our morale was high.

We all looked forward to a unique military experience as well as a chance to do a little gambling. Our train arrived in Las Vegas so late that it became apparent we would have no supper that evening. However, a call to Camp Desert Rock, the tent city at the Nevada test site where we would sleep during our planned three-day stay, brought assurances that hot coffee and doughnuts would be waiting for us when we arrived around midnight. It was not. Nor had our group been assigned particular tents.

We were instructed to find cots wherever we could until more permanent arrangements could be made the following day. That plan might well have worked if one of the most violent storms in recent Nevada history had not struck at about three o’clock in the morning. It blew away every tent in Camp Desert Rock, soaking everyone and their personal belongings. Our personnel list disappeared.

I found I was responsible for two hundred and fifty wet, hungry, disgruntled soldiers whose names I didn’t know and who were scattered throughout the countryside. A noontime breakfast got everyone back together, and by evening a modicum of order had been restored—just in time for everyone to board buses for the big city.

The return buses left Las Vegas at 1:00 A.M. and arrived at camp an hour later. At 4:00 A.M. we were awakened for a dry run of the test. We boarded buses and drove for about an hour into the desert, where a series of trenches about eight feet deep awaited us. We climbed in, crouched for about an hour, and then returned to Camp Desert Rock, arriving about 8:00 A.M. We had the rest of the day to enjoy the 118-degree temperature in open tents in the middle of the desert. Little did we know this would be our normal routine for the coming week.

The test, called Apple II, was scheduled for the day following the dry run. However, after we settled in our trenches, wind conditions were pronounced unfavorable and the test was postponed. This sequence was repeated on the next five mornings. By this time only a few had money left to go to Las Vegas.

However, those who did learned that each evening a light on one of the buildings downtown indicated to the local populace whether there would be a test the next day. A blue light meant no test; a red light meant there would be one. Apparently our superiors hadn’t bothered to check the light each evening. On our seventh morning we learned that the light had been red the previous night, so we felt confident that this would be the real thing.

Our trenches were just over a mile from ground zero, the point immediately below the nuclear device. (No one ever used the term bomb.) We were told that the test device was roughly the same size as the bombs dropped on Japan and was located in a tower several hundred feet above the ground. We were also told there would be a bright flash, followed by a wave of heat. Next would come the ground shock. Finally there would be a rush of air as the blast wave passed over us.

At that point we would be able to leave the trenches and walk up to an area near ground zero where we could see the effect of the explosion on various types of military equipment. Since I knew that the blast wave would travel at the speed of sound (eleven hundred feet per second), I calculated that it would hit the trenches about six seconds after the explosion.

If I allowed a second for the blast to pass and an extra second’s margin, it would be safe to stand eight seconds after the initial flash. This meant that if I counted carefully, I would be able to view the fireball much sooner than my colleagues, who would be waiting for the official word to stand up. As the time for the explosion approached, we all crouched in the bottom of the trenches with our arms over our eyes. We shivered slightly in our field jackets; the desert is cold at six o’clock in the morning. Finally the countdown started —sixty seconds, thirty seconds, twenty, ten, five, four, three, two, one—and then came a flash of unbelievable intensity.

In the brilliant light I saw through my jacket—and through my arm—the pebbles at the bottom of the trench. (For many years I thought this must have been some type of optical illusion. However, I have recently learned that this is a real phenomenon, apparently caused by X rays induced by the explosion.) Contrary to my expectations, the flash lasted for a considerable time, more than a second.

As I was recovering from was recovering from the flash, the temperature changed from morning cold to well above that of the hottest day I could remember.Then, as I was reconciling myself to the blast of heat, the earth suddenly jumped what felt to be about six feet in the air and then fell back and began to tremble violently.

The thought rushed through my mind: They’ve miscalculated and blown up the whole world. After what seemed a very long time, I finally had convinced myself of the world’s probable survival when suddenly a tremendous freight train roared directly over my head. This lasted about a second, and then all was quiet—until a few seconds later, when the train roared back going the other way. Now all was quiet. I lay quivering at the bottom of the trench, the counting of seconds long forgotten, when the announcement came that it was safe to stand up.

By now several minutes had gone by since the initial explosion, and the fireball had spread considerably. Even so, it was a remarkable sight. A thousand colors, shining and mixing and changing and migrating—like tiny, colorful lightning flashes—appearing, disappearing, and appearing again. All of us stood in awe as the cloud expanded, gradually losing its colors and turning into a vast brown-gray balloon. The broad, dirty stem connecting the cloud to the ground slowly dissipated, and the now colorless ball of debris drifted away into the distance. The show was over.

About half an hour after the explosion, we were allowed to walk toward ground zero, stopping about two hundred yards from the actual spot. Along the way we saw an assortment of obliterated military vehicles, weapons, and dummies. The most impressive item was a heavy battle tank that had been split in two by the blast, with the turret blown one way and the main body the other. Contemplating my experiences in the trench, I realized that I was no longer concerned about nuclear weapons. I was now terrified by them.

Later in my military career I took part in many map exercises and maneuvers in which commanders simulated the use of nuclear weapons, often rather casually. I listened to a number of armchair war hawks, as well as some very prim and proper ladies, advocate that we drop a couple of nukes on Hanoi or Baghdad or Pyongyang to show those people we meant business. I feel confident their opinions would have been different if they had been in the trenches at Apple II.

My last assignment in the Army was with the Defense Atomic Test Command in Albuquerque, New Mexico, where I was the test-group director for two underground nuclear tests.

After I retired in 1970,1 got a Ph.D. in nuclear engineering from the University of Texas, and taught there for several years before leaving to start my own business. At present I am in great health and, to the best of my knowledge, I have suffered no ill effects from Apple II or my other work in the field. My wife and I have three healthy, intelligent children and six world-class grandchildren, with probably more to come. A few years ago there was some concern that participants in the Nevada test might have suffered long-term health effects. The Army responded that it had no way to evaluate the impact of the test; it had kept no record of the people who had taken part. —Dr. John H. Vanston is the chairman of Technology Futures, Inc.

* That was very interesting! I have been long convinced they are going to use them and they are survivable to some degree. My concern is the degree to which they get tossed about and what will happen to the environment and that the planet will not be sustainable as we need it today. I am convinced they know that! A few years back I had an Indian Politician and Professor send me a link and a story he wrote saying when all is said and done Pakistan and India would unite against the infidel if they attacked and whoever starts a nuclear war will be defeated by the rest of the opposing nuclear powers.

I commend all nuclear nonproliferation efforts but knowing this and knowing every country possessing Nuclear weapons reserves first strike rights and the situations ramping up rapidly with Israel, Pakistan, India, Ira, Russia? China? etc I do not see a nuclear war as being avoidable as too many are willing to use them and are willing to gamble they will live to fight another day. As I keep pointing out, mutual destruction use to be a deterrent but today it seems to be the goal.


James Joiner
Gardner, Ma
http://anaverageamericanpatriot.blogspot.com/
Posted by jmsjoin at 2:30 AM