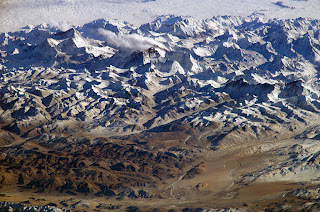 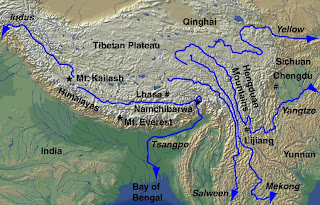 China will "smash" any plan to undermine Tibet's place within China because the Himalaya's are China and Asia's water supply. Control that and you control Asia or start a war?

Droughts and water shortages already been driving conflict around the globe: The potential for conflict is more than theoretical. Turkey, Syria and Iraq bristle over the Euphrates and Tigris rivers. Sudan, Ethiopia and Egypt trade threats over the Nile. The United Nations has said water scarcity is behind the bloody wars in Sudan’s Darfur region. In Somalia, drought has spawned warlords and armies. Already, the World Health Organization says, 1 billion people lack access to potable water. In northern China, retreating glaciers and shrinking wetlands that feed the Yangtze River prompted researchers to warn that water supplies for hundreds of millions of people may be at risk. Water wars will worsen

Water has emerged as a key issue that could determine if Asia is headed toward cooperation or competition. No country would influence that direction more than China, which controls the Tibetan plateau, the source of most major rivers of Asia. Tibet's vast glaciers and high altitude have endowed it with the world's greatest river systems. Its rivers are a lifeline to the world's two most-populous states - China and India - as well as to Bangladesh, Burma, Bhutan, Nepal, Cambodia, Pakistan, Laos, Thailand and Vietnam. These countries make up 47 percent of the global population.

Yet Asia is a water-deficient continent. Although home to more than half of the human population, Asia has less fresh water - 3,920 cubic meters per person - than any continent other than the Antarctica and China is taking it. The looming struggle over water resources in Asia has been underscored by the spread of irrigated farming, water-intensive industries and a growing middle class that wants high water-consuming comforts like washing machines and dishwashers. Household water consumption in Asia is rising rapidly, although several major economies there are acutely water-stressed.

The specter of water wars in Asia is also being highlighted by climate change and environmental degradation in the form of shrinking forests and swamps that foster a cycle of chronic flooding and droughts. The Himalayan snow melt that feeds Asia's great rivers could be accelerated by global warming. Man am I naive! I couldn't understand China's wanting to control Tibet, the Himalaya's, and the Dali Lama, now I know. Asia's water wars It is all about the water period!

This is a crisis that will only worsen every day around the world . Tens of millions of Americans have or are migrating to the southern and western states where there are many areas of chronic water shortages (duh). Remember when then Governor Bill Richardson fired the first shot, suggesting a national water policy, which is shorthand for stealing water from the Great Lakes. Rust belters were outraged, some suggesting we sell Richardson water at $80.00 a barrel.

Vegas, probably the fastest growing area in the country, is sucking as much from the Colorado as it can, and will still have major shortages, perhaps within months. The Great Lakes are in a low cycle and any diversion would probably be an ecological disaster. I was looking at the links that follow and the Great lakes are being fought over as we speak and America is already experiencing water wars as well as much of the world. Please look at the overwhelming amount of stories on The worlds water wars

The world is already at war with our shrinking changing environment. A war we are bound to lose. I cannot comprehend the world racing to another world war that will only serve to seal all of their demise even sooner. What is wrong with us?

The question isn't so much how much water there is but how much clean water we have. People fail to see that difference. The other question is the limits to growth. Back in the 70s there was a book by that very title that predicted our total demise around the turn of this century. As you can see that hasn't happened. And as draughts prevail people are smart enough to move or die trying.
My biggest concern is with people who think that we can use our waterways as a garbage dump and not think there are consequences.

Demeur I am convinced people are painfully aware of acid rain and what it has done around the world not to speak of nuclear waste and fall out.

It is sick what we are doing to the oceans life's very source and I am stunned most seem not to get that. It is our largest source of oxygen not the rain forest.

I taught my sons as infants that we must take care of our water. You can put a little into a clean source and it will clean itself. Too much and it will clog up and die. The world as a whole has not learned that.

You really have to be such paranoia of everything China has? China obsessed over Tibet to control water sources!? I think the Chinese ancestors were even craftier to build a civilization in East Asia so that their children could control Tibetan plateau, South China Sea, and in future, the Siberia and Alaska. Everything's strategically planned million of years ago. So look out!