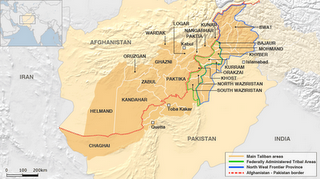 Both Pakistan and Afghanistan are benefitting from Pakistan's military operations, better surveillance by law enforcement agencies and the death of key militants in U.S. drone strikes, a think tank said Sunday. Pakistan's anti-terror efforts are a key focus of the Obama administration, which wants the country to do more to target Taliban militants who regularly launch attacks against U.S. troops in Afghanistan.

U.S. officials have also expressed frustration with Pakistan's unwillingness to launch an offensive in North Waziristan, part of the country's lawless tribal region that hosts a large number of militants who wage attacks in Afghanistan. The Pakistani army says its troops are stretched too thin by other operations in the tribal region. But many analysts believe the military is reluctant to cross militants with whom it has historical ties and could be useful allies in Afghanistan after foreign troops withdraw.Attacks down almost 20 percent in Pakistan

Pakistan's unwillingness to go into North Waziristan home of the Haqqani's is in my mind what is keeping the attacks down for now but the U.S. has responded by more than doubling the number of drone strikes in the tribal region. There were close to 120 such strikes in 2010, most of which occurred in North Waziristan. Prime target, the Haqqani's

For now NATO appears to be smoking the Haqqani's and have them on the run. I recommend reading this link! The deadliest group of Taliban fighters in Afghanistan "the Haqqani's" has not conducted a complex large-scale attack in the capital city of Kabul for seven months, its momentum stymied as elite American-led commandos have escalated raids against the militants’ bomb makers and logisticians. In the past three months alone, commandos have carried out 1,784 missions across Afghanistan, killing or capturing 880 insurgent leaders. Taliban Fighters Appear Quieted in Afghanistan

New and increased drone attacks come in Khyber, an area abutting Afghanistan’s Nangahar province, that’s been notably drone-free. It has become an area for militants fleeing military action in South Waziristan. They also bring the drone-strike tally for this year up to 113, more than twice last year’s 53 strikes. But those figures don’t begin to tell the whole story.

According to a tally kept by the Long War Journal, 58 of those strikes have come since September: There has been a drone attack every 1.8 days since Labor Day. “unprecedented since the U.S. began the air campaign in Pakistan in 2004.” (By contrast, in 2008, there were just 34 strikes.) Both Roggio and the New America Foundation have found that the overwhelming majority of this year’s strikes have clustered in North Waziristan: at least 99. About one-third of those operations were directed against the Haqqani network, a senior NATO official said.

That torrid pace of attacks should make it beyond debate that the drones are the long pole in the U.S.’s counter terrorism tent, even if the drone program is technically a secret. So called extremists have their equalizer "the IED" ours is the drone. The Pakistanis haven’t sent their Army into North Waziristan so it is up to our drones like it or not. While most Pakistanis remain ignorant of the strikes, those in the tribal areas live literally in their shadow, and register enormous discontent, approving of retaliatory attacks on U.S. forces.

A United Nations report urged Obama to rein in the drones, restricting them to attacks on the senior most militants. He did the opposite. Most are against the drones but I am not as long as civilian harm is minimized or preferably negated. The new area we have been in is supposed to be used by militants only. I have to believe we are starting to hit the top of Al Qaeda and the Taliban where some in the ISI have strong bonds.

Anyway don’t expect Obama to heed that warning in 2011 either.Knowing our many discussions of late as to the ties between the Taliban, the Haqqani's, and elements in the ISI I am very concerned to find out they are in fact keeping elements who want to kill the Haqqani's from doing so and being so open about it so I thought we better discuss the ISI and the Haqqani's once again. These developments are not good! This really bothers me. I am not going to elaborate on the vile nature of Pakistan actively working against anti Taliban factions. That will be denied but it is fact!

I understand Mullah Omar is under control by elements of Pakistan's ISI and not allowed to roam too far. High level Taliban commanders are also being flown by NATO to Kabul in at least one instance and driven from Pakistan by NATO escort to Kabul to have these secret meetings with Hamid Karzai. They are so secret that mid level commanders deny these meetings are happening and vow to fight on period!

As you know, the US is increasingly taking matters into its own hands inside Pakistan. The Haqqani's network and their increasingly foreign fighters have become the main focus after 9 years of fighting. The Haqqani's Network's North Waziristan leadership -- usually called the Miram Shah Shura consists of a number of Haqqani's family members and closely associated long-serving commanders.

At the top of the network is Sirajuddin Haqqani's, who oversees the group's political and military activities and is the main liaison to the Mullah Muhammad Omar led Quetta Shura Taliban, the Taliban's leadership body (named for the capital of Pakistan's Baluchistan province). He is also one of the network's liaisons to Pakistani Taliban figures and al-Qaeda.

He travels or should I say "did" regularly into Afghanistan to coordinate with field commanders and occasionally to Peshawar and South Waziristan to connect with militants there. Remember Bowe Bergdhal? There are many field commanders in Afghanistan, but turnover is high because many get killed or captured. The most prominent is Mullah Sangin, who is believed to be holding Pfc. Bowe Bergdahl a captured U.S. soldier and Zakim Shah the movement's shadow governor of Khost province.

Jalaluddin Haqqani legendary leader who fought the Soviets and his son, Sirajuddin who directs operations are increasingly the targets of drones and now manned NATO aircraft in Pakistan as the Pakistani's have been leery to go in the area for whatever reason. Many are being killed, I heard over 80 in a week with no civilian casualties.

I wish we would quickly kill the Haqqani's, both Jalaluddin and Sirajuddin and leave the rest to Pakistan. We are getting closer hitting a nerve and I can finally see success if Pakistan and the ISI cooperate. We have been taking down one key leader after the next for the last 6 months but with their rate of regeneration this is just beginning and we can not relent now nor think any form of victory is at hand. I wish we would get out and leave the rest up to Afghanistan and Pakistan, keep an aye on events, and see what they do from here on in. Our job as a ground force is done if we are smart enough to leave starting this year like we said we would.

This whole mess is very similar to the war on drugs. Yes, we can target and kill leaders, but that changes nothing. Others take their place, and more hatred of the US results from it when innocents die.

They will always be there. This is no longer about the defense of America. It is militarism for its own sake. We are only bankrupting our future by remaining.

Just saw this article on private spooks for profit:

No good can come from this.

Funny Dave I was thinking the exact same thing. There are no military solutions to the problems there. And we will never be able to negotiate a settlement as long as we are seen as the outsiders. This is the reason why torture doesn't work.

Dave I really don't understand why we are still there other than to have a few benefit from war mongering. Declare success and get the hell out!

Dave Clarridge can forget about digging up dirt on Wali or any Karzai'a, we know how dirty they are and no one cares!

Demeur I just wish they would stay quiet long enough to let us leave by 2014 or sooner then they can have their civil war too.

Hello friend
How are you Today Visit your Web Blog Page Got more Information you share Best Information my pray with you and Your Business get more success and Blessings in The name of LORD.
thai lottery
thailand lottery tips
lottery tips
pakistan bonds
lottery