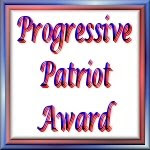 What is a Progressive Patriot? In Civil Disobedience, Henry David Thoreau wrote the following:
The mass of men serve the state thus, not as men mainly, but as machines, with their bodies. They are the standing army, and the militia, jailers, constables, posse comitatus, etc. In most cases there is no free exercise whatever of the judgement or of the moral sense; but they put themselves on a level with wood and earth and stones; and wooden men can perhaps be manufactured that will serve the purpose as well. Such command no more respect than men of straw or a lump of dirt. They have the same sort of worth only as horses and dogs. Yet such as these even are commonly esteemed good citizens. Others -- as most legislators, politicians, lawyers, ministers, and office-holders -- serve the state chiefly with their heads; and, as the rarely make any moral distinctions, they are as likely to serve the devil, without intending it, as God. A very few -- as heroes, patriots, martyrs, reformers in the great sense, and men -- serve the state with their consciences also, and so necessarily resist it for the most part; and they are commonly treated as enemies by it.
So, progressive patriots are who serves the state with their consciences.
Politics Plus introduced the Progressive Patriot Award to honor bloggers with the courage to stand up and oppose those in power when they abuse that power to the detriment of the people and fight for progressive ideals, such as human rights, tolerance, non-aggression, freedom and equity. If you receive this award from me or another blogger, please do the following to accept it. Display the award graphic of your choice (or both) proudly in your sidebar. Copy this paragraph (more, if you wish) into a post on your blog. In that post, pass the award on to a minimum of three and a maximum of five deserving bloggers. If you receive the award from another blogger, reply to this message HERE with a comment including the name and URL of your blog and the identity and date of the blogger who awarded it to you. You will then be added to a special blogroll of Progressive Patriots.

*I was recommended for this award by it's AuthorTomCat which I first declined because my goal is to make a difference period. Any effort that gets in the way of that is not for me. After being walked through what to do by Tom I figured like it or not we are a community and those that are unique and make a difference must be recognized and know they are a valuable part of the whole! To that end whether they partake or hot my nominees are:
Anok

Dusty
Polishifter
I limit myself as to those I converse with only because I want and try to hold daily dialogs with those I link to and my time is a lot more limited than their wide knowledge and spectrum of interest. I leave you to make your own evaluation but these sites represent our efforts full circle and deserve my accolades! I only wish I could have picked everyone on my Blog roll!
Posted by jmsjoin at 10:00 AM

Jim, did you watch 60 minutes?

1) Ray Gun! Pentagon's new weapon. tested on protesters. They are so DUMB these idiots that even their staged trial run had protesters carrying signs of "PEACE" being shot at with this electromagnetic weapon.

I see this in anti-riot operations IN America.

DO YOU KNOW WHAT KIND OF ENEMIES THIS IS MAKING THE US?

I am simply disgusted!

congrats!! you deserve it!!

naj
No I missed that! I have been a bit busy but I have heard about it in the past. I will delve into it though so thanks!
When it boils down to it we the decent citizens of America are the enemy here. That is increasingly becoming obvious to some but not enough to make a difference.
I tried to tell people years ago but people thought I was crazy because Bush denies this too and that is even though we do not like it, want it, or agree with it, war with "radical" Islam is the goal.
Those and everyone around the world that does not bend to the will of Bush the Decider is his enemy!

Thanks Betmo!
Coming from TC it means something to me though I am reluctant to do these things because my goal is to analyze and get out the truth and all my time and energy goes towards that end.
Making a difference is my goal and will be my reward. Stay tuned!

And likewise to tomcat for initiating the kind gesture.

There's nothing wrong with accepting a pat on the back and a little admiration from your peers. After all, in these dark times, all we have is each other, to share the light of truth and spirit of freedom.

I am grateful to all the good people we are fortunate enough to have in sharing our mutual feelings and thoughts, and the information we all need.

May there be more of us than we can imagine.

Dave
You know, coming from Tom this means something. He tried to help me get the award on my side bare but like all the rest I just have to forget it for now until someone can fix this mess. He really tried but I have something wrong with my template.
I am very much a loner who does not require or want accolades but I am learning. TC made me realize we have to stick together and take care of each other. Together we will do this!
Larry I thank you. You were a subject of our conversation and are truly deserving of recognition yourself!

Jim, you are all the more deserving because it is not that important to you.

tc
you know what you and my other peers think is important to me. I hope you got those I recommended as they are deserving. I don't want to offend anyone as everyone I converse with is on the ball one way or the other.

Thanks Jim! I will gladly display this badge on my blog! Hehee...I'm all a blush!

And YOU my friend, deserve it!

Once I figure out who to nominate, I'll put the post up. But for now I have it on my sidebar - it looks good! *grin*.

Now, if everyone could please go to blogger's choice awards and vote....hehehehe I'm kidding, I'm honored to have this badge!

Anok
You are what this is all about and you are truly a progressive patriot. You know, i have none in my side bar and hopefully Brother will be able to help me fix my vast problem's but this one coming from tc means and awful lot. More than all the rest! He tried to help me too but I have a hybrid of problems. Take care!