I talk often about Bush's Politics of Division to get what he wants it just dawned on me with todays meeting that he's doing it to the middle east! 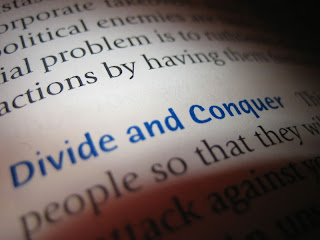 Divide and Conquer: I talk often about Bush's Politics of Division to get what he wants in the US, his middle east efforts at division to get what he wants just dawned on me!
Bush the Destroyer: I talk often about Bush's use of Rove taught 3D Politics ( divisive, deceptive, deceitful, Politics) to achieve his goals. You know in the U.S that is new societal order and in the middle east he wants to create a new middle east order. Trying to achieve these will provide the impetus to pursue his desired new world order.
We have been saying for quite a while that Bush has sped up the fall of the United States. It was headed the way of the Roman Empire but Bush sped up the process. I have also said many times that Bush is following the 19th century Russian Doctrine of Destruction and must create disorder before he can come to the rescue with his new order. I keep asking and still get no answer but why can't people see this and televise it and get it heard?

Anyway two things just occurred that really highlight his negative influence to the US and what he is doing to the middle east, and how what Israel and Palestine think will be success with Bush being the judge, will end up in total disorder around the world and per the doctrine he is following, enable him to so he thinks, implement his new world order.
We talk often of how Bush has purposely left the Border open, allowed illegal immigration to fuel his new societal order, has been widening the gap between the haves and the have not's, was destroying our America to replace it with his version, and like everything else he does, end in total chaos.

With that said I must say I do not like or agree with Pat Buchanan and he is dead wrong as to why America is Decomposing, coming apart. it is all Bush's doing but here are a few highlights of what he said and I ask you to please read the rest of this interview with the ignorant Hannity!
PAT BUCHANAN, AUTHOR, "DAY OF RECKONING"/CONSERVATIVE COMMENTATOR: Yeah, this would have been my time. It's a little past it for me but my ideas are out there. HANNITY: Look, I've said this to you many times. We're friends. Pat Buchanan is often ahead of his time. You were way ahead of your time on immigration in the debate in this country. Here's what you say in the book, and it scares me because a lot of — having read the book now, I'm afraid this may be true.
"America is coming apart. Decomposing. And the likelihood of her survival as one nation is improbable and impossible if America continues on its current course." Pat Buchanan, that's a scary scenario for all of us who love this country. BUCHANAN: It is. But take a look at the unity we had, say in the 1950s and early 1960s. What have we gone through? You had a cultural war that's divided us completely on matters of morality. You've got a wholesale invasion, the greatest invasion in human history, coming across your southern border, changing the composition and character of your country. You've got the melting pot that once welded us all together, which has broken down.
All of these things are happening, Sean, and frankly we've got have the kind of solid, firm, national leadership you need to deal with this crisis. HANNITY: You say we're on a path of national suicide. I want to ask this question directly because you say it's a day of reckoning. Do you really believe that America, the country we all love as we know it, is in jeopardy of existing? please read the rest I believe it
Buchanan is way off as to why this is happening and I advise you to ignore his and Hannity's ignorance after the conversation on America's demise. Bush the destroyer has purposely created division where there was none so he could use it for his Political gain and implement his new order out of his created disorder. Listening to the interview this morning at Annapolis I realized he is doing the same thing in the middle east to get what he wants there.
Look at this and think about the big picture in the middle east.
Bush: "We meet to lay the foundation for the establishment of a new nation -- a democratic Palestinian state that will live side by side with Israel in peace and security. "We meet to help bring an end to the violence that has been the true enemy of the aspirations of both the Israelis and Palestinians. We're off to a strong start."
Abbas: "I would ... like to speak to the citizens of Israel on this exceptional occasion to tell them: Our neighbors on this small piece of land, neither you nor we are begging for peace from one another. Peace is a common interest of yours and ours. Peace and freedom are our rights just as peace and security are your rights and ours. It is time that the cycle of bloodshed, violence and occupation end." "The exceptional opportunity that the Arab, Islamic and international presence brings today coupled with overwhelming Palestinian and Israeli public opinion in support of Annapolis, must be seized in order to be a launching pad for a negotiations process."
Olmert: "I have no doubt that the reality created in our region in 1967 will change significantly. While this will be an extremely difficult process for many of us, it is nevertheless inevitable. I know it. Many of my people know it. We are ready for it." "We want peace. We demand an end to terror, incitement and hatred. We are willing to make a painful compromise, rife with risks in order to realize these aspirations." "There is no Muslim state with which we do not want to establish diplomatic relations. Anyone who wants peace with us, we say to them, from the bottom of our hearts, 'Ahalan Wa'Sahlan' (Welcome)." Quotes from Annapolis
** It was obvious to me that Abbas and Olmert sincerely want Peace but they are overlooking two very important things that will blow up in their faces. They may in the end have Peace temporarily between the two Nations. However, they forget Bush may want their two countries peacefully sided by side but
1. He practices the Politics of division to create disorder to get what he wants and replace it with his version of new order. And
2. Iran's leaders amongst others do not want bush's new order they want theirs and will fight to the end to get it. When all is said and done the entire middle east will be embroiled because of Bush and when the rest of the world steps in to help Iran Bush will get his reason to take on the world and replace the disorder he created with his version of new world order or so he thinks.
James Joiner
Gardner Ma
www.anaveragepatriot.com
Posted by jmsjoin at 12:58 PM