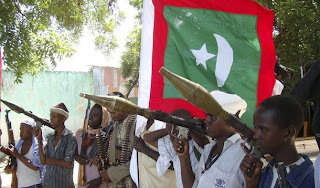 You may remember Somalia has a new militia faction that is about the only group in the country to go against the al-Shabab and win. The Ahlu Sunnah Wal Jama - followers of Sufism or mystical Islam - are mostly volunteering students who say they have no political ambitions beyond expelling al-Shabab from the capital, one district at a time. Time to put them in overdrive as you will agree.

Al Shabab is the enemy of the people. Al Shabab not famine is responsible for Somalian genocide: Somalia is in the midst of a famine, suffering from the worst drought in 60 years. 29,000 Somali children have died within the past three months, and 100,000 Somalis are expected to die in the next few weeks. The al-Qaeda affiliate al-Shabab has destroyed the country, taking over much of the southern part of the country where it has imposed a strict version of Sharia law.

We discussed Al Shabab's splintering and what it meant. It is coming true! Government troops said they did not care why Al Shabab pulled out of Mogadishu? Al Shabab has fought hard and strong there for their gains even amongst other rebel groups. They did not just pull out for the UN and the starving people. The Government is now occupying Al Shabab bases and touting it as a victory. They better be very concerned. Remember it is easier to attack than to defend. Well, now they are going to raise hell with the Government but it is time to put Ahlu Sunnah Wal Jama into overdrive.

Al Shabab in Somalia and Al Qaeda in Yemen are both reinforced by those fleeing the fight in Iraq, Pakistan, and Afghanistan. Somalia is a failed State and Yemen is rapidly headed towards being a failed State. They are perfect havens for Al Qaeda to set up new training camps in lawless regions.

Yemeni Al Qaeda previously sent arms and help to Al Shabab in their fight in Somalia. Al Shabab is reciprocating sending fighters to Yemen to help Yemeni Al Qaeda. Supposedly the so called experts say the three forces operating to destabilize Yemen from the North, South, and East will not join forces but you bet they will! Al Qaeda has been leaving Iraq, Afghanistan, and Mauritania; to use Yemen as their new base we in turn better meet them there with some kind of force. This entire so called terrorism war is barely beginning. This is not a war to end all wars but the war of all wars!

Be very concerned about what is happening in Yemen, Somalia, and the Gulf of Aden, the new front in the so called war on terror! Remember, it is better to attack than defend and Al Shabab can now go back on the attack in Mogadishu but knowing they did great damage to their reputation by starving Somali women and children a betting man would believe they left a skeleton crew in Somalia and the bulk are headed to Yemen to join the fight. I would be watching the Gulf of Aden and other countries where they may be going to get to Yemen. It is time to go into overdrive and get really tough!

Hey Jim ... coincidentally this was weird reading because a few year's back I done a posting on Somalia and the future threat it may pose, as well as group's like the Nigers emancipation front (something or another) ... basically I was suspecting to get alot of sabotage of western petro type corporation's out of them mostly, pipeline's etc ... and thought at the time "rightfully so" Why? ... because in my opinion Jim ... we have been muscleing into these countries either through us or affiliate's and indirectly pushing some of this poverty and corruption ourselves, this is what I personally believe Jim, I was and am so sick and tired of our occupation's in these nation's and especially, I actually believe if us and our allies didnt have so much occupation and influenece in these place's we would not be in half the bloody mess were in. Now I know many will say this dont have a thing to do with us, but I believe we influence and instigate and feed fire's all over the world behind the scene's as well.

BTW Jim ... I just left a coment as well on your previous 10/ 12/ 11 posting about "Afghans Stage Anti- Pak Protests" and your coment on there influenced it as far as this shit going on with Iran right now, so this is a tad off topic for this post but I wanted to mention it if I may here. When I was reading about this Iran terror/ assassination stuff the other day (because it had a Texas connection is why) I started wondering if it's ligit, or did our government in some way try to influenece this ... Look Guy ... I hate to take side's with Iran for sure, however ... I have alot of question's when I read and view issue's, I just am not in the habit of blindly taking everything as the "Gospel Truth". I better shut the Hell up.

Anywayz Jim. hope all is well with you and your's and your enjoying this fall season ... weather here has been just beautiful, and we finally got pouring rain's for a couple dayz straight after such a long dry spell, if anything beside's being we needed more rain, it at least clean's the smog out ... we had the same problem when I lived in Los Angeles too.

HI RC! I'll never forget black hawk down. I have great respect for Al Shabab but they have met their match and I have more hope this time.

We are living a total lie today and sadly this only a small part of it. This so called joke called an assassination attempt by Iran's IRG using Mexican drug cartel's on US soil does not fit Iran's M.O. This charade however does fit ours as we look once again for a way to create a war while making ourselves appear to be the innocent victim. We have long been prepared to attack Iran from the gulf and only lacked the excuse. We may have it now! 4 1/2 years ago we had 5 aircraft carriers in the Gulf and I said war with Iran is coming There are no surprises here only that most do not see the totally controlled lie thy are living today!

As far as your last comment Jim on Iran, that's exactly what the Hell I was wondering myself!