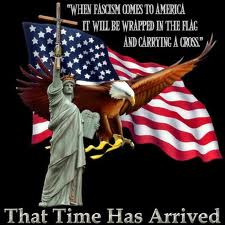 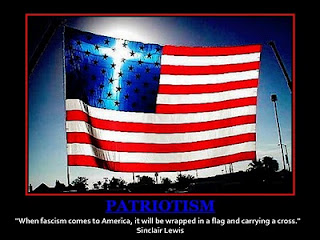 I feel we must repost this as, of late we have been losing more rights and the state has been increasingly gaining more control of us. There are those that mention a police state, nationalism, fascism, and those that feel we are stretching it a bit. It is a fact and it did not start with Obama but 100% with Bush and Cheney. Obama has not let powers go as he said he would but has been expounding on them instead.

"We've slipped away from a true Republic," Paul said. "Now we're slipping into a fascist system where it's a combination of government and big business and authoritarian rule and the suppression of the individual rights of each and every American citizen."

It really irks me that Republicans started as a result of Rove, Cheney and Bush to accuse Democrats of doing what they themselves are doing. It really peeves me that it is still continuing successfully because it goes unchecked. Remember too that it was Chief Justice Roberts a Republican who gave our Nation to corporations stupidly saying they are people too and can give as much money as they want to control what they want. That finished our Democracy off and short of full armed Revolution I see no turning it around. It is time to replace Capitalism with Democracy!

The Transformation of the American Conservative Movement into Fascism, It is not a transformation but a proven fact!
Obama is in part continuing Bush's Fascist agenda only kinder and gentler!

Max Blumenthal’s book, Republican Gomorrah was interesting, had some good points but yes thinks are getting worse with the tea partiers and the complicit Republican party this is not a transformation, under Bush it became proven, demonstrated, undeniable fact. Odd or not Obama is pretty darn close to the new American Fascist party! The Transformation of the American Conservative Movement into Fascism

I keep hearing how Obama has us on the road to Fascism. Not in every instance but he is largely traveling on the road Bush paved. Look what we were saying under Bush! This was a common theme of mine with Bush. Not only the 14 threads of Fascism but look at the 10 steps to end a Democracy. It is a quick one and I illustrate us! They blame everything on Obama too! Fascism under Bush

Now I want to relist the 10 steps listed to end a Democracy as they pertain to us and you will agree.

1. Invoke a terrifying internal and external enemy. The enemy is us! After 9/11 the Patriot act was passed, fear constantly pressed on us and Bush started his power grab.
2. Create a gulag . Once you have got everyone scared, the next step is to create a prison system outside the rule of law, FEMA Concentration camps!
3. Develop a thug caste: Private security even at times various Governmental agencies. The police get wore and worse!
4. Set up an internal surveillance system You know this one strikes home!
5. Harass citizens' groups
6. Engage in arbitrary detention and release
7. Target key individuals: Threaten civil servants
8. Control the press
9. Dissent equals treason: We know only Bushco could commit treason as they set up their new America
10. Suspend the rule of law: The John Warner Defense Authorization Act of 2007 gave the president new powers over the national guard. He can now send New York's national guard against another State if "He" deems necessary!

Remember the 14 common threads of Fascism: keep the entire world in mind but particularly how everyone of them applies in America today, more so under Bush I think. This is scary!

* 2. Disdain for the importance of human rights. Bingo!

* 3. Identification of enemies/scapegoats as a unifying cause. Bingo!

* 4. The supremacy of the military/avid militarism. Bingo!

* 11. Disdain and suppression of intellectuals and the arts. Bingo! (at the link read how it does apply)

* 12. Obsession with crime and punishment. Bingo!

* Now what do you think and believe?

Somewhere in the last 50 years corporations slowly boiled the frog. At some point they realized that they could control the very people making the laws that governed them. So now we have a very sick relationship that serves only a few. Eventually though they will be fighting each other. That's the nature of survival of the fittest. Unfortunately us little people are in the middle. Maybe the "end times" are here only it's not caused by some heavenly force but by our own stupidity and greed.

Prepare for worse times ahead because they haven't fixed the problems and this great house of cards is about to fall. You can't saddle entire nations with the debt of a few and expect good things to magically happen.

You know Demeur, that group of writer's I belong to think we can fix it. No way in hell! Democracy should control corporations but now corporations control our Democracy, made official by Robers and the unsupreme court. There is no way in hell they will ever relinquish control.

Here we come Libya again! UN sees need for more Syria observers, aircraft: A United Nations mission to oversee an end to violence in Syria may need to bring in its own aircraft and deploy more troops to ensure that a firm ceasefire takes hold throughout the country, U.N. Secretary General Ban Ki-moon said on Tuesday.

A six-day-old truce has held in some parts of Syria since President Bashar al-Assad pledged to enforce it last week. But in strong opposition areas such as Homs, Hama, Idlib and Deraa the army continues to attack and battle rebels, using heavy weapons in violation of the pledge by Damascus to pull back.