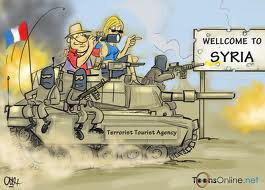 Syrian troops shell central city of Homs: Syrian troops shelled a rebel-held neighborhood and sent reinforcements to border areas as the opposition called for fresh protests Friday after the United Nations accused Syrian President Bashar Assad of failing to honor a peace plan that went into effect a week ago.
The latest violence came hours after Western and Arab diplomats from the "Friends of Syria" group met in Paris.

At the meeting Thursday, U.S. Secretary of State Hillary Rodham Clinton called for the U.N. Security Council to adopt an arms embargo and other tough measures against Syria. An amateur video posted online by activists showed at least two of the observers, including the team's head, Col. Ahmed Himiche, standing outside a U.N. vehicle Thursday as dozens chanted, "Death is better than humiliation!" and "The people want to topple the regime!"

French top diplomat says world must prepare for failure of Syria peace plan: Juppe says France would support a U.S.-backed proposal for a U.N. arms embargo and other tough measures against Syria. He says this peace plan is “the last chance before civil war. ... We don’t have the right to wait.” Juppe hosted U.S. Secretary of State Hillary Rodham Clinton and other diplomats in Paris on Thursday to try to work out options for Syria. The U.N. chief accused Syrian President Bashar Assad of failing to honor a peace plan that went into effect a week ago.

How do you think that will go? Do you think Russia Syria's top arms supplier will allow her supply ships stopped? This has not even started yet I am sorry to say for those people. The US is the enemy the poor syrians are the tool.

Containing Syria's chemical weapons: Little-noticed amid the fighting and attempted cease-fire in Syria are the stockpiles of chemical weapons. The US and others are trying to check their use or theft. Russia also needs to pressure Assad into ensuring they are safely stored.

Unlike Iran’s mere potential to build a nuclear weapon or North Korea’s underground testing of nuclear devices, Syria’s chemical weapons are ready for action – and right in the middle of a uncertain civil war. “The country is a chemical powder keg ready to explode,”

Europe, Russia propose rival resolutions on Syria: European nations and Russia proposed rival U.N. resolutions Friday, both calling for expanding the number of U.N. cease-fire monitors in Syria from 30 to 300 but disagreeing on possible sanctions and on how quickly the larger observer force should get on the ground.

The European draft stresses that it is critically important to create "a sustained cessation of violence" and establish "a conducive environment" for the large mission to deploy. The draft proposed by Russia, Syria's closest ally, would immediately establish the 300-strong force without any conditions. Russia wants them to be able to slaughter right up to the last second.

You have heard this here before but forget any thoughts of a peace deal working. Assad calls the protesters and peace workers terrorists and promises to stamp them out. This has barely begun!

In closing: You know Putin just got himself reelected as President, he did this so he could be at the helm of Russia as he like me knows 100% that world war is our future. He plans on marshaling China who is rapidly building a more formidable military and whoever he can to take on US hegemony. Russia watched helplessly as we had our way in Libya. Putin blames what is happening in Syria on our interference and Libya for training the protesters to fight against Bashar Al-Assad.Russia and Iran will not let this be another Libya but?