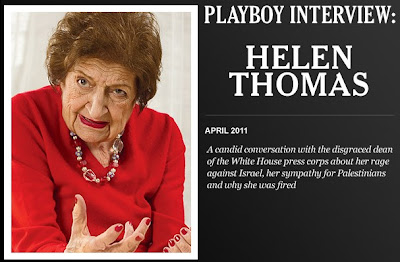 Oren, responding to a Sunday ceremony in which Thomas was marked for her support of the "Palestinian position, said he "was appalled by the award ceremony given by the PLO delegation in Washington to Helen Thomas, who has been completely shunned by all decent Americans after making anti-Semitic remarks, along with teaching Palestinian children to hate the Jewish State and to glorify suicide bombers."

I have to say that I am far from anti Semite growing up in the US with Jewish friends and some best friends being Jewish but I happen to have agreed with what Helen said that led to her falling out. Let me refresh your memory.

Helen Thomas, Dean of the White House press corp. called a Bigot for saying Jews should get the hell out of Palestine, is she right?

Israel was created in 1948, after UN Resolution 181 partitioned the territory of the British Mandate for Palestine into two states for Jews and Palestinian Arabs. At the time, there were approximately 1.2 million Arabs and 650,000 Jews in all of Palestine. The Arabs objected to the creation of the Jewish state and fought a war against it. The Arab side lost the war, and the Palestinian state never really came into being. The territory allotted to the Palestinian state by the UN partition resolution was taken over by Israel and Jordan. About 780, 000 Palestinians became refugees, many of them living in the Gaza strip as well as in the West Bank. Background and map of Palestine

A video surfaced where Helen Thomas is asked, at of all things the White House Jewish Heritage Celebration on May 27th 2010, "any comments on Israel." Helen Thomas said "Tell them to get the hell out of Palestine. Remember, these people are occupied and it's their land. Not Germany. Not Poland." When the questioner, who knew he's caught a live one, asked where Jews should go, Thomas didn't miss a beat, saying "They go home, Poland, Germany, and America' and everywhere else." Helen Thomas says Jews should get out of Palestine Well? Israel wants the truth hidden and we will let them!

You know, there is so much in what she said, the original agreement, our guilt in this conflict that will never end peacefully, what Ahmadinejad said a year ago... You know, first reading how Israel and Palestine was allotted their territories in 1948 I do not condone that Israel has not been forced to adhere to that resolution. We, the US Britain and Europe especially are as guilty as Israel for not insisting Israel adhere to UN Resolution 181.


You know I say often that we are Israel's lap dog, her pit Bull that will do the fighting for her when she gets in trouble. Israel I came to realize is the worlds chief warmonger and the US the enforcer. It became obvious that coming to Israel's rescue would be how the US has the excuse to go after Iran.

I can not stand the fascist Ahmadinejad and his senseless antagonism nor his unrelenting desire to obliterate Israel. That said, I have to agree with something he said a year ago and Helen Thomas just said and apologized for. The Israel, Palestinian, Iran, Syria, Middle East issue will never be resolved peacefully Knowing that I have to agree with Ahmadinejad when he said if the US and Europe felt so bad for what happened to the Jews during WW2 then they should have given them part of their country.


* In closing Helen Thomas said "Tell them (israel) to get the hell out of Palestine. Remember, these people are occupied and it's their land, not Germany, not Poland. When the questioner asked where Jews should go, Thomas didn't miss a beat, saying "They go home, Poland, Germany, and America' and everywhere else."

Well that may be true but it will never happen of course and Ahmadinejad may be right in that one issue but the best we could hope for is an adherence to UN resolution 181. That will never happen either and all I can see is a total Middle East breakdown that Bush guaranteed when he attacked Iraq to help Israel set up their buffer zone.

Oh how I miss Helen and her great questions during press conferences however seeing as how corporations have taken over the press her time has passed. When Fox News can get a spot in the crowd you know anything close to objective is over.

Yeah I liked her too and I happen to agree with her and Ahmadinejad on the Israel question. Did you see the mole who was uncovering Faux's hijinks?

Only caught a blurb about that guy. I'm hoping that the investigation by the Brits into Rupert Murdock will bring them down.