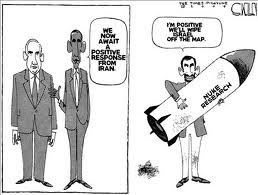 Take the World Can't Wait Test on Iran
The Test:
1. The possibility of war with Iran:
a) is a good thing
b) never gonna happen – it’d be too crazy
c) will be prevented through sanctions on Iran
d) a real and present danger that could widen the current war in Afghanistan and further inflame the whole region

2. What country in the Middle East refuses to officially confirm or deny that it has a nuclear weapon program and refuses to sign the Nuclear Non-Proliferation Treaty?

3. Iran has agreed to be monitored by the IAEA and opened up its country to IAEA inspectors.
Yes or No?

Answers.
Depends on what you want for a future.
Israel
Yes
U.S.
U.S.
c, 1.2 million
Follow up Question!
D, 5,000
It is sickeningly obvious that the world can't wait! Just a question, how did you do on the test? I got 3 wrong and was a bit surprised as I thought I was well versed.