Bashar al-assad must leave Syria Dead or alive now or the carnage will continue! 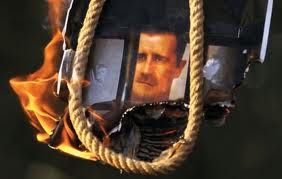 Syrian rebels target security officials in capital: Rebels seeking to topple Syrian President Bashar Assad killed three regime officers in separate attacks Tuesday around Damascus, activists and state media said, the latest violence targeting the security forces used by the government to quash dissent.
A bomb hidden in an army truck also exploded in the capital, wounding several people. The persistent bloodshed has tarnished efforts by a U.N. team of observers to bolster a truce that the international community sees as the last-chance to prevent the country from falling into civil war.

Marzouki told the pan-Arab Al-Hayat newspaper Tuesday that Assad's international allies, "the Russians, Chinese and Iranians, must understand this man is finished and...persuade him to leave power." Addressing the Syrian leader directly, he said "it is better for you and your family to leave alive, because if you decide to leave dead, that means that you have caused the deaths of tens of thousands of innocents."

Reports of carnage and widespread violence in Syria continue to grow despite the U.N. Security Council's agreement to boost the number of monitors in the country.A huge explosion rocked central Damascus on Tuesday, according to the opposition Syrian Observatory for Human Rights. The group had no immediate information on possible casualties.

On the opposition side, at least 11 people were killed in Syria Tuesday, including two who died as a result of torture, according to the opposition Local Coordination Committees of Syria. Two of the dead are women, the LCC said.

Assad is not going to leave. Assad calls the protesters and peace workers terrorists and promises to stamp them out. This has barely begun!

In closing: You know Putin just got himself reelected as President, he did this so he could be at the helm of Russia as he like me knows 100% that world war is our future. He plans on marshaling China who is rapidly building a more formidable military and whoever he can to take on US hegemony. Russia watched helplessly as we had our way in Libya. Putin blames what is happening in Syria on our interference and Libya for training the protesters to fight against Bashar Al-Assad. Russia and Iran will not let this be another Libya but?

I still think it's an economic war we should be worried about. Little has changed since our economic meltdown on a world scale. Something has to give sooner than later. Greece I believe is set to default and last night I hear Italy will follow.
Even if Assad leaves the country is not in great economic shape and armies have to be fed too. Russia and Iran may win in Syria but what will that be with a country in shambles? They have after all bombed Homs for 4 straight months. As for the carnage it never stopped even with observers.

You know, Russia and China has facilitated this slaughter, Russia even supplying the arms and ammunition.

The fools still hope for a peaceful resolution and that they can keep their sub Base in Tatar. Russia without Assad is wanted like the plague.

They and China can kiss any interests there good bye unless they keep the Alawite's in power. Interesting scheme here!

Oh yeah there's this too!
France raises prospect of military action in Syria: French Foreign Minister Alain Juppe said France had discussed invoking Chapter 7 of the U.N. Charter, which can be enforced militarily, with other world powers. U.S. Secretary of State Hillary Clinton said last week the United Nations should move toward such a step to allow for measures like travel and financial sanctions and an arms embargo. She didn't mention military action. The U.S. has for more than a year opposed the further militarization of the situation.
Any such move, however, would likely be blocked by Russia and China, which have twice used their vetoes as permanent Council members to protect Syria from condemnation and remain opposed to military intervention. Western powers, too, don't appear interested in sending forces to another Middle East nation in turmoil.

Problem with Chapter 7 is that there is no reference to civil conflicts. It refers only to one UN member country fighting another. And the core value here being the sovereignty of a nation.