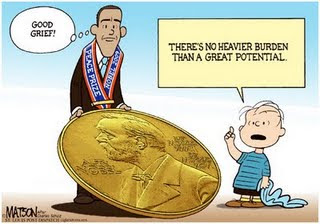 Comparing himself to the likes of Mahatma Gandhi and martin Luther King whose league he admits he is not in, Obama who is fighting two wars and just announced adding 30,000 troops to Afghanistan was speaking to a peace crowd in Oslo and he handled it masterfully.

He made a case for war while accepting the Nobel “peace” prize and it seemed to go over well. Only Obama could have pulled that off! President Obama for what it is worth announced he will continue to work with President Medvedev to reduce nuclear weapons, he heralded the fact that millions have been lifted from poverty though I do not see how in this environment, and announced he is seeking a better world for our children. Obama accepts Nobel peace prize

Obama said no Holy War is justified but a war to end it is and is morally justified and a war for peace! America has never fought a war against a Democracy! Obama did a better speech in Oslo than he did at West Point when he announced he was adding 30,000 troops.

In listening to him explaining Americans have always spilled their blood for the good of the world and this was a just war I was thinking it was going to be hard for Republicans to beat this up. It is! Republicans have not said a peep other than “it’s about time” They could not fault his speech so they are concentrating on the fact that thanks to them he has accomplished nothing to date to deserve the prize.
US media on Obama's Nobel Peace Prize

His accomplishment is turning the world away from WW3 that Bush had us headed. Undoubtedly he can thank Bush and the mess he made out of US and world order for being awarded the Nobel Peace prize. I am sick of hearing he has accomplished nothing and it is too early. BS! The entire world feels hope with the exception of the Republicans who want him to fail at every time. They are angry!

I think that is fantastic not because of his accomplishments but because of his efforts to unite the world. It is a bit ironic for the President of a country fighting two wars to win the peace prize.

However if he can bring peace to the Middle East and bring Afghanistan to a successful conclusion this award will be a fitting tribute and a message to the entire world to cooperate with Obama. This is big! Peace prizes for hope not accomplishments, man are we desperate!

Now let's see what the world does with the foundation President Obama has laid! We lost any hope for the future because of Bush's war mongering and the world unifying to take the US on! The entire world now sees hope for the future once again. There may be peace yet! I have been listening to people laughing about Obama getting the prize saying he did nothing! It was mentioned that Reagan should have gotten it. Hell Reagan started the mess with his over spending and war mongering that Bush was following. Obama is the shining knight the entire world has been waiting for.

He gives us all hope for peace! Regardless of Politics we should all be proud of Obama as our leader getting one for the team for a change instead of taking one! Obama has already changed the direction os the US and the world. Under Bush in our future the entire world saw nothing but death destruction and WW3. Obama has set us on the course to world peace. It is up to th entire world which road they choose.

Nostradamus gave us two roads to take into the future. Bush had us on the wrong road. The road to death destruction and a world shattering forever war. The entire world recognizes that under Obama he hit the cross roads and now has us on the right road, the road to a successful future or a chance of it. Obama has set the direction but it is up to the world which road we will travel. It is absolutely right that President Obama be recognized for the chance he has given us.

He is the right man at the right time to change and make History. It is up to all of us to take advantage of this opportunity let us not blow it! You know the awesome load he is carrying! He did this despite the Republicans hoping and working for his failure the whole way. They are the loudest in saying he is not worthy of the award but he is. Republicans are the big losers. They have failed again and proved as party leaders they are not worthy of calling themselves Americans'


James Joiner
Gardner, Ma
www.amaveragepatriot.com
Posted by jmsjoin at 5:00 AM

Nostradamus? Jim, you always amaze me with your resources. Interesting analogy of the 2 roads. Yeah, the Republicans kind of hit a wall with some just speechless and others saying Bush said it first. No, following this amazing politician, he's not saying anything different from what we read in The Audacity of Hope or his earlier writings in his autobiography. He is very much like his his mentor, Abraham Lincoln, who was met with the harshest criticism during a time of national schism. He's both visionary and a realist. Very much what the world is in need of from America at this moment. So grateful that Americans elected this man over Bush 2 and Barbie Doll.

I liked Obama the first time I heard him, he has more substance than eloquence and he has plenty of that. His speech in Oslo was superb, as you would expect, he was talking to the American people more than to the world, we are the ones that have to be convinced and a lot of republicans were, which makes me a little edgy. I was not happy with the proposed surge in Afghanistan because, if you get every since single Taliban and Al Qaeda, 1,000s more will pop up somewhere else and the forever war goes on. Somewhere, somehow there has to be a political solution. If he the man to find one? Probably more than any other.

Hi Vicki! Thanks, I've got a million of them! We can all be thankful for getting Obama in now if we can only get something past the Waterloo Republicans! That is an excellent cartoon isn't it!

Holte he is a speechifier! Now if he can only figure out Afghanistan. That will make or break him!