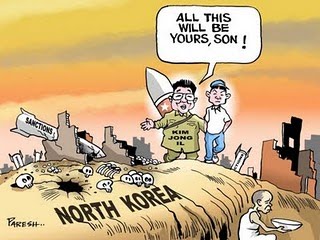 N. Korea warns region is on brink of war. North Korea warned Friday that U.S.-South Korean plans for military maneuvers put the peninsula on the brink of war, and appeared to launch its own artillery drills within sight of an island it showered with a deadly barrage this week.

China instigated this, remember they warned us? but they let it go too far as South Korea Rejects China Call for Talks as Naval Drills Begin


Now the truth comes out! China has long warned about our navy in the seas near their coast. Particularly as they flex their increasing military might in the region. They are arming and allowing North Korea to at least instigate a very dangerous war. They do not want millions of refugees flooding China and that is the least of it! China issues warning ahead of U.S.-SouthSEOUL (Reuters) - China warned on Friday against military acts near its coastline ahead of U.S.-South Korean naval exercises that North Korea, days after shelling a South Korean island, said risked pushing the region toward war.

The recent incident of North Korea firing on South Korea's island and civilians and killing 2 soldiers after a recent visit from the Kim's shows me China is pulling the strings and will not allow there to be peace between the Korea's. This might be just what China is instigating as Japan Calls For Attack On North Korea, Tensions Mount After Shelling and South Korea's military is on crisis status

A while ago I was hoping Kim Jong Il was paving the way for his son to take over and I still think so but am very concerned as to what that entails and China's real role here as her goal seems to be to keep Democracy off her doorstep and the Kim regime in power because they will remain a puppet whose strings China can pull.

Kim Jong Il said he was committed to establishing "a lasting peace system" on the Korean peninsula and to making it nuclear-free "through dialogue and negotiations" a lasting peace system, what is that? donations of food and supplies from us while he maintains his 7 million man army for China and continues to toy with advanced weapons and starve its people?

In the end I don't care what they say. This is a confrontation long in the works. MacArthur was right wanting to go right through North Korea then China back than because it would eventually have to be done. There is a lot behind the scenes to be concerned with here and yes China is our banker but they are over stepping their boundaries. We owe them trillions but with Russia's cooperation we can come out on top here. I fully expect we would and in the end being victors we would cancel our debt to China!

At least with uniforms we'll know who we're fighting. As for going after China we know that won't happen. Not with all the business we do with China.

Demeur I firmly believe China is behind all of this with North Korea regardless of what they say.

They are empowered,want to take what they want, and we are in their way.

They are the ones that originally threatened us over these routine exercises and remember father and son Kim just left there.

I am watching these exercises closely. If China did not pay North Korea to maintain its military and arsenal to keep Democracy at bay there would be no threat.

I forgot! Anyway if this ends up in a war with China Russia will cooperate with us and hopefully we will beat China and as victors negate our debt. They have as much to lose as us.

Please note: I firmly believe china has already fired a warning shot at the U.S. also as that thing off the coast of California was definitely a missile, government lies beside. Thanks to Clinton allowing them to buy missile guidance technology along with this President's Chamberlain like tendencies (Anti-American in my book) it stands to reason that China is getting exactly what it wants

Hi Joe welcome! You could be right they certainly have the capability and I thought of that. They have a nasty surprise for us. did you ever Google or hear about "assassins mace"? What about our HAARP? whoever awns space owns the future. There has been so much in this lie we live today!

China is not being smart... A sort of forward defence 1 mile from China. :-)

Hi Anna! I agree with you but I am afraid they could car less. Their goal is to use North Korea to keep Democracy from their front door and to enable them to dominate Asia and take what they want.

It is only ultimately going to lead to war. Hopefully Russia will side with us we will win and as victors eliminate our debt to China. That has to be the goal!

A friend just called and one of his sons is on the George Washington!

Best of luck to your son's friend, James... I don't believe that there will be a shooting war that will involve the George Washington. China will not like that, bad for business.

Anna I firmly believe this is all China's fault. They always remain silent as they arm and use north Korea as their guard dog to keep us off their front door.

They are the ones who first threatened us over these exercises and then the Kim's visited China. Oh yeah, they are raising hell in China and want us out. Bust that is not to be!

Now we have a Wiki Leak that says China will accept a unified Korea when Kim dies as long as the US is gone. Well I don't like those implications either.