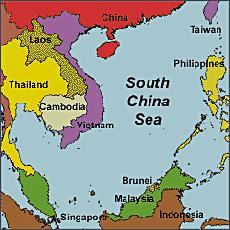 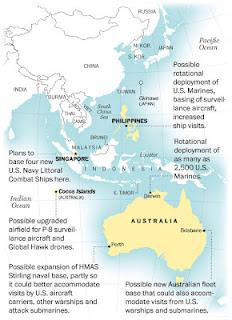 Now we know why China would not sign the SouthEast China sea accord! They planned on breaking the accord and dramatically ratcheting up tensions by setting up a Government over the disputed Islands and seas so they would have an excuse to intervene militarily.

China Approves City Council, Military Base in Disputed Islands: China says it has formed a municipal council for a newly established city in a disputed part of the South China Sea, and has authorized the deployment of a military base in the area. In a report published Sunday, China's official Xinhua news agency says 1,100 residents of several islands known in Chinese as Xisha, Zhongsha and Nansha have elected 45 deputies to a municipal people's congress. The islands are part of the new city called Sansha, and the council will be based on an island that China refers to as Yongxing, known in English as Woody Island.

Xinhua also says China's Central Military Commission has approved the formation of a Sansha garrison command responsible for “national defense” and “military operations.” The Chinese government declared the establishment of Sansha last month, saying its role is to administer the disputed Paracel and Spratly archipelagos and surrounding South China Sea waters, which are believed to hold oil and natural gas deposits. The islands are claimed in whole or in part by Brunei, China, Malaysia, the Philippines, Taiwan and Vietnam.

China dubs tiny island new city in sea claim bid: China's newest city is a tiny and remote island in the South China Sea, barely large enough to host a single airstrip. There is a post office, bank, supermarket and a hospital, but little else. Fresh water comes by freighter on a 13-hour journey from China's southernmost province.Beijing has created the city administration to oversee not only the rugged outpost but hundreds of thousands of square kilometers (miles) of water, aiming to strengthen its control over disputed - and potentially oil-rich - islands.A spokesman for the Philippines Foreign Ministry said Manila did not recognize the city or its jurisdiction. Vietnam said China's actions violated international law.

The city administration is on tiny Yongxing island, 350 kilometers (220 miles) southeast from China's tropical Hainan Island. The Cabinet approved Sansha last month to "consolidate administration" over the Paracel and Spratly island chains and the Macclesfield Bank, a large, completely submerged atoll that boasts rich fishing grounds that is also claimed by Taiwan and the Philippines. Vietnam and China both claim the Paracels, of which Yongxing, little more than half the size of Manhattan's Central Park, is part. The two countries along with the Philippines, Malaysia, Brunei and Taiwan also claim all or parts of the Spratlys.

This just raises the threat of conflict in the South China Sea. China's way of resolving the multi nation South China Sea issue is not just to lay claim to the whole of China Sea's but today token claim to them as being habitat-ed by China therefore allowing China to militarily fight for them.

Highlights: Asean Summit Breaks Down Over South China Sea Disputes, Philippines says China warship is in its territory, a military aircraft spotted six other Chinese ships near the stricken vessel on Saturday. Japan's plan to buy the disputed Tiaoyutai island group provoked a Chinese live ammunition exercise. China will not sign the South China Sea code of conduct. China, Japan Face Off Near Disputed Islands. China, US seek to calm South China Sea tensions. Plus a recap of what led us to this point if need. If something interests you in this very long and convoluted issue just click on the link and read further!

Asean Summit Breaks Down Over South China Sea Disputes: China's efforts to assert its claims to the disputed South China Sea got a boost as regional talks to resolve the issue broke down despite U.S. support, even as Beijing made fresh moves that underscore its increasing presence in the region.A summit of foreign ministers of the Association of Southeast Asian Nations in Phnom Penh, Cambodia, ended Friday amid tense disagreements over how to address territorial claims in the sea, which is claimed by China and in part by the Philippines, Vietnam, Malaysia, Taiwan and Brunei.

U.S. Secretary of State Hillary Clinton, who attended the talks, had pressed for discussion of a multinational agreement to ease tensions—a move opposed by China, which prefers to negotiate with each nation separately. But Southeast Asian nations argued over how hard to press the Chinese, with countries such as Cambodia resisting any steps that would embarrass China, and the Philippines.

China, US seek to calm South China Sea tensions: The United States and China signaled a willingness on Thursday to work together on "sensitive issues" in a move to cool tensions between rival claimants to the potentially oil-rich and increasingly militarized South China Sea.

Long-simmering tensions in the waters have entered a more contentious chapter this year as the six parties who claim the territory search deeper into the disputed waters for energy supplies while building up their navies and defense alliances. Chinese Foreign Minister Yang Jiechi said Beijing was ready to work with Washington "to expand our common ground, respect each other, properly handle differences on sensitive issues, and push forward" relations.

Why won't China sign the South China Sea code of conduct? (+video) The agreement, raised at the Association of South East Asian Nations in Cambodia, would be the 10th covering essentially the same territorial dispute since the 1982 United Nations Convention on the Law of the Sea. The idea is that it would spell out what ships should do to avoid a clash but it wouldn't actually spell out how to resolve competing claims, according to regional news media.


Now we know why, This is just one more confrontation you can only see ending in war rather than Diplomacy and sharing the wealth!

We are Taiwan's, Vietnam's, Australia's, and Japan's protectors. As China flex's their military muscles in the area we are not supposed to worry. Just what are we supposed to think they are going to do with their advanced weaponry, missiles, stealth aircraft, aircraft carriers and the like. Their threats are going to become more ominous until they cannot be ignored and it is too late. We have been here before. The world was not supposed to worry as Hitler built his arsenal and we know how that turned out.