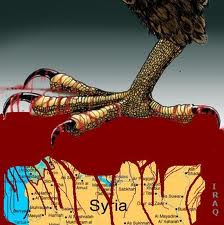 In Depth:Gunmen 'kill three' at Syrian pro-Assad Ikhbariya TV: State TV showed pictures of burnt and wrecked buildings, with fires still smouldering. Syria's information minister, on a visit to the site, said the three victims had been abducted, bound, and killed in cold blood. On Monday, the station was targeted by EU sanctions.The attack comes after fierce clashes in suburbs of the capital Damascus described by opposition activists as the worst there so far. Dozens of people were killed.

Syrian Insurgents Strike a Nerve with Attack: The assault in Damascus on the Republican Guard base began on Monday night and was intended as only a probing attack, according to a lieutenant of the Free Syrian Army whose unit carried it out and who was interviewed by Skype. “It was not a big confrontation, it was just to test the Guards’ capacity, for future attacks,” said the lieutenant, who for security reasons asked to be identified only by his rank. “Our fighters were really surprised by the huge forces that immediately came and encircled the area.”

In an apparently unrelated development, a Syrian Air Force lieutenant general was kidnapped by armed men from his home in Damascus, according to Syrian State Television, who identified him as Lt. Gen. Farage Shihada al-Maqat. He was abducted in the Adawi neighborhood of Damascus, an exclusive area where dignitaries and Russian advisers live. If the report is true, General Maqat would be the highest-ranking officer to be kidnapped or killed since the uprising began. More than 13 generals are among a wave of high-ranking officers who have defected to the opposition recently.

Turkey and Syria are now hostile countries: Turkey will now become all the more generous towards the Syrian rebels. While up until now Turkey was “officially denying” hardware assistance to the rebels, we will probably start seeing a far more free-handed Ankara. If somehow Syrian helicopters or planes violate Turkish airspace (four violations were reported only in June), they will be considered “hostile intrusions” and treated as such.

Yes, there was almost nothing new in what Erdoğan said from the recent statements of Davutoğlu. However, the prime minster made a distinct declaration: Turkey’s relations with Syria are no longer just troubled; Turkey and the Syria of Bashar al-Assad are now hostile countries. Another important statement of the prime minister well-reflected his “democratic” mindset.

Turkey scrambled six F-16 fighter jets in three separate incidents responding to Syrian military helicopters approaching the border on Sunday, its armed forces command said on Monday. It was the second time in as many days Turkish jets were launched in response to Syrian helicopters flying near the border and comes after a Turkish reconnaissance plane was shot down by Syria late last month.

Turkey has beefed up its troop presence and air defenses along the border since the incident and Turkish Prime Minister Tayyip Erdogan said the military's rules of engagement had been changed and that any Syrian element approaching Turkey's border and deemed a threat would be treated as a military target.

As Syrian opposition groups gather in Turkey and continue to unify, a Syrian Helicopter Pilot Defected and Escaped to Turkey. Also a senior intel officer was assassinated and Turkey a neighbor and once close ally closed its embassy and joined the United States sending non lethal aid to the opposition.

Almost 40 Syrian soldiers - including a general and two colonels - have defected to Turkey, according to Turkish state television. Reports said that the general, two colonels, two majors, one lieutenant and 33 soldiers had arrived in Turkey but did not give any more details.

Another channel, CNN Turk, also reported the defections, adding that they had arrived with members of their families, making a total of 224 individuals. The reported defections come a day before an emergency NATO meeting to discuss the shooting down of a Turkish warplane by Syrian forces. Before that a Syrian Colonel defected to Turkey with his Russian Mig 21 fighter jet, that is why I figure Syria shot down Turkey's plane.

At this point the UN has condemned Syria for what that is worth and Turkey has said they would not go to war over recent events but she is sure appearing to be instigating it right now. Russia and China are not going to allow themselves to be kicked out of Syria as would be the case if the opposition gained power.

Likewise, there is also no way Iran is going to let her ally and guard 'Syria" fall to the opposition or more pointedly Democracy and US and Western influence. Nor are they going to sit still while Turkey gets involved which is what I have to say Syria has been counting on.

Syria seems to be baiting Turkey knowing NATO will step up because Syria knows in turn so will Russia China and Iran. I do not like what I see! Syria is China and Russia's last real foot hold in the middle east they and Iran are not going to give this up easily. This is going to take a hell of a long and deadly fight. I fully expect Russia and China to be drawn into this and then the entire middle east will take sides. I hope we can avert WW3 but I would not bet on it!