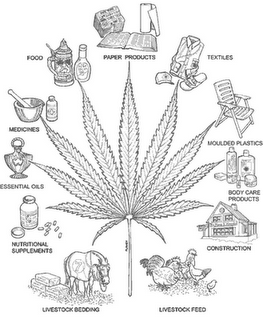 His information we all know is true. This is awesome please give it a quick read. Hemp the most versatile "natural" product in the world.

It's a Safe Health-Food Wonder, Agricultural Dream and Economic Jackpot: It's Time to End our Government's Insane Hemp Prohibition

The Declaration of Independence was written on hemp, our ships had hemp sails, and pioneers' covered wagons were covered in -- what else? -- hemp. David Bronner was recently arrested for attempting to eat a healthy breakfast.

Does that sound stupid? Even once you know the details, it should sound stupid: Bronner's food of choice was bread spread with hemp seed oil he pressed himself from industrial hemp plants, which he did in front of the White House under a banner reading: “Dear Mr. President Let U.S. Farmers Grow Hemp." Bronner's company, Dr. Bronner's Magic Soaps, spends over $100,000 to buy over 20 tons of hemp seed oil from Canada each year to use in its soaps. Bronner wants to give that money to American farmers instead. He is 100% right!

1619 order for every member of Jamestown to grow marijuana.

There were several other “must grow” laws over the next 200 years (you could be jailed for not growing hemp during times of shortage in Virginia between 1763 and 1767), and during most of that time, hemp was legal tender (you could even pay your taxes with hemp — try that today!) Hemp was such a critical crop for a number of purposes (including essential war requirements – rope, etc.) that the government went out of its way to encourage growth.


How many people realized that the first law written within the borders of what we call the United States was a 1619 order for every member of Jamestown to grow marijuana. Watch the documentary "The Union - The Business Behind Getting High". It is one of the best documentaries on the subject ever made.

The first 2 copies of the Declaration of Independence were printed on Hemp! Benjamin Franklin used Hemp to start Americas first paper mills. It was once legal and one of the largest crops in the world. The majority of fabrics, lighting oil, medicines, paper, and fiber. Hemp was touted as a billion dollar crop in the 19th century and its unparalleled universality made it a target of other sources. It produced more than 5000 products from its thread and 25000 from its cellulose including dynamite and cellophane.

They made it illegal because it was the most widely used product in the world and would interfere with other products and diversity. WW2 brought the necessity that it be legalized ounce again as there was so much of it , its wide use, and its abundance. WW2 ended and once again it was made illegal to protect other industries and interests.

The number one abused drug in the world is legal, Alcohol! It destroys numerous lives! What sane argument is there against legalizing Hemp? None, none whatsoever!

Bronner is right! You can not get high from Hemp no matter how much you smoke or eat. Some day common sense should be forced to prevail at least in this one case. Looking at hemp's versatility and the thousands and thousands of products it can be used in you can only come to the conclusion that it was lumped in with marijuana to keep it from competing with more volatile inefficient products. That is especially true today with people looking for natural products. Legalize Hemp!

Cell therapy, and other regenerative medicines such as tissue engineering, comprise a separate therapeutic platform technology to that of the current three pillars of healthcare: pharma, biologics and medical devices. It is certainly a disruptive technology; however, it is not new. The cell therapy initiative has its origins rooted in blood transfusion, bone marrow and organ transplantation, tissue banking and reproductive in vitro fertilization. Stem Cell Therapy

Thanx for the read Jim, this is something that I knew a lil about as well, and the politic's and business that was behind banning it from mainstream, just like the cotton business and lobby as far as getting their product sold instead, etc. But a good posting!

Of course your blog still thinx I may be a robot too : )

Hell RC You're The Man! Really pisses you off hemp at the very least is not legal when you realize how helpful it has been in the past and how useful it is and can be.

This is all kind of silly when you stop to consider that hemp doesn't get you high. And I'm sure we'll need some alternatives when oil gets in short supply.

Just wonder though if Dr Bonner's soap would attract the drug dogs?

It is very silly Demeur especially when you know its numerous varied "natural" uses there in lies the problem! Just imagine how many existing harmful products that "the system" has its money in that would fall by the wayside.