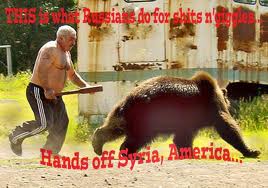 UN Syria Vote Reflects More Assertive Russia Under Putin: The Security Council yesterday unanimously backed sending 300 unarmed UN observers to Syria to monitor a cease-fire agreement between Syrian President Bashar al-Assad’s forces and rebel groups fighting to oust him, even as violence continued. The resolution was crafted by Russia with support from China, nations that had objected to tougher U.S.-backed measures against the Assad regime.
“The Russians will be hoping fervently that this leads to some kind of peaceful resolution between Assad and the opposition in Syria,”

“If you think that not so long ago, after the collapse of communism, Russia became a completely negligible international factor, to be back out there at the table brokering international policy is a big thing for them.” Russia, which has a naval resupply base in the Syrian port of Tartus, is seeking to keep its influence in the country after Assad’s expected departure. Forget about the lie of a peaceful resolution. Beware of what a peaceful resolution is to "Putin's Russia"

Be scared be very scared! The USSR's Mikhail Gorbachev has warned that Russia risks six lost years when Vladimir Putin returns to the presidency, echoing rumblings of dissent over his Kremlin comeback. I always find myself agreeing with Gorbachev but that is putting it mildly. This is bad news for the US and the world to put it mildly!

Russia has agreed to dispatch its monitors, currently deployed in the Golan Heights, to Syria. This came in an announcement by Russian Foreign Minister Sergei Lavrov. “Russia, among others, has been invited by the UN Secretariat to dispatch its observers with the Golan Heights contingent to oversee the Syrian ceasefire. We have given our consent,” Lavrov said at the briefing following his meeting with his Syrian counterpart in Moscow today.

Sergei Lavrov expressed his hope that all other UN states would be just as swift in their answer. Russian Foreign Minister Sergei Lavrov has said that, instead of pinning the blame on Russia and China, the US and others should try and find their “levers” to push for the Syrian authorities and the opposition to stop firing at each other. “We believe that the ceasefire must coincide with the international monitor mission’s arrival in Syria,” he stressed.

Russia said they would send observers almost 2 weeks ago And I have not heard a word from them. There job must be to observe the slaughter and make sure no one gets in Assad's way. China's job must be to say they saw things a different way so none of the awful truth will get out. They will get away with saying it is all being perpetrated by terrorists and a grey area is once again created to hide the truth by someone who supposedly wants to do the right thing. Yeah the right thing for their agenda and that of Assad their ally. This is not a good development. What is going to happen once the observers start getting killed?

This is very concerning. I remember back in 2008 when Putin was going to try and be President for life. He was not alone. Leaders aligned with Russia were all trying to get permanent leadership so they could be at the helm of their prospective countries to take on then President Bush when his war mongering hit the point where Russia, the 135 non aligned Nations, Iran, and others were prepared to join forces and take him and our allies on.

I remember when Bush first met Putin and he said he shook his hand and looked him in the eye and saw a man of compassion, a man who was true to his word, and a man he could work with. I shuttered at Bush's stupidity. I looked at Putin and saw a man deceitful to the core who was not to be trusted period.

We were too pompous then and were pushing the world towards WW3 with our take it or leave it, my way or the highway, interference around the world. Putin was determined to head us off, to directly confront us when we were on Russia's front door trying to instigate war by installing the so called missile shield in Czechoslovakia and Poland, and return Russia to the role of a world leader.

Personally we blew it when Russia broke up and the Berlin wall came down. We were the world leader and had the perfect opportunity to be humble, show we were the leader, and bring the world together to proceed successfully through the 21st century.We egged on the likes of Vladimir Putin who understandably chaffed under our we are the boss do what we say take it or leave it, it your face tactics of Bush and Cheney.

With the return of Putin to the Russian Presidency I am again very concerned and see an end to a partner country whose leaders words and actions we can trust and a return to a confrontational relationship with Russia. I do not like the man, I do not trust the man, and I am very concerned as to which direction Russia and the United States are headed now and at a time when China is surging militarily.

Watching what is happening in Syria and Iran at this point it looks like Russia and China are going to unite at least until the shit hits the fan and it will. Russia is going to go to the limit to allow Syria to slaughter its own. At that point China I am hoping will start backing the US I hope.

Forget any thoughts of a peace deal working. Assad calls the protesters and peace workers terrorists and promises to stamp them out. This has barely begun!

In closing: You know Putin just got himself reelected as President, he did this so he could be at the helm of Russia as he like me knows 100% that world war is our future. He plans on marshaling China who is rapidly building a more formidable military and whoever he can to take on US hegemony.Russia watched helplessly as we had our way in Libya. Putin blames what is happening in Syria on our interference and Libya for training the protesters to fight against Bashar Al-Assad. Russia and Iran will not let this be another Libya but?