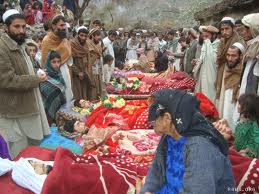 Last year was the deadliest on record for civilians in the Afghan war, with 3,021 killed, according to the United Nations. Taliban-affiliated militants were responsible for more than three-quarters of those deaths. About time!

Taliban-affiliated militants were responsible for more than three-quarters of the civilian deaths in 2011, the fifth year in a row in which the death toll went up, the U.N. said. The figures were a grim testament to the violence the Taliban and allied Islamist militants can still unleash in Afghanistan, even as NATO begins to map out plans for international troops to draw down and give Afghan security forces the main responsibility for fighting insurgents by the end of 2014. Mullah Omar must be quite pleased! 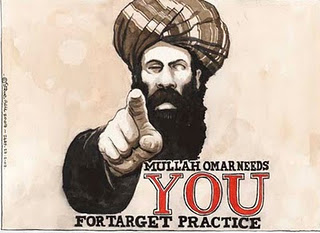 There was 8 Killed in Afghan Bombing Days After Mullah's Rebuke: Afghan officials said the attack in the Baghlani Jadid district of Baghlan Province, which occurred as worshipers left a mosque after prayers on the first day of the three-day Id al-Adha holiday, was carried out by the Taliban. Two days earlier, the Taliban’s reclusive leader, Mullah Omar, delivered his annual message for Id al-Adha, the holiest day of the Islamic year, including a strongly worded statement calling on his followers to refrain from causing civilian casualties.

11 more civilians killed: The Taliban once again killed many civilians including women and children during holy Eid day. This is yet another extreme kind of crime and atrocity by the Taliban," Interioer minister Sediqi said. They are not listening or are they?

Just over a year ago Taliban leader Mullah Omar ordered fighters to kill Afghan civilians, contradicting orders he issued the prior year. Remember that farce they called a code of conduct to protect civilians. Yes civilians are dying from both sides. As usual they get the shit end of the stick!

In a statement, NATO said it intercepted orders that Mullah Omar gave to subordinate commanders at the beginning of June 2010 . It says he instructed fighters to kill Afghans who work with NATO or the Afghan government, and to kill women who provide information to coalition forces. I have to ask what's changed really?

There was no immediate reaction to the claim from Taliban leaders. prior to that, Mullah Omar called on militants to avoid causing civilian deaths when attacking government and foreign troops. NATO says Mullah Omar ordered the Taliban to kill civilians You saw the results, while the west was found to be responsible for much fewer deaths the Taliban were purposely killing as many as possible to show them who was in charge.

More than 1,000 Afghan civilians were killed in armed violence and security incidents in the first six months of 2010, an new Afghan study showed. Afghanistan Rights Monitor says 1,074 civilians were killed between January and June - a slight increase compared with the same period in 2009. However, the number of people killed in NATO air strikes in the same period had halved, the report says. Changes to rules of engagement helped reduce that figure, the report says. Afghanistan civilian casualties on the rise compliments of Mullah Omar

We managed to lower the number of civilians killed so Mullah Omar had ordered the Taliban to kill as many as possible. I would hope the civilians in turn to this so called Mullah slaughtering them at will, will turn on them. Their lives are on the line. They have got to stand up! The militants fighting on fronts from Afghanistan to Pakistan feared they were losing the propaganda war among their own people so the leadership released a new "code of conduct" for fighters in the field. Taliban code of conduct You mean misconduct! Seems they have changed their mind like you change your underwear!

I want us to get the hell out of Afghanistan like we should. If we are lucky enough to have that happen and I have my doubts, the people have a choice. They will still have their tribes but otherwise they have the choice of Mullah Omar who will kill them if they do not live the way he says or the corrupt drug dealer Hamid Karzai.

A long time ago after years of watching Al Qaeda and the Taliban slaughter their own men, women, and children, I realized these are nothing more than all men clubs of disenfranchised thugs. In reality they have nothing to do with Religion other than to use it to keep their destructive clubs in power. I can finally see something that should have been done years ago and that is all Muslims turning on these private clubs of killers, alienating them, and kill them or allow them to self destruct.

But I thought it was like fishing season for them. Spend the winter cleaning your AK 47 and head out in the spring.

I have to laugh, that's it!