China accuses Japan of exaggerating it as a military threat: It is no exaggeration it is called truth and you better be concerned 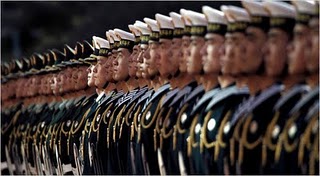 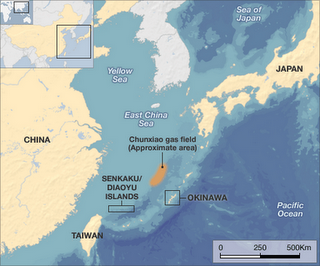 China accuses Japan of exaggerating it as a military threat: The accusation follows a defense white paper earlier this week in which Japan warned that China's naval forces were likely to increase activities around its waters. The two countries have long bickered over ownership of parts of the East China Sea, with the latest flare-up late last year. China's foreign and defense ministries both rounded on the Japan's latest defense report, which laid out worries about China's military modernization and expanding maritime reach.

It is not just the East China Sea, we have talked extensively on China's instigation in the South China Sea but remembering Japan's actions against China before and during WW2 China and that Japan was ultimately defeated China said We hope that Japan will use history as a guide, and earnestly reflect on its defense policies. I believe it is China that should slow down and remember it was the US and her allies that saved her. It is time to share not fight! China has been warning all other Asian Nations not to go after the gas, oil, and other natural resources around the Spratly's, Kurils, Senkaku, and other contested Islands and areas in the China Sea.

China just launched its first aircraft carrier a retrofitted Russian aircraft carrier and is in the process of building it's first Chinese carrier. Anyway then all Asian countries better be prepared. Remember the "incident this past spring with the 10 Chinese warships including destroyers and submarines off Okinawa? This put a new light on things to me. Look at the big picture once again. Japan has got to be rethinking their constant effort to get the US Military to leave Okinawa. It will behoove Japan to have us there. This puts a whole new light on China's turn around on Iran, their monetary finagling, and their last minute turn around on whether or not to attend the nuclear summit. This latest row really has to have Japan rethinking.

Remember Just prior to this sudden mood and cooperation change with the US we were being threatened for arming Taiwan, for meeting with the Dalai lama in Washington, and threatened with slowing our economic recovery. I fell for the line of thought that the so called experts were floating that China realized that if we go down so do they.

Cooperation between China Russia and the US is critical! Obama was right to say our ties will shape the future of the 21st century. The US and China are eying each other and moving very cautiously as they try to strike a balance. A few years back I began to view our relationship with China as the most important in the world. Not because we drove each others economy but because if at the time with Bush's instigation to war with Russia China due to the fact of how our 2 economies are so intertwined that if something happened China would side with us not Russia, I just do not know any more. I never imagined that today problems between China and Japan would be the issue.

As we discussed there have been at least three cases of groups of Chinese military ships crossing through the area of Okinawa since November 2008, first 4 ships then 6 then 8 and now 10 including destroyers and submarines. That case appeared to be the first involving surfaced submarines. The group of 10 ships, including the submarines, was observed about 90 miles (140 kilometers) southwest of Okinawa in international waters.

Two missile destroyers and three frigate ships from the same group were spotted participating in a flight exercise of carrier-based helicopters April 7-9, the Defense Ministry's Joint Staff Office said in a statement The war ships were in international waters but close to Okinawa and Japan was not notified. That area as you may know has natural resources under the ocean and islands claimed by both Nations. It is important that we stay in Okinawa as China plays a more important role in Asia and around the world as she gains strength militarily and economically as we just discussed.

*China is not a threat to Asia? I am afraid they are and also to our old world balance. Japan is right and the entire world better be concerned not just Asia.
Posted by jmsjoin at 2:00 AM

Left you a response over on my blog.

I just am not into foreign affairs at this time. Too disgusted with what's going on here in America the Fourth Reich right now.

Also to burned out to really do any posts for a long time now, however I had to put that one up on Kapo Nazi Eric Cantor.

What a lowlife sack of shit he is and what a disgrace to both the Jewish Religion and Jewish Heritage.

I pray to God that the Angel of Death descends not only down on him but his family as well.

After all the Bible does state that to truly remove evil one must also destroy the seed it has sown to keep it from taking root, rising up and reinfecting the land with its poison.

While I do not condone violence I see no other way for us to restore our Constitution and Rule of Law.

Until every Republican Fascist Nazi is sent back to the Master Satan in Hell America will remain a Dead Nation and Third World Country.

Take care my friend and ...

The Chinese can be contained by regional powers, if need be. Russia, Vietnam, and even the ROK have fairly substantial area presences, and Vietnam has already kicked the shit out of China once.

Their disputes don't concern me much. Foreign menaces are nothing, compared to the ones inside the borders here.

Thanks Anon, super good to hear from you. Cantor is really bade a genuine heel clicker, thing that sucks is Boehner and MnConnell are just too of his many scum. Those scum will not be happy unless they achieve a total collapse and blame it on Obama TO GET BACK IN AND FINISH US AND bUSH'S AGENDA OFF.

It will be4 worse if they do not get in, WTF! ju8st take care and relax if you can.

You are right about our menaces JR most do not realize what is coming because of repugs. That said China is not what she was. I do not see Vietnam , China or any of the others containing her without our help And we are so over extended it isn't funny!