Syrian Children Speak of Revenge Against Alawite's, this will never stop 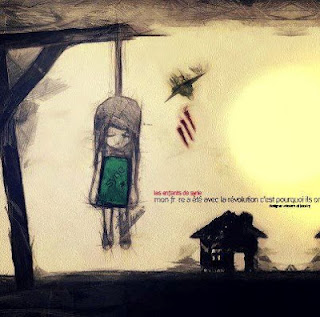 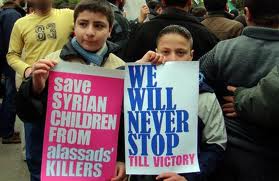 Syrian Children Speak of Revenge Against Alawite's: Like all the small children in the desert refugee camp here, Ibtisam, 11, is eager to go home to the toys, bicycles, books, cartoons and classmates she left behind in Syria. But not if that means living with Alawites, members of the same minority offshoot of Shiite Islam as Syria’s president, Bashar al-Assad. “I hate the Alawites and the Shiites,” Ibtisam said as a crowd of children and adults nodded in agreement. “We are going to kill them with our knives, just like they killed us.”

If the fighters seeking to oust Mr. Assad sometimes portray their battle as a struggle for democracy, the Sunni Muslim children of the Zaatari camp tell a much uglier story of sectarian revenge. Asked for their own views of the grown-up battle that drove them from their homes, child after child brought up their hatred of the Alawites and a thirst for revenge. Children as young as 10 or 11 vowed never to play with Syrian Alawite children or even pledged to kill them. Parroting older relatives — some of whom openly egged them on — the youngsters offered a disturbing premonition of the road ahead for Syria.

It is not that Assad is delusional, him saying the people are still behind him tells you he believes only the Alawite's are people and all other sets are vermin to be eradicated! Also, those Alawite's still behind him are because they now feel they will be eradicated. Though Russia and the US "at the very least" are and will continue to interfere and many minority sects will continue to take a beating this if not at first has now devolved to Sunni against Shiite.


The Origins of the Sunni-Shi'Ite Split - The Flow of History:

Sunni Arabs only make up about two-thirds of Syria. Assad's ruling Alawite sect, an offshoot of Shia Islam, accounts for about 12 per cent. There are a lot of other minorities: Christians, Druze, orthodox Shia and the Kurds, who are Sunni but not Arab. The Alawite's have generally supported Assad. By making the conflict sectarian, Assad does three things. He consolidates Alawite control of vital areas of the country. He binds the whole Alawite community to his fate, because Alawite's now know there will be fearsome revenge killings of their people if Assad is toppled. And he radicalizes the Sunni opposition.

I agree with Hilary! Iran and the IRG have been doing much of the slaughtering since the beginning. They openly admitted a month ago that they were going to take the lead role in slaughtering as many as they had to in order to quell the uprising and keep Russia and Iran's interest in control. I no longer believe that will be the case regardless of what Iran and Russia do. They have kept the misery perpetrator in power too long and allowed the people to be slaughtered. The people now will not rest until they see to their demise!

What we saw after the voter fraud in Iran was mild compared to what the IRG will do if this movement spreads to Iran. I really wish Bashar would step down but Iran is the elephant in the room any way you look at it. The total middle east breakdown we have written about numerous times is well under way. We can only hope we keep it from erupting into WW3.

At the very least the rebels will in the end know they are not fighting only the Alawite minority but Lebanese and Iranian IRG.

They are being slaughtered compliments of Russia and China in the first battle to control the direction of the world into the future.

Any way you look at it the Russian's and Chinese have drawn the line on what they view as US hegemony and with the blood of the Syrian people. Taking us on is why Putin stole himself an extended election. This is just the opening battle in the war to determine who is going to lead the way into the future. It will not be short or good. As time progresses wars do not get easier they get much worse. Be very concerned!

We can still be guaranteed the United States is going to be dragged into this one way or the other, you know along with the rest of the world we are already there clandestinely. This is looking good but the US can not be foolish enough to believe that one strategic bombing will make the Government fall or that a safety zone for the millions displaced will not bring an Assad attack in hopes of widening this. I absolutely believe Assad will use those chemical weapons on his own supporters and people as all he sees is his regime in trouble and a last chance to kill the vermin "terrorist" protesters.

Oh this goes far deeper into the distrust of so many factions here. I was just reading about Lebanon's recent history and their distrust of each other.
I made a comment on one of their blogs about the recent anti islamist movie. I'll be interested to see their response. Short version - With democracy comes free speech and we may detest what others say but that is the price we must face for the freedom.

From what I've read so far this is still all about the oil and water wealth and the power to maintain it. But with Lebanon it's about having a voice in a splintered government. It was not long ago that Syria pulled it's troops out of Lebanon so I'll be interested to see if this spills back over the borders once again.

You know Demeur I have commented on some in the past too and never got any feed back. I wish they were set up to get notification and maybe reply.

Syria is crazy complicated with minorities but the middle east is exploding. I have written about it so many times but it is not going tot be pleasant to watch!