French Weekly Publishes Caricatures Of Prophet Muhammad: Are we just asking for it? 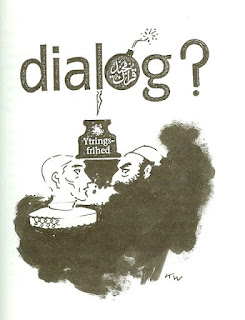 French Weekly Publishes Caricatures Of Prophet Muhammad: The French satirical weekly "Charlie Hebdo" has published a series of cartoons ridiculing the Prophet Muhammad. The cartoon on the back of the current issue shows the Prophet naked, as do several other images inside the magazine. The French Foreign Ministry has ordered increased security at diplomatic sites around the world in anticipation of a possible violent reaction from offended Muslims.

The publication of the caricatures comes as passions around the Islamic world are already inflamed by the trailer of an obscure low-budget film that mocks the Prophet Muhammad. That film, which was privately made in the United States, has sparked days of rioting that have left at least 19 people dead.

We are still dealing with the aftermath of that anti Muhammad spoof showing him as a blood thirsty womanizer. A U.S. law enforcement official says a man named Nakoula Basseley Nakoula is behind the anti-Muslim film being blamed for mob attacks in Egypt, Libya and Yemen. A man who calls himself Sam Bacile has said he created the film, but The Associated Press on Wednesday connected Nakoula to the Bacile persona.The official spoke on condition of anonymity because he was not authorized to discuss an ongoing investigation.

You may know but I did a diary on this subject five years ago. However with all the blogs and reporting on them and the results of printing them one very important point among many has yet to be mentioned. First I have to question the wisdom of the Danish paper for getting involved with this in the first place knowing the volatile state of relations between Muslims and the west and the seriousness in which most Muslims take to having Muhammad blasphemed.

Just what religion if any is the person who gave the okay to print anyway? Also supposedly freedom of speech was the issue which motivated the printing but in reality what was the real motivation behind it? Protests, riots, and deaths, continue to increase and worsen around the world. What else could possibly have been expected?

I agree with free speech. I also believe to each his or her own. Leave well enough alone that works too. Above all I believe in engaging brain before acting. Just what was the thought process if any in the first place. We have freedom of speech yes! I think it is too late but we have to think about the consequences of exercising it at least for the moment at a time when we should be trying to quell anti western feelings not fueling the fire.

It seems to me like these cartoons have done the trick for Muslim extremists anyway. They have succeeded in uniting Muslims where we have until now failed to do with our ineptitude in dealing with the Muslim world. We have finally united the majority of Muslims against the west and we now have take off. I ask again, what could have possibly been the expected outcome and whose side was this Danish paper on in the first place?

Also, remember the US charged a Chicago man in the 2008 Mumbai attack? I mention it because he also tried to attack the Danish newspaper that published the Muhammad cartoons: Two days prior to that I republished by coincidence the cartoons of the Islamic Prophet Muhammad published in early October 2005 in a Danish newspaper as they outraged Muslim’s around the world and that was only one of the many things we keep doing to seemingly taunt Islam. What took them so long to apologize for their insensitivity?

Regardless it is too late! This as most know is just one of many issues the extremists will continue to use to drum up anti- west sentiment to keep UBL's personal anti Muslim and anti west vendetta alive. Now what will they do?